Immigrants who learn English well make their way much more easily in the United States than those who do not. They can obtain a higher level of education and better-paying jobs than people with limited English language skills (Bleakley and Chin, 2004; Carnevale, Fry and Lowell, 2001). They can navigate complex paperwork, understand political debates and introduce themselves to their neighbors. Knowing some English is a requirement for citizenship, the ultimate bond with the United States.

Previous research by the Pew Hispanic Center shows that English use is linked to assimilation (Pew Hispanic Center and Kaiser Family Foundation, 2002). Latino immigrants who know English well and use it often tend to have attitudes and opinions on social values, gender roles and faith in government that are closer to those of non-Latinos than do immigrants who use mainly Spanish. 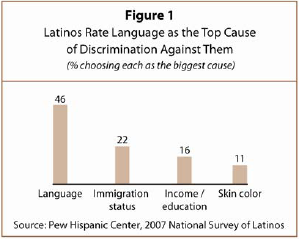 Latinos believe that English is necessary for success in the United States, according to the same previous research. Asked whether adult Latinos “need to learn English to succeed in the United States, or can they succeed even if they only speak Spanish,” 89% of Hispanics in the 2002 survey said that they need to learn English. Slightly more Spanish-dominant Hispanics (92%) voiced this belief.

The other side of the coin is that many Latinos believe that inability to speak English well is the leading cause of discrimination against Hispanics. And discrimination is seen as a major problem in keeping Hispanics from succeeding in America: It was cited by 44% of Latinos in the 2002 survey, 58% in the 2006 survey and 54% in the 2007 survey. 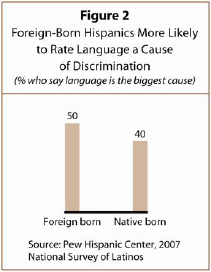 The issue of immigrant language skills is a timely one because the United States is in the midst of the largest influx of immigrants in a century. According to the Census Bureau’s 2006 American Community Survey, an estimated 37.5 million authorized and unauthorized foreign-born residents live in the United States. That is a record in absolute numbers but still a somewhat smaller proportion of the total population than was the case a century ago. Foreign-born residents make up 13% of the population today, compared with 15% in 1910 (Gibson and Lennon, 1999). These newcomers increasingly arrive in communities that have not seen many immigrants in recent years and may not be ready for them. Small cities and towns all across the country are joining traditional gateway cities such as New York and Los Angeles as destinations for Hispanic immigrants.

The language skills of these foreign-born residents are one flash point in a broader U.S. political debate over immigration. For some, the presence of millions of U.S. residents who do not know English well is an indicator that U.S. society is unable to absorb so many new arrivals. Others assert that there is no threat to the dominance of English, because the second and third generations will learn the language, just as children of immigrants did during previous waves of immigration.

Our analysis finds that the ability to speak English and the likelihood of using it in everyday life rise sharply from Hispanic immigrants to their U.S.-born adult children.

Fewer than one-in-four Latino immigrants (23%) reports being able to speak English very well, compared with 88% of the second generation and 94% of later generations. Reading ability follows a similar trend from one generation to the next. Hispanic immigrants are most likely to speak and read English very well if they are college-educated, arrived in the United States as children or have spent many years here. Puerto Ricans and South Americans report the highest levels of ability in English, and Mexicans the least.

In general, Hispanic immigrants do not primarily speak English at home or at work. They are, however, more likely to use English on the job than at home. Most of their children primarily speak English at home and at work. Spanish retains its hold on the second generation, about half of whom speak only Spanish, mainly Spanish or Spanish and English equally at home. By the third and higher generations, that falls to one-in-four.

How do the patterns we found resemble or differ from those experienced by the last great influx of immigrants a century ago? The broad trajectory appears to be similar. Researchers generally agree that immigrants who arrived a century ago largely spoke their native language, especially at home. Their U.S.-born children used English and their parents’ native tongue. The children of U.S.-born parents—i.e., the grandchildren or later descendants of immigrants—spoke mainly or only English.

It is difficult to compare how quickly immigrants acquired good English skills because there is a lack of consistent data over time (Stevens, 1999). But many researchers agree that education level, age of arrival and length of residence in the U.S. serve as markers—in the past just as in the present—that predict how well an immigrant speaks English. Research on previous generations of immigrants also has found that living in a non-English-speaking enclave delays the learning of English, a finding echoed in more recent research (Labov, 1998).

This report begins by analyzing differences in English ability and use among several generations of Hispanics: Latino immigrants; their U.S.-born children; and the children and later generations of U.S.-born Hispanics. From the first generation to those that follow, we see a nearly complete transition from Spanish to English dominance.

Subsequent sections focus mainly on Latino immigrants, looking at the extent to which their English-speaking ability is linked to the number of years they have spent in the United States, their education level and how old they were when they arrived. We also examine the impact of country of origin.

This report also includes sections on citizenship and language ability, on use of English and Spanish in the workplace and on bilingual speakers.