Forty-four percent of Latino adults do not use the internet. The offline Latino population is characterized by lower educational attainment and a lower likelihood to speak English. Fully 69% of Hispanics who did not complete high school and 68% of Spanish-dominant Hispanics are offline.

Of Latinos who do not go online, 53% say they simply do not have access. In addition, 18% of non-user Latino adults say they are not interested in going online, 10% say going online is too difficult or frustrating, 6% say it is too expensive to get access, and 5% say they are too busy or do not have the time to go online.

The communications revolution is not limited to the computer screen. A recent Pew Research Center survey found that Hispanics are more likely than non-Hispanics to consider the cell phone a necessity, rather than a luxury. Fully 59% of Hispanics consider them a necessity, compared with fewer than half of non-Hispanic whites (46%) and non- Hispanic blacks (46%).12

Cell phone ownership is associated with essentially the same demographic characteristics as internet usage. For example, cell phone use is markedly lower for Spanish-speakers: 42% have a mobile phone, compared with 75% of English-dominant Latinos. Nativeborn Latinos are more likely than foreign-born Latinos to use a cell phone – 72% versus 50%. However, Latinos over age 60 are more likely to have a cell phone than an internet connection, which is also true in the non-Hispanic population. 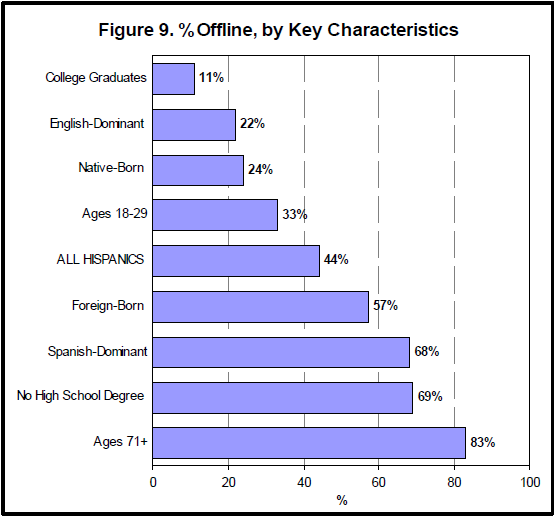 Latinos Online II. Latinos in the U.S. III. Latinos Online
IV. Latinos Offline
Latinos who do not go online are likely to say they simply do not have access to the internetSix in ten Latino adults have a cell phone and half send or receive text messages
Methodology