Although there have been occasions in the past when immigration has been higher in relation to the size of the country’s population, the number of immigrants coming to the United States has reached unprecedented levels in each of the last three decades (Figure 8). Accurate measurement of immigration is important for developing measures of the total U.S. population and for formulating and evaluating public policy on a variety issues at the local, state and federal levels. Unfortunately, the United States does not have very good data on the numbers of new immigrants arriving in the country each year and no single source of data adequately measures such flows. Available data from immigration agencies are generally designed for administrative purposes rather than as measures of the number of people moving into the United States; immigrants arriving outside legal channels have increased numerically and as a share of the total inflow. Some of the serious measurement and tracking issues include: 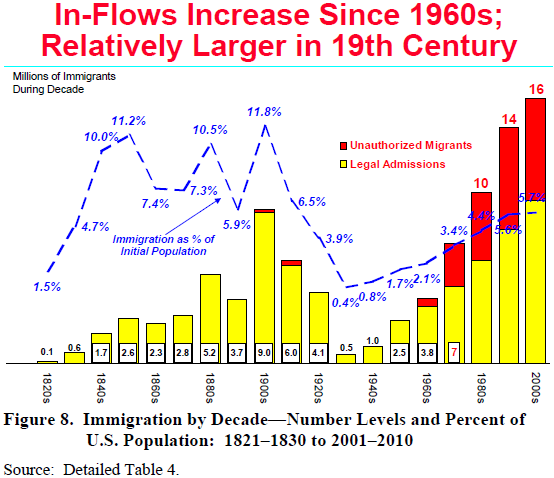 Large fluctuations in the number of immigrants arriving in the United States have occurred at various times in the nation’s history, notably during and after the Civil War, coincident with economic swings in the late 19th century, and before and after World War I (Figure 9). From the 1930s through the 1980s, variability in annual admissions decreased substantially. Since then, large swings in admissions have again become the norm. Unlike the situation a century ago, however, the current fluctuations do not seem to reflect real changes in the numbers of people entering the country or the numbers wanting to come. While the pattern of annual flows portrayed in the foregoing analysis is very roughly mirrored in the federal government’s administrative data on the processing of key categories of legal immigrants and visitors, the increases in “green cards” and arrivals of students and other temporary migrants that occurred through the 1990s to 2001 and then the subsequent declines appear to reflect processing backlogs, security delays and other developments that followed the September 11 attacks. 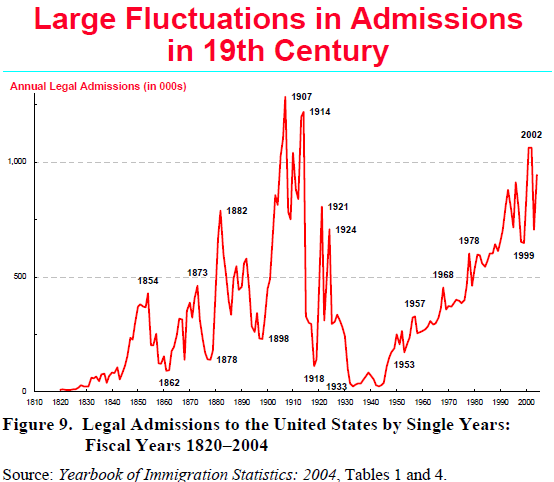 Measures of the size and composition of the foreign-born population have traditionally drawn on data from the decennial census and two annual surveys conducted by the Census Bureau—March Supplements to the Current Population Survey (CPS) and the American Community Survey (ACS). These data provide an excellent basis for assessing impacts of immigrants. However, comparison of the size of the foreign-born population from one year to the next is not an adequate method for measuring annual changes in size or for measuring inflows. With the number of foreign-born residents reaching 35 million, the standard error (or sampling variability) of the annual change is so large that the year-to-year difference can vary substantially due to random measurement factors. Thus, while the overall trend in foreign-born growth is clear from the annual population totals (Detailed Table 3), it seems unlikely that the annual changes fluctuated between about 84,000 as measured by the 1995–1996 CPS difference to the more than 1.9 million difference between the 1999 and 2000 CPSs. The larger samples of the ACS seem to produce less fluctuation in measured change in the foreign-born population, but other problems remain before year-to-year changes can be converted into inflow estimates.

Annual inflows of new immigrants account for only part of the annual change in the foreign-born population. In demographic terms, there are three components that account for changes in the size of the foreign-born population. The largest is the arrival of new immigrants, now numbering well over 1 million per year. The other two are deaths of immigrants living in the country and outmigration (emigration) of former immigrants. Neither of these flows is small. During the 1990s, deaths of the foreign-born averaged 200,000 to 250,000 per year. This component can be measured directly by vital statistics and its adequacy can be assessed with conventional analysis of mortality data. However, measurement of emigration has been especially problematic. Original estimates for the 1990s were about 275,000 per year (Robinson 2001; Passel 2001). However, new estimates (Van Hook, et al. 2004) suggest that true levels of emigration were probably somewhat higher. Unfortunately, even with current methodological improvements, the available methods and data do not permit development of precise annual estimates of emigration required to convert changes in the foreign-born population into measures of newly arriving immigrants.

Next: VIII. Immigration Measures from the Census, ACS and CPS
← Prev Page
Page1Page2Page3Page4Page5Page6You are reading page7Page8Page9
Next Page →