This report analyzes labor market outcomes for Hispanic and immigrant workers in the one-year period from the fourth quarter of 2003 to the fourth quarter of 2004. The present section of the report sets the stage by reviewing trends in the major labor market indicators from 2000 to 2004. The main analysis begins in the second section which reports on changes in employment and related outcomes in 2004. The third to fifth sections examine changes in employment by selected characteristics of workers and occupations. That is followed by an analysis of the concentration of immigrant Hispanics in specific occupations. The final section presents data on the wages of different groups of workers.

The analysis of long-term trends in this section finds signs of improvement in the major labor market indicators in 2004. The improvement for Hispanic workers, especially in the unemployment rate, was more notable than for non-Hispanic workers. As a result, Hispanic workers closed the gap in the unemployment rate in comparison with non-Hispanics and this gap is now the smallest it has been at any point since 2000. For some indicators the progress in 2004 was the first positive development since 2000. Employment growth began to keep pace with changes in the working-age population and the ongoing decline in the propensity of workers to participate in the labor force was partially stemmed in 2004. But participation in the labor force remains at low levels compared with 2000 and suggests a lack of confidence on the part of both Hispanic and non-Hispanic workers.

The long-term trends in key labor market indicators and their progress in 2004 are summarized in Charts 1 to 3. The year 2000 was the highpoint for all major employment related indicators. The unemployment rates for Hispanics and non-Hispanics were at their lowest levels in decades—below 6 percent for Hispanics and less than 4 percent for non-Hispanics. Similarly, a greater proportion of the working-age (ages 16 and older) population, as measured by the employment-to-population ratio, was employed in comparison with previous decades. Fueled by high demand, the proportion of the working-age population choosing to participate in the labor force, or the labor force participation rate, had also climbed to its highest level in decades. But all this came to an end with a recession in 2001 and an economic slowdown that persisted into 2003. The unemployment rate increased from the beginning of 2001 to the middle of 2003 and the employment-to-population ratio and the labor force participation rate fell steadily from 2001 to the end of 2003. In a long awaited development, the first positive signs of change appeared in mid-2003 when job growth began to accelerate for both Hispanic and non-Hispanic workers.4 These gains have been largely sustained through 2004. 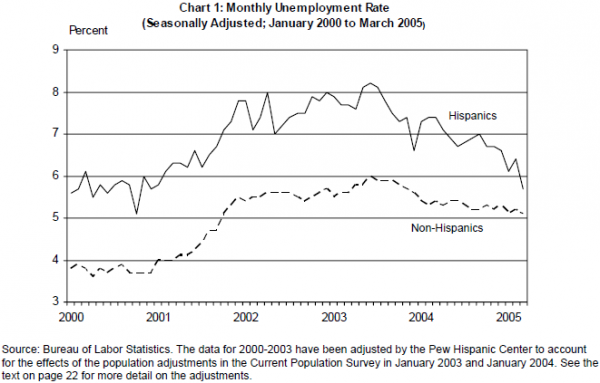 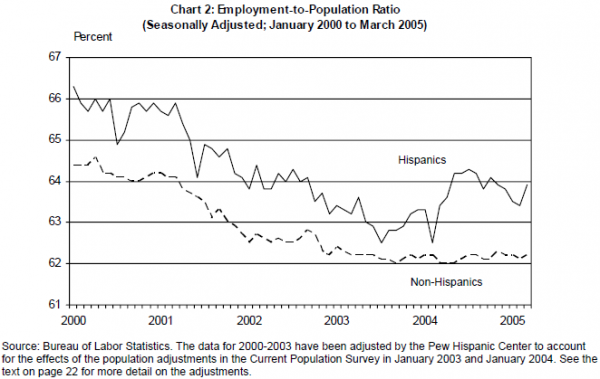 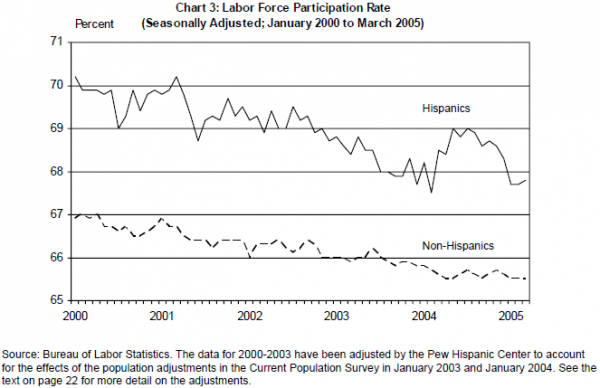 In sum, long-term trends in key labor market indicators showed improvement in 2004, largely for the first time since 2000. Progress for Hispanic workers, especially with respect to the unemployment rate, was more rapid than for non-Hispanic workers. The growth in employment also kept pace with the change in the working-age population for the first time in five years. But, compared with 2000, the labor force participation rate remains at low levels and reveals a lack of confidence on the part of both Hispanic and non-Hispanic workers. The lack of improvement in the labor force participation rate means that there is a pool of workers waiting to reenter the labor market as economic conditions improve. When they return to the labor force, many will count among the unemployed until they secure a job and the initial result could be an increase in the unemployment rate. Thus, it will take more rapid economic growth to sustain both an increase in labor market participation and a reduction in the unemployment rate for all workers.

Next: III. Changes in Employment in 2004
← Prev Page
Page1You are reading page2Page3Page4Page5Page6Page7Page8Page9
Next Page →