An estimated 1.0 million to 1.2 million unauthorized immigrants lived in Germany in 2017, up from 500,000 to 600,000 in 2014, according to new Pew Research Center estimates based on the latest available data. The 2017 estimate includes 444,000 asylum seekers who were waiting for a decision on their case at the end of that year. 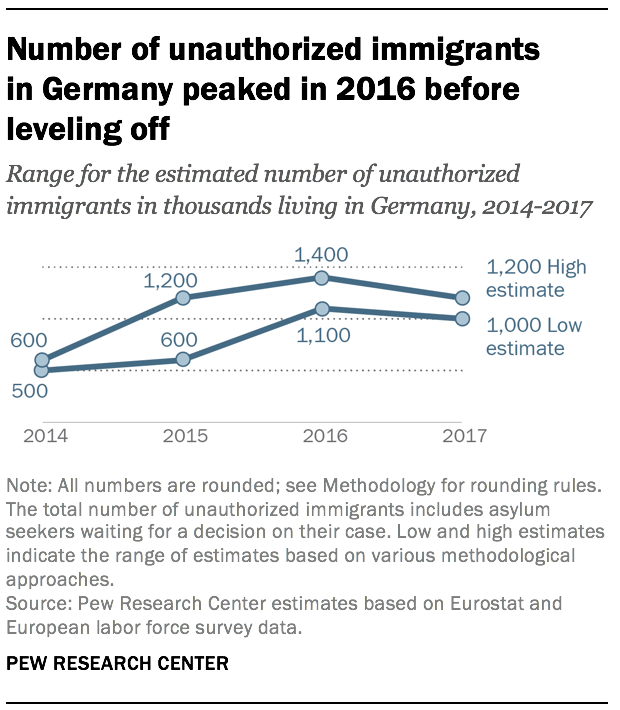 Unauthorized immigrants are non-EU-EFTA citizens who entered Germany without permission and face obstacles to permanent residency. The population also includes those who may have entered lawfully but overstayed a visa. Asylum seekers waiting for a final decision in their case are also included in the unauthorized immigrant population estimates since their future status is uncertain – most entered Germany without authorization and face high rejection rates.

In Germany, those granted Duldung, a temporary protection from deportation (some 166,000 at the end of 2017), are also considered part of the unauthorized immigrant population in the Center’s estimate. Those with subsidiary protection, however, are not considered unauthorized immigrants. Although many in this group entered the country without authorization and were not granted refugee status, many have a path to longer-term permanency in the country.

The Center’s estimates for Germany are similar to those published elsewhere. A separate 2014 study estimated 180,000 to 520,000 unauthorized immigrants lived in Germany in 2014, not including asylum seekers waiting for a decision on their case. The Center’s estimate for the same year was 300,000 to 400,000 without asylum seekers, within the range of this other estimate. Our 2017 estimate for Germany of 600,000 to 700,000 unauthorized immigrants excluding asylum seekers is in line with expected trends given the high level of migration in 2015 and 2016.

For more information about the unauthorized immigrant population in Germany or other EU-EFTA countries, see the Center’s full report.