From 1990 to 2017 the inflation-adjusted per capita gross domestic product (GDP) calculated by purchasing power parity (PPP) improved dramatically in most nations, according to World Bank data.

But in many advanced economies, expectations that such economic good fortune will continue into the next generation are notably absent. A median of 56% in the 18 relatively well-off nations surveyed actually expect their country’s children to be worse off financially than their parents. Just 34% think they will be better off.

The dichotomy between recent personal experience and future expectations is strikingly evident in key countries. Per capita GDP on a PPP basis grew 56% in Australia in the last quarter-century, 46% in the United States, 45% in Germany, 41% in Canada, 31% in France and 28% in Japan. But in 2018, nearly two-thirds of Australians (64%), more than half of Americans (57%) and Germans (52%), two-thirds of Canadians (67%), about three-quarters of Japanese (76%) and eight-in-ten French (80%) hold the view that children today in their country will not grow up to be better off financially than their parents. One of the greatest disparities between experience and expectations is in South Korea, where per capita GDP grew 209% since 1990, but 53% of adults say today’s children will not fare as well as their parents.

Among the advanced economies surveyed, only Poles and Russians are even mildly optimistic. Nearly six-in-ten Poles (59%) and roughly half of Russians (51%) expect their young to grow up to be better off. The Poles may have some reason for such optimism; their incomes have grown 165% since 1990. Russians have less reason to be optimistic; their per capita GDP has grown by only 20%.

Such optimism or pessimism about prospects for the next generation is largely unchanged in many advanced economies since last year, with a notable exception of Poland, where the portion of those who expect children to be better off has gone up 11 points. 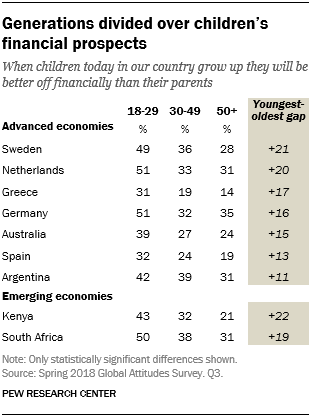 In only a few countries do young adults see the future more positively than their elders. In Kenya, the young (43%) are more likely than their elders (21%) to be hopeful about the future. In Sweden, those ages 18 to 29 are more likely — by 21 points — than those ages 50 and older to expect today’s children to be better off financially than their parents. There is also a similar 20-point generation gap in the Netherlands. And in South Africa, it is the young (50%) who are more positive about the financial prospects of today’s children than are older South Africans (31%)

Pessimism about children’s future is a partisan issue in some advanced economies. In the U.S., 45% of Republicans and Republican-leaning independents believe today’s kids will be better off than their parents; just 24% of Democrats and Democratic-leaning independents agree. In Sweden, 21% of those with a favorable view of the right-wing populist Sweden Democrats say young people will be better off financially in the future, while 43% of those who do not see the Sweden Democrats positively are optimistic.

Notably, in Poland and the UK, those with favorable views of right-wing populist parties are more optimistic. Among Law and Order (PIS) supporters, 68% see the future as bright for Poland’s young people, compared with 52% of the rest of the public. In the UK, 36% of UKIP backers are upbeat; just 20% of others share that optimism.

In emerging economies, recent economic experience has buoyed hope for the future among some. Indian GDP per capita has increased 266% since 1990, and such good fortune in about a generation may explain why two-thirds of adults (66%) believe young Indians will grow up to be better off financially than their parents. In the Philippines, per capita GDP has grown by 90%, and 69% of Filipinos are optimistic about the economic prospects of the next generation.

Such optimism is not universal in emerging economies, however. Nearly two-thirds of Tunisians (64%) are pessimistic about the financial future of their younger generation, despite a 93% increase in per capita GDP. Roughly half of Brazilians (53%) say kids today in their country will be worse off in the future, possibly reflecting a more modest 36% improvement in per capita income over the last quarter-century.

Next: 3. Is the present better than the past?
← Prev Page
Page1Page2You are reading page3Page4Page5Page6Page7Page8
Next Page →