Access to the internet is considered so vital that in 2016 the United Nations passed a nonbinding resolution to make disruption of internet access a violation of human rights. And while governments and private companies are working to increase access to the internet the world over, many in emerging and developing countries remain non-internet users.

Across the 39 countries, a median of 75% say they either use the internet occasionally or own a smartphone, our definition of internet use. In many advanced economies, nine-in-ten or more use the internet, led by South Korea (96%). Greece (66%) is the only advanced economy surveyed where fewer than seven-in-ten report using the internet. Conversely, internet use is below seven-in-ten in 13 of the 22 emerging and developing economies surveyed. Among these countries, it is lowest in India and Tanzania, at a quarter of the adult population.

Regionally, internet use is lowest in sub-Saharan Africa, where a median of 41% across six countries use the internet. South Africa (59%) is the only country in the region where at least half the population is online.

Globally, young people use the internet more than older generations

Education is also a dividing factor on internet use, with significant gaps between those with more and less education in all countries surveyed. In all but five, these differences are in the double digits. 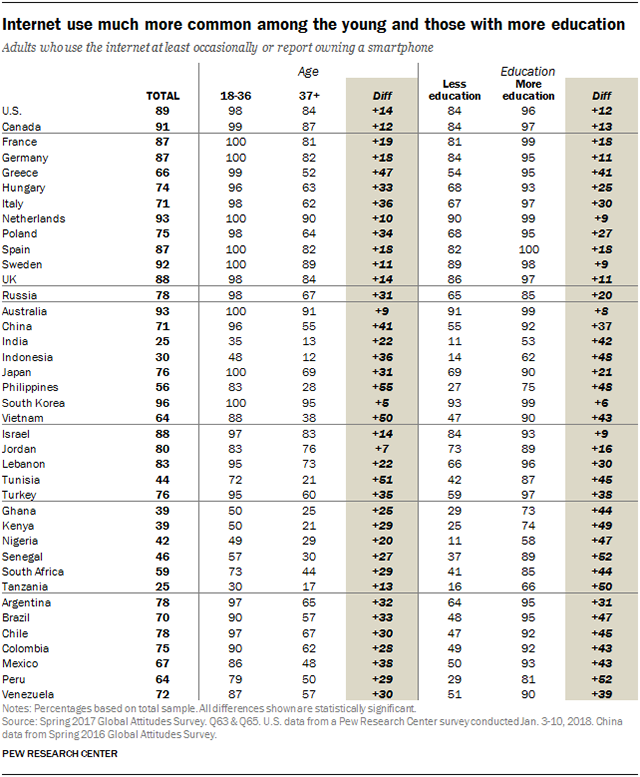 While age and education gaps on internet use were found in all countries surveyed, gender gaps are far less pervasive. There are significant differences between men’s and women’s use of the internet in just 12 of the countries surveyed. And in only one of these 12 countries – Lebanon – are women more likely than men to use the internet (87% and 79%, respectively).

The gender gap is most apparent in Africa, with men more likely than women to use the internet in Tunisia, Ghana, Kenya, Nigeria, Tanzania and Senegal. There are also double-digit gender gaps on internet use in India and Japan.

Next: 2. Smartphone ownership on the rise in emerging economies
← Prev Page
Page1You are reading page2Page3Page4Page5Page6Page7Page8Page9Page10
Next Page →

The Future of Well-Being in a Tech-Saturated World
Social Media Use in 2018
Publics Globally Want Unbiased News Coverage, but Are Divided on Whether Their News Media Deliver
Smartphone Ownership and Internet Usage Continues to Climb in Emerging Economies
Internet Seen as Positive Influence on Education but Negative on Morality in Emerging and Developing Nations
Jewish Americans in 2020
Defining generations: Where Millennials end and Generation Z begins
7 key findings about religion and politics in Israel
What We Know About Gen Z So Far
Key facts about Americans and guns