Across 39 countries, a median of 53% say they use online social networking sites like Facebook or Twitter. However, that figure conceals large differences around the world, and the relationship between social media use and national wealth is not as strong as it is for overall internet use and smartphone ownership.

Some large advanced economies also stand out for relatively low levels of social media use. In particular, in Germany (40%) and Japan (39%), about four-in-ten use social media – similar to the percentages in South Africa (43%) and Tunisia (38%).

Just one-in-five adults in India and Tanzania use social networks, and all five sub-Saharan African countries surveyed report social media use below the global median. 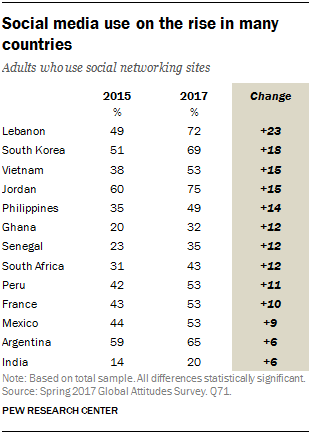 Generational divide on social media use

Across the globe, younger adults are much more likely to report using social media than their older counterparts. For example, in the Philippines, nearly eight-in-ten adults age 36 and under (78%) are on social media, compared with just two-in-ten older adults – a 58-percentage-point difference. This generational divide is prominent in every country surveyed.

Divergent aging patterns might also help explain variations in social media use across certain countries. For example, in Japan and Germany, social networking sites are quite popular among young adults; 82% and 74% of those ages 18 to 36 are on social media, respectively. However, the median age is 47 in both Japan and Germany. There simply aren’t many young adults in these countries. 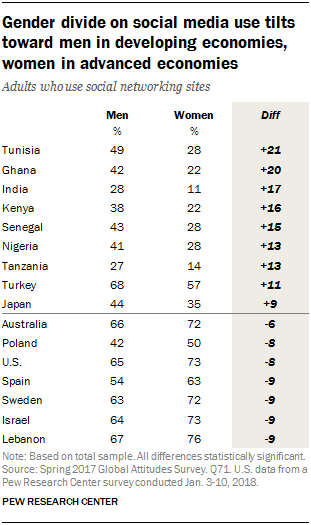 By contrast, like many Arab countries, Lebanon and Jordan are experiencing a “youth bulge”: The median age is 31 in Lebanon and 23 in Jordan. The age differences in these countries aren’t as drastic as in Germany and Japan – a 34-point gap in Lebanon and 8 points in Jordan – but the large youth population contributes to high social media use.

In some emerging and developing countries, men are much more likely to use social media – in Tunisia, for example, 49% of men use social networking sites, compared with just 28% of women.

However, in advanced countries, social networking is often more popular among women. In the U.S., Spain, Sweden and Israel, women are more likely to use social networking sites, even when accounting for internet use. In Sweden, more women are on social media than men (72% to 63%), even though men are more likely to use the internet than women (94% to 90%).

There are significant differences in social media use across other demographic groups. Those with higher levels of education and those with higher incomes are more likely to use social network sites.

Next: Acknowledgments
← Prev Page
Page1Page2Page3You are reading page4Page5Page6Page7Page8Page9Page10
Next Page →