Recent years have seen turbulent shifts in public attitudes toward the European Union. Down just a year ago, before the Brexit vote in the United Kingdom, public sentiment about the European project has rebounded. Even British voters, who narrowly elected to withdraw from the EU, have markedly improved their views of the Brussels-based institution. 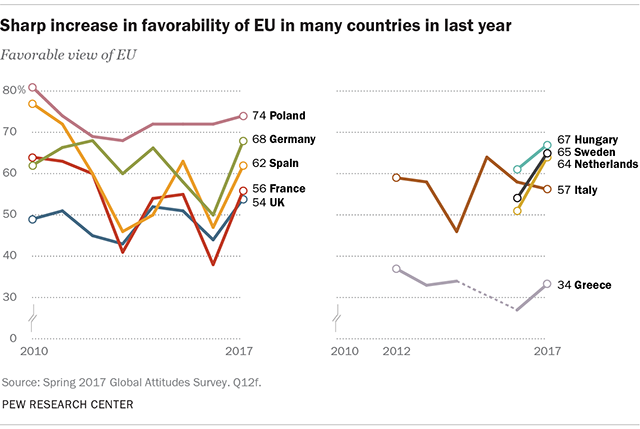 But while few citizens on the European continent are eager to see their own country depart the EU, many want the chance to have their voice heard through their own referendum on EU membership. Moreover, frustrations with Brussels remain when it comes to economic management and dealing with the refugee issue. Asked whether they would like their national government to make decisions about the movement of people into their country and trade with other nations, roughly half or more across the countries surveyed answer, “Yes.”

These are some of the key findings from a new Pew Research Center survey, conducted among 9,935 respondents in France, Germany, Greece, Hungary, Italy, the Netherlands, Poland, Spain, Sweden and the United Kingdom from March 2 to April 17, 2017. Together, these 10 European Union member states account for roughly 80% of the EU population and 84% of the EU economy. 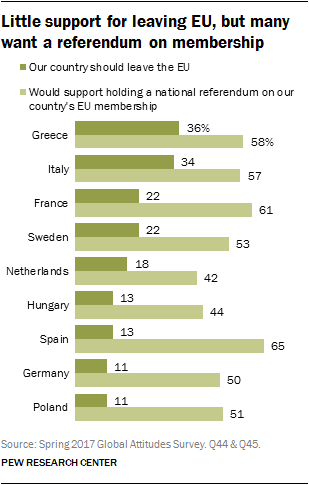 When asked about the ramifications of the UK’s impending exit from the EU, publics in other member states generally agree that the British departure will be bad for the EU. They are less certain what Brexit will mean for the UK.

A median of just 18% in the nine continental EU nations surveyed want their own country to leave the EU. Greece and Italy are home to the largest support for exit, but even in these countries more than half want to remain a part of the European project.

That does not necessarily mean these publics are satisfied with the current state of affairs in Europe. Perhaps reflecting frustrations with whether their voices and concerns count in Brussels, a median of 53% across the nine European countries, excluding the UK, support having their own national referendums on continued EU membership. (For more on Europeans’ views on their voices being heard, see the Center’s 2014 survey “A Fragile Rebound for EU Image on Eve of European Parliament Elections.”) 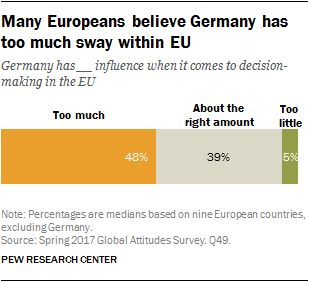 With Brexit looming, Germany’s influence in the EU is likely to grow. While Europeans have an overwhelmingly favorable view of Germany, a plurality (a median of 48%) believes Berlin has too much influence when it comes to decision-making in the EU.

Even as many Europeans want key powers to be transferred from Brussels to national capitals, local politics are far from stable. The past year has seen close, contentious elections in a number of EU member states, as well as newer political movements and parties outperforming established organizations. Overall, few political parties enjoy broad popular support. The survey asked about a total of 42 parties across the nations polled, and only five of those parties received a positive rating: two in Germany (the Social Democrats and Christian Democrats), two in the Netherlands (the People’s Party and the Socialists) and the Swedish Social Democratic Party. Ratings are especially grim in Greece, where no party is seen favorably by even a quarter of the public. Parties on the far right – such as France’s National Front and the United Kingdom Independence Party (UKIP) – generally get relatively low ratings.

CORRECTION (June 2017): The data in this report and the accompanying topline have been corrected to reflect a revised weight for Greece and Italy in 2017. The changes due to this adjustment are very minor and do not materially change the analysis of the report.

Next: 1. EU back in favor, but Brussels’ handling of economy and refugees still questioned
← Prev Page
You are reading page1Page2Page3Page4Page5Page6Page7
Next Page →

Post-Brexit, Europeans More Favorable Toward EU
1. EU back in favor, but Brussels’ handling of economy and refugees still questioned 2. Most Europeans judge Brexit as bad for EU and UK 3. Favorable views of Germany don’t erase concerns about its influence within EU 4. Few political parties in Europe have widespread appeal Acknowledgments Methodology