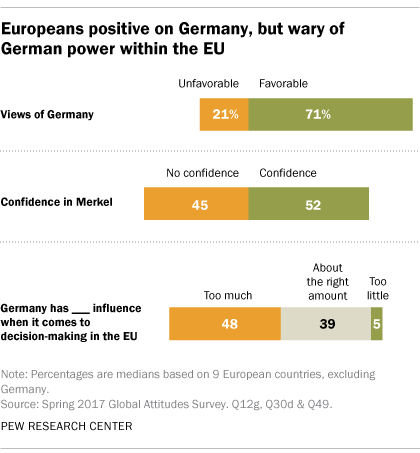 Across the European countries surveyed, Germany is overwhelmingly seen in a positive light. But there is more skepticism when it comes to the international leadership of Chancellor Angela Merkel and Berlin.

Roughly seven-in-ten Europeans outside of Germany see that country favorably and about half trust Merkel to do the right thing regarding world affairs. But a plurality of Europeans believe Germany has too much influence when it comes to decision-making in the EU. 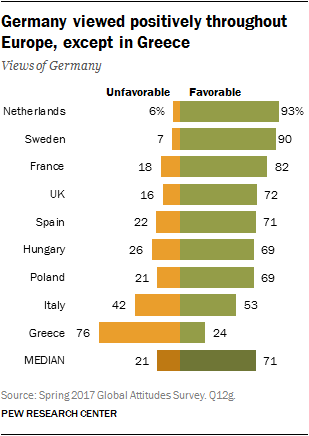 Large majorities in seven of nine EU nations surveyed view Germany favorably. The Netherlands and Sweden are home to the broadest support, with nine-in-ten or more in each nation reporting a positive view of their fellow EU member.

Italians are less partial to Germany, with only about half expressing a favorable opinion. But even in Italy – where some officials have expressed frustration with austerity plans advocated by Berlin and enforced by Brussels – views of Germany tend to be positive.

Greece is home to pronounced anti-German sentiment, however. The country is several years into an austerity program imposed by the EU and backed by Merkel’s government. About three-quarters of Greeks say they have an unfavorable view of Germany, including 43% who have a very unfavorable view. 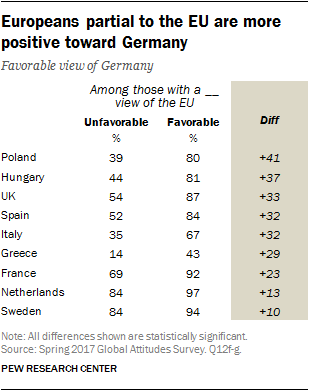 Since the global financial crisis, public attitudes toward Germany have darkened in Italy, France and Spain. Between 2007 and 2017, unfavorable views of Germany went up by 27 percentage points in Italy, 8 points in France and 7 points in Spain.

Views of Germany are closely tied to views of the EU as a whole. In each European country surveyed, those who favor the EU are more likely to express a positive opinion of Germany. In Poland, for example, those partial to the EU are 41 points more favorable toward Germany than those who dislike the EU (80% vs. 39% favorable). 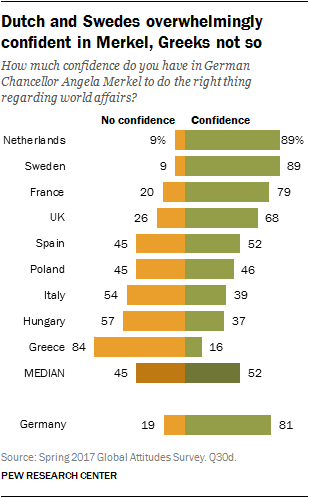 Confidence in Chancellor Angela Merkel’s handling of world affairs varies considerably across the European nations surveyed by the Pew Research Center. At one extreme, overwhelming majorities in the Netherlands, Sweden and France trust Merkel to do the right thing on the world stage. In fact, the Dutch and Swedish publics (89%) have more confidence in Merkel than do Germans (81%).

At the other end of the spectrum, Italians, Hungarians and Greeks tend to lack confidence in Merkel. Greeks are particularly skeptical of Merkel’s leadership, with over eight-in-ten saying they have no confidence she will do the right thing in world affairs.

Despite mixed reviews, overall confidence in Merkel is on the upswing in Europe. Compared with 2016, faith in Merkel has increased in eight of nine European nations. Merkel’s ratings have gone up 13 percentage points in Poland, 12 points in Spain, 9 points in the UK, 8 points in France and Hungary, and 6 points in the Netherlands, Italy and Greece.

Although Merkel is avowedly center-right in her political orientation, in a number of countries surveyed, people who identify with the political left are more partial to the German chancellor’s leadership than those on the right. In Poland, just 39% of people on the right express confidence in Merkel, compared with 63% of people on the left. A similarly large ideological gap exists in Hungary (23 percentage points) and there are smaller gaps in Italy (13 points), the UK (11 points) and the Netherlands (6 points). Even in Germany, Merkel gets higher ratings for her capacity to handle international relations from those on the left (86%) than those on the right (75%).

In France, the Netherlands, Sweden and the UK, those who express disdain for right-wing populist parties in their countries are more likely to express confidence in Merkel than those who have a favorable opinion of these parties.

Many Europeans wary of Germany’s influence in EU decisions 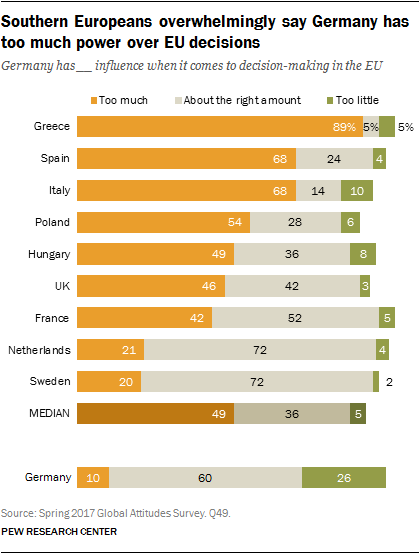 When it comes to EU decision-making, the prevailing view in five of nine European nations is that Germany has too much influence. This view is most common in Greece, Spain and Italy.

More than half in Poland and a plurality in Hungary agree that Germany plays an outsize role in EU decisions. The British are split on the issue.

Across all nine EU nations, very small shares believe that Germany should have more influence in EU decisions.

As for Germans themselves, six-in-ten say their country has about the right amount of sway in the EU. Unlike the rest of Europe, just 10% believe Germany is too influential in EU affairs, while about a quarter (26%) think their country should wield more power in decision-making than it currently does.