Among the myriad threats that Europe faces in 2016, the scourge of ISIS registers most strongly. In fact, ISIS is either tied or seen as the greatest threat in nine of the 10 European countries surveyed. But it is not the only high-profile threat felt in Europe. More than half in all European countries surveyed say global climate change is a major threat to their country, and many also cite global economic instability as a dire threat, especially in places hit hard by the euro crisis such as Greece and Spain. And many Europeans fear the threat of cyberattacks from other countries. 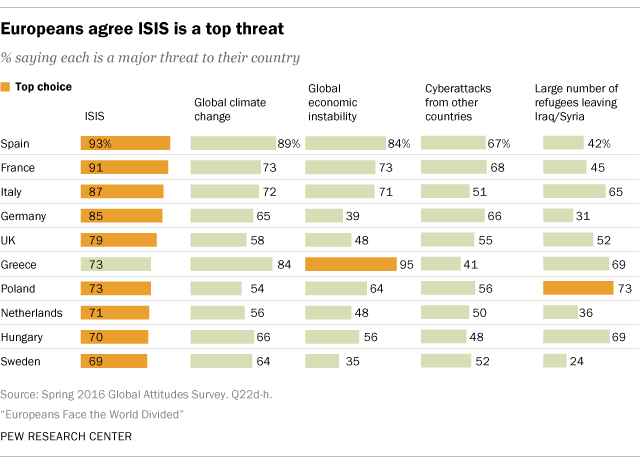 The refugee crisis also concerns many people across the European countries surveyed, but the threat assessment varies across the continent. Majorities in Poland, Hungary, Greece and Italy say that a large number of refugees leaving places like Iraq and Syria are a major threat to their countries, compared with only about a third or less of people in Germany and Sweden, both of which have taken in a disproportionately large number of migrants. Within European countries, those on the political right or who support right-wing parties are more concerned about the refugee issue.

Other threats such as tensions with Russia, China’s emergence as a world power and U.S. power and influence are perceived as less dire, though most people still perceive them as at least minor threats. But when asked to choose between the U.S. and Asia as the region that is more important to Europe, politically and economically, many Europeans choose the U.S.

(For comparison data from the U.S., see Chapter 3 of “Public Uncertain, Divided Over America’s Place in the World,” released May 5.)

Looking across the 10 European countries surveyed, a median of 76% say that the Islamic militant group in Iraq and Syria known as ISIS is a major threat to their country, with only two-in-ten saying that ISIS is either a minor threat (17%) or no threat at all (3%). Europeans arguably have reason to be wary: The past year has seen major terrorist attacks in Paris and Brussels perpetrated by ISIS or its affiliates, and the level of alert across Europe remains high.1 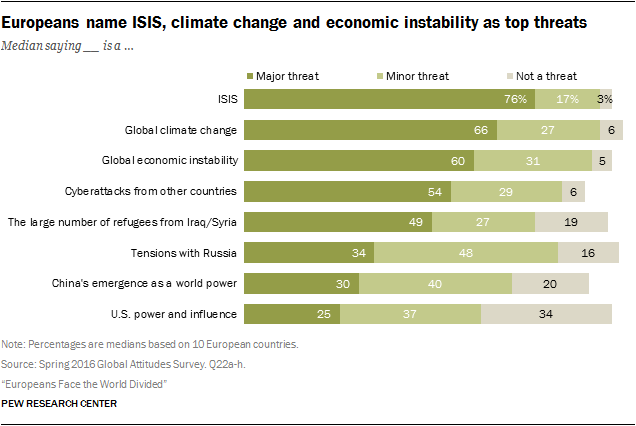 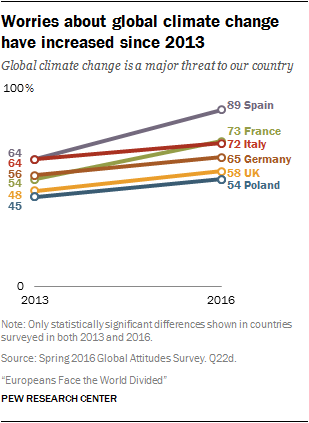 After ISIS, the greatest threat named by Europeans among the eight issues tested is climate change. Just months after the signing of a historic climate accord in Paris, a median of 66% say global climate change is a major threat. In fact, more than half in every EU country surveyed say that climate change is a chief concern.

The perceived level of threat from climate change has increased from that of 2013 in six of seven countries surveyed where trends are available. The biggest increase comes from Spain, where 89% say that climate change is a major threat, up from 64% in 2013. 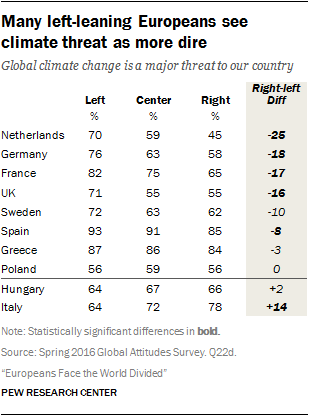 In six European countries, people on the left are more likely than those on the right to name climate change as a major threat to their country. For example, 70% of those who identify themselves as on the left of the political spectrum in the Netherlands say that global warming is a major threat to their country, compared with only 45% who say this on the political right. However, this pattern is reversed in Italy.

The threat of cyberattacks also worries many people in Europe. Half or more in eight of the 10 European countries surveyed say attacks over the internet from other countries represent a major threat.

Overall, a median of 49% across Europe say the large number of refugees leaving countries such as Iraq and Syria are a major threat. But this median masks dramatic differences within the countries surveyed. For example, in Poland and Hungary, both countries where right-leaning governments have made it a point to slow the flow of migrants to their countries, 73% and 69% respectively say the refugee issue is a major threat to them. In Poland this level of worry ties ISIS as the top threat among the eight tested.

However, in some countries relatively few people see the threat as major. This includes around a third or less in the Netherlands (36%), Germany (31%) and Sweden (24%), the latter of which has taken in an outsized number of child migrants relative to other European countries.

In the UK, roughly half (52%) say the large number of refugees leaving Iraq and Syria is a major threat to their country.

The divide on the refugee issue is not just a matter of location. Political orientation also plays a key role in the threat assessment. In eight of the 10 European countries surveyed, those on the political right are more concerned about the refugee threat than those on the political left. In France, 61% of those who put themselves on the right side of the spectrum say the refugees coming from the Middle East are a major threat, compared with only 29% on the political left. Double-digit differences between right and left are also found in the UK, the Netherlands, Italy, Germany, Greece, Spain and Sweden. 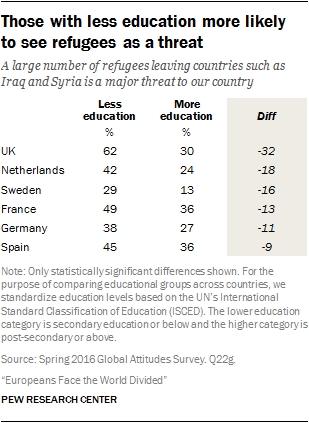 In countries where major right-wing, anti-immigrant parties exist but there are not enough data to analyze party supporters, there are still differences on the refugee issue by favorability toward those parties. For example, among those Germans with a very or somewhat favorable view of the AfD (Alternative for Germany) 63% see the movement of refugees as a major threat, compared with 26% of Germans who have an unfavorable view of AfD. Similar divisions are seen between those with favorable views of the Swedish Democrats in Sweden, the PVV in the Netherlands and the Lega Nord (LN) in Italy, and those who view these parties unfavorably.

Additionally, there is an educational split on this question. Those with a lower level of education generally are more likely to see the refugee crisis as a major threat compared with those who are more-educated. For example, in the UK, among those with only a secondary education, 62% see the refugee issue as a major threat, compared with only 30% among the more highly educated cohort (postsecondary education or more).

Russia, China and U.S. seen as less of a threat to Europeans

Overall, the threat of tensions with Russia, China’s emergence as a world power and the United States’ power and influence are seen as lesser threats to most Europeans. Medians of only around one-in-three or less of Europeans name these as major threats. But there are some noticeable exceptions.

For instance, 71% of Poles say that tensions with Russia are a major threat, a far greater percentage than any of the other countries surveyed. In the past year, there have been multiple examples of Russian aircrafts threatening NATO allies, and the expansion of U.S. missile defense in Poland (and Romania) is a major geopolitical issue. Meanwhile, many Eastern Europeans are probably still thinking about the 2014 annexation of Crimea by Russia and the continuing conflict in eastern Ukraine.

Most Europeans see U.S. as more important than Asia 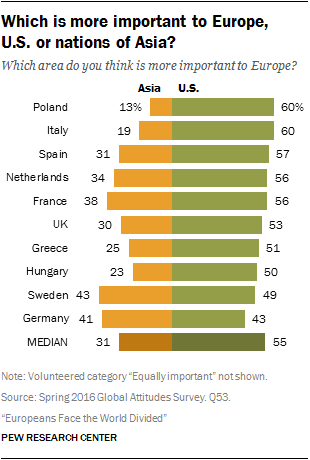 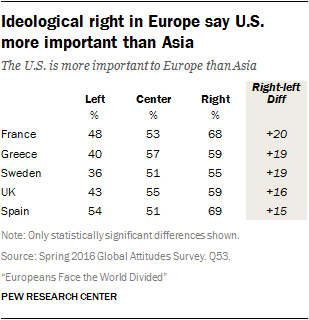 In all, half or more in eight of the 10 EU nations surveyed say the U.S. is more important than Asia. The countries most in favor of political and economic ties with the U.S. over Asia are Italy and Poland (both 60%). Notably, the only two countries that are more split on the issue are the more economically sound northern European countries of Sweden and Germany. Germany in particular is among China’s largest trading partners and HSBC declared that “over the long term, we expect Germany’s import and export bases to become more diversified geographically, with South and South East Asian countries taking an increasing share of the German market.”