Previous Pew Research Center surveys have found broad support for democratic principles in Europe, but the latest poll reveals less consensus on promoting human rights in the international arena. Among the 10 European nations surveyed, there are only four in which half or more say human rights should be a top priority for their country’s foreign policy.

Opinions about economic relations with the developing world vary as well. Most respondents want their nation’s companies to invest more in developing countries. There is also support for importing more goods from developing countries and increasing foreign aid, although opinions on these two issues vary across European publics. Overall, the desire to engage economically with the developing world is strongest in Spain, Sweden and Germany, while the Greeks, Hungarians and Italians are the most reluctant. 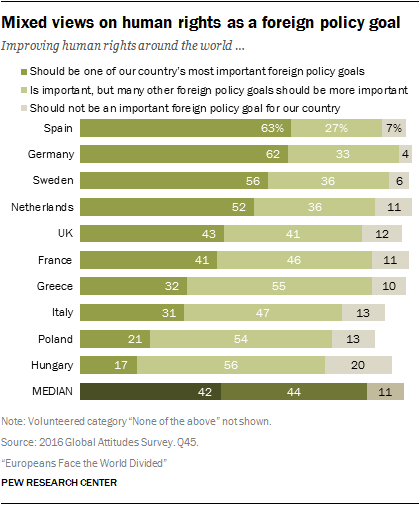 There are deep ideological divisions on this issue, with those on the political left much more likely to consider human rights a top foreign policy priority. This is especially true in the UK, where 72% of those who place themselves on the left of the ideological spectrum say improving human rights should be one of Britain’s most important foreign policy goals, compared with just 32% of those on the right. Double-digit gaps between left and right are also found in six other nations.

As one might expect given these ideological differences, there are also significant divisions along partisan lines. For example, 47% of those who identify with the French Socialist Party say human rights should be one of the country’s most important foreign policy priorities, but just 32% of Republicans and 24% of National Front supporters agree.

A median of 76% across the 10 EU nations surveyed say they support companies from their country expanding investments in developing economies. Three-quarters or more back this idea in Spain, Sweden, Germany, the UK and the Netherlands. The only nation surveyed where less than half hold this view is Greece (47%).

In seven nations, those with higher incomes are especially likely to favor greater investment in the developing world, and in seven countries the same is true of respondents with higher levels of education.

There is also considerable support in several nations for importing more goods from the developing world. Seven-in-ten or more approve of this idea in five countries (a median of 64% approve across all 10 nations). However, 65% of Greeks and 50% of Italians oppose more imports, while Hungarians are closely divided (46% favor, 48% oppose).

In seven nations, half or more favor increasing foreign aid to developing countries (a median of 53% approve across the 10 nations). Support is particularly strong in Spain (83%), while 67% of Germans and 61% of Swedes also back increased foreign assistance. However, by a 51%-45% margin, the British public opposes more aid, and solid majorities hold this view in Greece (69%) and Hungary (64%).

People with higher levels of education consistently are more likely to support increasing aid to developing nations. Younger people also often express more support, and this is particularly true in the UK, where 66% of those under age 35 endorse increased aid, compared with 49% of 35- to 49-year-olds and 32% of people 50 and older.

Similarly, those who identify with parties on the left are also more favorable toward foreign aid. For instance, while 60% of UK Labour supporters endorse higher levels of aid, just 37% of Conservatives and 19% of UKIP supporters agree.