Europeans overall appear reluctant to support the use of hard power in international affairs. There is little backing for boosting defense spending and, despite overwhelming concern about the threat posed by ISIS, many believe that relying too much on military force to defeat terrorism only creates hatred that can lead to more terrorism. 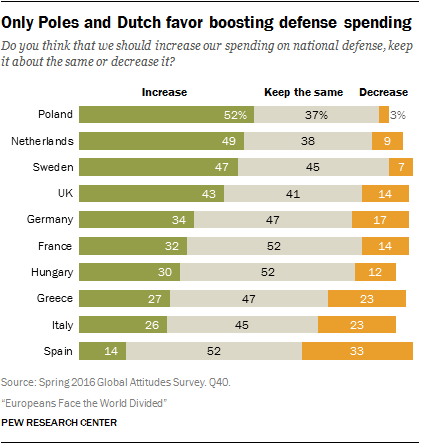 Median spending on defense is 1.2% of gross domestic product among the EU nations surveyed (the United States spends 3.3%). This outlay ranges from 0.8% in Hungary to 2.6% in Greece, but in 2015 such expenditures were down in eight of the 10 nations surveyed. Only in Poland (52%), which spends 2.2% of its GDP on the military, and the Netherlands (49%), which spends 1.2%, does roughly half the public support increasing outlays on national defense. Despite commitments by their governments to boost military spending, around half the public in France (52%) and Spain (52%) want to keep defense spending the same as it is today, as does a plurality in Germany and Greece (both 47%). A third of the public in Spain (33%) and about a quarter in Italy (23%) favors cutting military outlays. 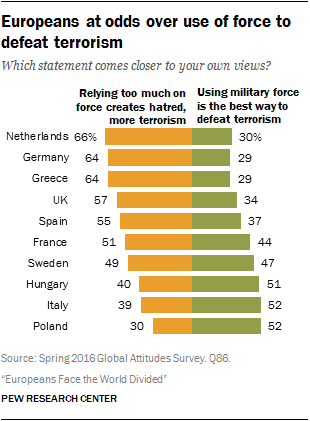 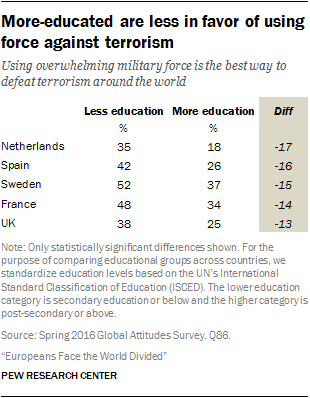 As might be expected, there is a deep ideological divide on this issue. About half or more of people on the right of the ideological spectrum in Italy, Sweden, France and Spain support exercising overpowering military might. At same time, people on the left for the most part are far more concerned than those on the right that such use of force would spawn more terrorism.