The economic downturn in Europe that followed the euro crisis raised concerns that economic stress would turn Europeans against each other, as many severe economic downturns have done throughout history, sparking xenophobia and anti-Semitism. And Europe has seen a number of hostile actions against Muslims, Jews, Roma and other minorities in recent years. But the activities of a few are not necessarily reflected in the views of the general public.

The 2015 Pew Research Center survey was conducted after the Charlie Hebdo massacre and the simultaneous attack on a Jewish grocery store, perpetrated by radical Islamists in Paris. But, in the wake of these events, there is no evidence that the atrocity sparked new public antipathy toward Muslims in any of the six European Union nations surveyed. In fact, favorability of Muslims actually improved in some nations. At the same time, French sympathy for Jews increased. 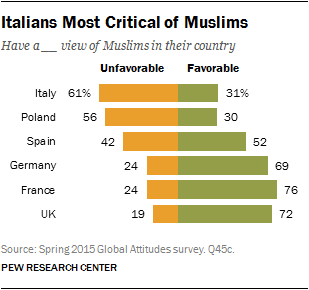 Only in Italy and Poland do negative opinions about Muslims outweigh affirmative views, by almost two-to-one: 61% to 31% in Italy and 56% to 30% in Poland. 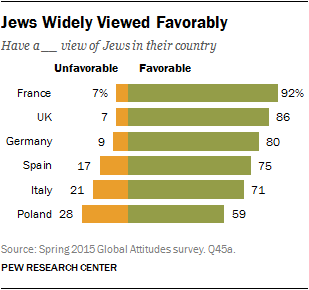 More than eight-in-ten British (86%) also voice a positive attitude toward Jews, largely unchanged in recent years. Fully 80% of Germans hold a favorable opinion of Jews, little different from views in 2014, but a marked increase from 53% who saw Jews in a positive light in 1991. Three-quarters of people in Spain see Jews favorably, as do about seven-in-ten Italians (71%) and six-in-ten Poles (59%). The Polish and Spanish points of view have not changed much in the last year.

The strongest anti-Semitic sentiment is in Poland, where 28% say they have an unfavorable opinion of Jews. 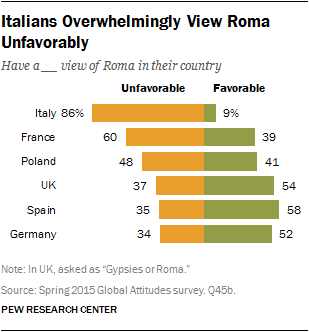 The most widespread anti-minority sentiment found in the survey was expressed against the Roma, also sometimes called Gypsies. Anti-Roma views are particularly prevalent among Italians (86% unfavorable) and the French (60%). Meanwhile, more than half in Spain (58%), the UK (54%) and Germany (52%) voice a favorable opinion of Roma. The lowest favorable ratings were in Italy (9%), France (39%) and Poland (41%).

Despite this relatively low regard for Roma compared with perceptions of other minorities, views of Roma have actually improved in the last year. The median over the six nations has grown from 38% favorable in 2014 to 47% this year, with the greatest improvement in the UK, where positive views rose by 16 percentage points.

Women have a more positive view of Roma than men do in both the UK (58% among women vs. 49% among men) and Spain (64% vs. 54%, respectively). A majority of people on the left in France (56%) are favorably disposed toward Roma, while three-quarters of French on the right hold an unfavorable opinion. Similarly, while 65% of those on the left in Britain have a positive view, nearly half (49%) on the right make a negative assessment.

Next: Chapter 4. The Rise of Nontraditional, Eurosceptic Parties
← Prev Page
Page1Page2Page3You are reading page4Page5Page6
Next Page →