The economies of member states of the European Union are showing some signs of recovery, albeit a weak one, and European publics are beginning to take notice, especially compared with their despairing views in 2013. Negative sentiment about the economy is significantly lower in some nations and positive assessments are beginning to rise in others. Nevertheless, most Europeans have yet to regain the relatively bright outlook they had about the economy in 2007, before the euro crisis. Only the Germans feel significantly better about economic conditions today than they did then, though their views have soured a bit this year.

Expectations of economic improvement over the next year are somewhat higher than in 2013. Pessimism about the immediate future is down sharply in a number of societies. However, majorities of Europeans – in some countries, overwhelming majorities – believe that today’s children will be worse off financially than their parents. 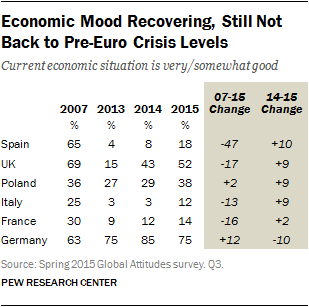 The Spanish, albeit still a small minority of them, have begun to notice the change in their economic circumstances. The proportion of the public saying the Spanish economy is either very good or somewhat good has improved from 8% in 2014 to 18% in 2015, hardly an endorsement of the current economic state of affairs but an improvement nonetheless. Those numbers are up from a low of just 4% in 2013. People on the right of the political spectrum are much more likely to see the economy as doing well as people on the left. Nevertheless, economic sentiment in 2015 bears no resemblance to the buoyant mood in 2007, when 65% of the Spanish public thought the economy was doing well.

Economic attitudes are also up 9 points in the United Kingdom, Poland and Italy, though individual national assessments of the economies differ greatly.

About half of the British (52%) now see their economy as doing well, up from just 15% in 2013. British who identify as being on the right of the ideological spectrum are much more likely than those on the left to say their economy is good, one likely reason why Prime Minister David Cameron’s Conservative government won a majority of seats in the UK’s parliamentary elections on May 7, 2015. But this revival of positive sentiment is still far below the 69% of the British who felt good about their economy in 2007.

Few Italians are upbeat about their economy: Only 12% say it is doing well, slightly better than last year. Nearly nine-in-ten Italians (88%) still think their economy is doing poorly, which should not come as much of a surprise in a country that has experienced prolonged economic contraction. Italians ages 18 to 29 are the most likely to judge their economy as doing poorly among any age group in the European countries in this year’s Pew Research survey, likely a reflection of the fact that four-in-ten young people in Italy do not have a job. And just half as many Italians have a positive view of economic conditions as in 2007.

The Germans, on the other hand, while still feeling very upbeat about economic conditions, have lost a bit of their enthusiasm. Three-quarters (75%) believe their economy is doing well, down from 85% in 2014. Men more than women think the German economy is in good shape. Nonetheless, Germans are in a much better mood about their economy than they were in 2007.

It is notable that extremely negative public assessments of European nations’ economies have subsided sharply in recent years in a number of countries. Those holding the view that their economic situation is “very bad” have fallen 35 percentage points in Spain since 2013, 23 points in the UK, 15 points in Italy and 9 points in France.

There is no ideologically consistent pattern in negative views of the economy across Europe. In France, it is people on the right who are most critical of economic conditions. It is people on the left in the UK, Spain and Italy. 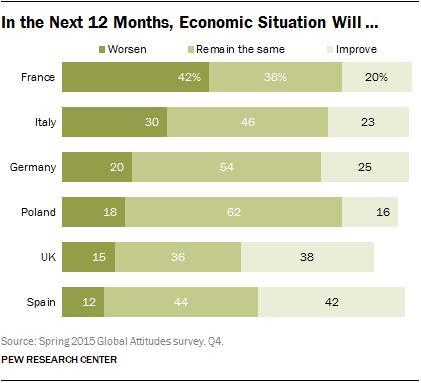 Few Europeans expect their economy to improve over the next year. In fact, many anticipate it will neither improve nor deteriorate. Three-in-five Poles (62%), more than half of Germans (54%), and a plurality of Italians (46%) say they think the economic situation in their country will remain about the same over the next 12 months. These are hardly optimistic sentiments.

The Poles (16%) are the least optimistic about their economic prospects. And 42% of the French and 30% of the Italians actually expect their economies to worsen in the coming year, as do 20% of the Germans.

Only in Spain (42%) and the UK (38%), where sentiment is split between economic optimism and the status quo, are people particularly upbeat about the future, expecting their economies to improve. Here ideology plays a role. Spaniards on the right (50%) are more likely to anticipate economic improvement than their compatriots on the left (30%). To a lesser degree, Britons on the right (43%) are more optimistic than those on the left (34%). 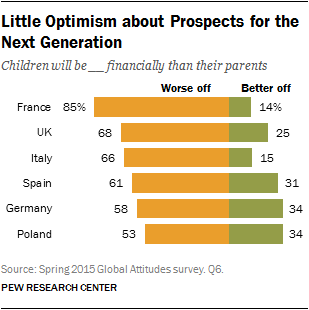 Whatever their views about current and future economic conditions, Europeans remain uniformly downbeat about prospects for the next generation. More than eight-in-ten French (85%), about two-thirds of British (68%) and Italians (66%), roughly six-in-ten Spanish (61%) and more than half of Germans (57%) and Poles (53%) hold the view that when children in their country today grow up, they will be worse off financially than their parents. Such pessimism is largely unchanged from 2014. This negativity is particularly strong among those ages 50 and older in Spain, Germany, Poland, the UK and France.

Only about a third of Poles and Germans (both 34%) believe that today’s children will be better off, as do a quarter (25%) of the British. These minority views represent an 8-point rise in optimism in Poland and the UK and a 6-point increase in Germany since 2013.

Next: Chapter 2. Support for the European Project Rebounding
← Prev Page
Page1You are reading page2Page3Page4Page5Page6
Next Page →