The euro crisis undermined public faith in both the European Union and the benefits of strengthening the European economy through economic integration, a goal first set by the 1957 Treaty of Rome creating what was then the European Economic Community. Public trust in both the Brussels-based EU and an economically integrated Europe has begun to recover in the past two years. In four of the six nations surveyed, such sentiment now exceeds that in 2013. 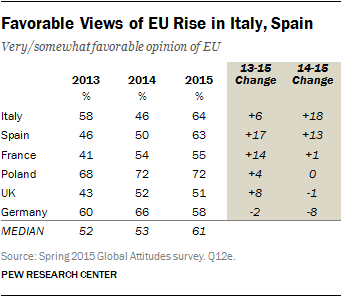 For the past three years, the Poles have had the highest regard for the EU, with 72% seeing the institution favorably in 2015, unchanged from 2014. Young Poles, those ages 18 to 29, are overwhelmingly positive about the EU, more so than Poles ages 50 and older.

More than six-in-ten Italians (64%) say they have a favorable view of the EU. This represents an 18-point improvement in such sentiment since 2014. There has been a similar 13-point rise in the favorability of the EU in Spain (50% to 63%).

Views of the EU are relatively unchanged in France (55%) and the United Kingdom (51%). But there are demographic differences within this support. Young French and British respondents to the survey are far more supportive of the EU than older ones. And the left in the UK is significantly more favorable toward the EU than the right.

German support for the EU has trailed off a bit, but about six-in-ten Germans still have a favorable view of the Brussels institution.

Mixed Views on the Value of Economic Integration

Belief that European economic integration is beneficial has never been as pervasive as favorability of the EU. But positive views of the European project continue to edge back up after the damage done to its reputation by the euro crisis. 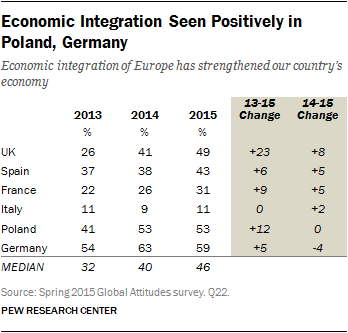 Just over half of Poles (53%) believe that their overall economy has been strengthened by the economic integration of Europe. While this is unchanged from 2014, it is up 12 points from 2013. A majority of younger Poles believe in the efficacy of closer economic ties with the rest of the EU, but less than half of Poles 50 and older agree.

Roughly half (49%) of the British say that economic integration has strengthened their economy, up 8 points from 2014 and 23 points from 2013. Men are slightly more likely to believe this than women. Young Brits are far more likely than older ones to hold this view, as are people on the left of the ideological spectrum.

French belief in the economic benefits of European integration has risen 9 points since 2013, but still only 31% say it has strengthened the French economy. However, roughly half the French ages 18 to 29 express faith in a more tightly integrated EU economy, nearly twice the support found among those ages 50 and older. And French on the left of the political spectrum are far more likely to voice the view that integration is good for the economy than their counterparts on the right.

About six-in-ten Germans (59%) hold the opinion that economic integration has been good for their country, not a surprising sentiment given the fact that Germany runs a significant trade surplus with the rest of Europe. Germans’ belief in the efficacy of economic integration is largely unchanged from last year, but up 7 percentage points from 2013. German men more than women, and people on the left more than those on the right, express support for European economic integration.

Notably, there are quite substantial differences in some nations between support for the EU and confidence in closer economic ties within Europe. Fully 63% of the Spanish give Brussels a thumbs-up, but just 43% think economic integration has worked for them. More than six-in-ten Italians (64%) favor the EU, but only one-in-ten (11%) say it has been good for their economy.

And over half (55%) the French have a favorable view of the EU, but less than a third (31%) believe European economic integration has been good for their economy. Even in Poland, where the public expresses faith in both the EU and integration, there is a 19-point difference between support for the EU (72%) and the value of closer economic ties (53%). Such views suggest people have not lost faith in the concept of a united Europe, but they do not believe it has delivered on its promise of a better life. 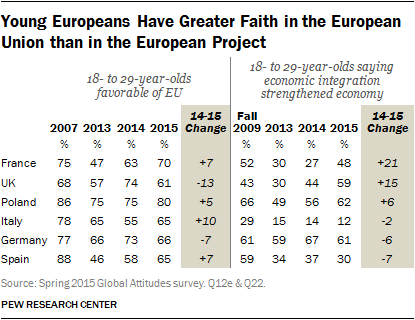 Young people ages 18 to 29 are the next generation of Europeans, and their views will shape the future of the EU and the European project. In 2013, in the wake of the euro crisis, younger Europeans’ confidence in both the European Union and in economic integration had declined sharply from previous years. Their faith in both began to recover in 2014 and in some nations has continued to improve in 2015. Nevertheless, the favorability of the EU among young people still has not returned to the level seen in 2007. And belief in the efficacy of economic integration is lower in four of the six EU nations surveyed compared with 2009.

Young Europeans’ belief that economic integration has strengthened their economy is also up in the past year in France, where it has risen 21 points to 48%, and in the UK, up 15 points to 59%. Nevertheless, such faith in the avowed economic aim of the EU is still quite low in Italy (12%) and Spain (30%) the two EU nations in the survey with the highest youth unemployment rates in 2014.

The euro was introduced as the single European currency in 1999 and is now used by 19 of the 28 member states in the European Union. 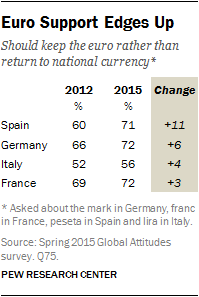 Since 2010, when the Pew Research Center first began asking about it, support for the euro has been quite robust in almost all the survey countries that use the currency. And euro backing is now stronger than ever in Germany, France and Spain. In 2015, more than seven-in-ten Germans (72%), French (72%) and Spanish (71%) want to keep using the euro and not return to using their previous national currencies: the deutsche mark, the franc and the peseta. Favorable views of the euro have also rebounded in Italy, where in 2014, for the first time, fewer than half of respondents wanted to keep the euro. Now, 56% of Italians want to keep the euro, up 11 points from last year.

The British Mood and Their Election 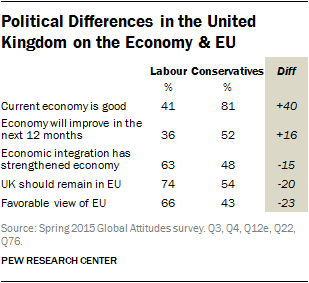 When the British went to the polls May 7, the Conservative Party scored a stunning victory. The public’s economic mood on the eve of the election helps, in part, to explain the outcome. And it highlights the challenges the Cameron government faces in dealing with Britain’s relationship with the European Union. 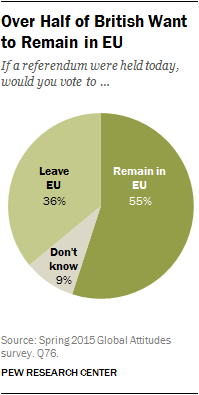 By 40 percentage points, 81% to 41%, Conservative supporters were more likely than Labour Party adherents to say that the current UK economy was in good shape in the run-up to the election.

By a 16-point margin, Conservatives were more likely than Labour followers to believe that the UK economy will improve in the next 12 months.

Now that he has been reelected, Cameron has promised a national referendum on continued UK membership in the European Union. His Conservative Party followers have their doubts about the Brussels-based institution. Fewer than half (43%) have a favorable view of the EU. Just 48% think European economic integration has strengthened the British economy.

Yet, a majority (55%) of the British public says it wants the UK to remain in the EU.