Concerns about public health are widespread in sub-Saharan Africa, and there is considerable support in the region for making public health challenges a top national priority. In particular, people want their governments to improve the quality of hospitals and other health care facilities and deal with the problem of HIV/AIDS.

A median of 76% across six countries surveyed say building and improving hospitals and other health care facilities should be one of the most important priorities for their national government. The percentage of the public who holds this view ranges from 85% in Ghana to 64% in Nigeria.

Similarly, a median of 76% believe preventing and treating HIV/AIDS should be one of government’s most important priorities, ranging from 81% in Ghana to 59% in Nigeria.

A median of at least 65% also say the other issues included on the poll — ranging from access to drinking water to increased child immunization — should be among the most important priorities. In fact, majorities hold this view about all seven issues in all six nations.

Overall, there has been little change in public health priorities in Uganda or Kenya since these questions were last asked in 2007, although in the latter nation the percentage of people saying HIV/AIDS should be one of the most important priorities for government has declined from 80% to 63%. Meanwhile, Ghanaians today are more likely to say that six of the seven tested health issues should be a central concern for government. For instance, 85% of Ghanaians say this about building and improving hospitals, compared with 62% in 2007.1 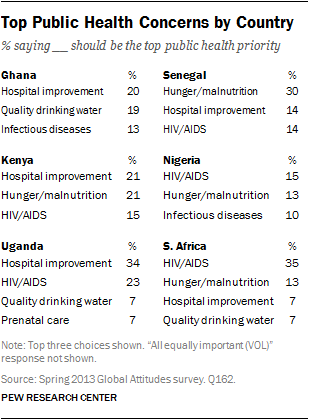 In a follow up question, respondents were asked which of these challenges they believe should be the most important public health priority for their government. On this question, responses are somewhat diffuse within each nation, and differ by country.

However, hospital and health care facility improvement is at or near the top of the list in several nations, including Uganda where roughly one-in-three (34%) consider this the number one public health concern.

Many also say HIV/AIDS should be the top priority for government, especially in South Africa and Uganda, which have the highest HIV prevalence rates among the six countries surveyed.2 Meanwhile, fighting hunger and malnutrition is the highest priority in Senegal, and is tied for the top spot in Kenya.