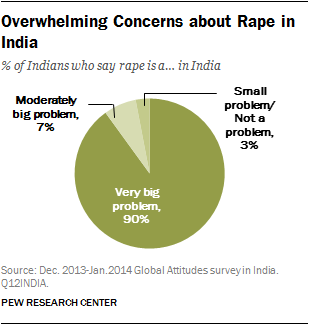 One year after the gang rape and murder of a 23-year-old student in New Delhi made national headlines, Indians remain concerned about the problem of rape in their country and the inadequacy of the criminal justice system in dealing with the issue.

A national poll conducted by the Pew Research Center between December 7, 2013, and January 12, 2014 shows that nine-in-ten Indians agree that the crime of rape is a “very big problem” in the country. Further, roughly eight-in-ten (82%) say the problem is growing. While four of the men convicted in the infamous Delhi case were given the death penalty, nearly three-in-four Indians (74%) say that the laws in the country are too lax when it comes to punishing cases of rape. About as many (78%) fault the country’s police for not being strict enough in investigating such cases.

Since the New Delhi assault, cases of rape in India continue to gain national and international attention, generating widespread concern about the safety of women both in urban and rural sectors of the country. Earlier this month, three men were given the death penalty for the August 2013 gang rape of a photojournalist in Mumbai. Another high profile assault took place in January in West Bengal, where a village council used gang rape to punish a young woman for her relationship with a man from outside her community.

In the aftermath of the Delhi case, the Indian government appointed a three member “Verma Committee” headed by Justice J.S. Verma, the former Chief Justice of the Supreme Court, to suggest amendments to the current criminal code dealing with cases of sexual assault. The committee was highly critical of the current laws and law enforcement in dealing with sexual assault, and after reviewing feedback from the general public, made several recommendations to alter the criminal code. 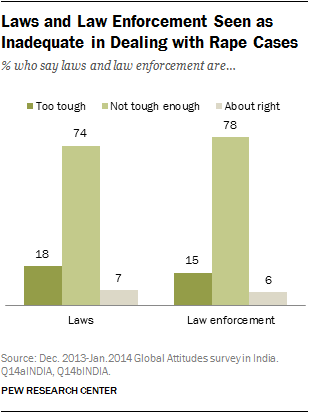 While some of the recommendations of the Verma Committee were implemented in March 2013, the public remains dissatisfied with the current laws and the police’s handling of rape cases, with roughly three-in-four saying that the current criminal code for dealing with such cases is too lax. Fewer than one-in-ten Indians rate the current laws as “about right” in dealing with cases of rape (7%). And only 6% of the public says that the police investigate these cases adequately. Meanwhile, 18% think that laws on rape are too tough, while 15% hold this view about law enforcement.

The concern about rape in the country cuts across gender lines: Roughly as many men (91%) as women (89%) say that rape is a very big issue. And in a country where city and countryside often divide on key issues, about nine-in-ten urban (89%) and rural (91%) Indians, alike, say that rape is a very big problem. Nearly as many in India’s cities and villages also think the problem is growing (83% rural; 81% urban). Concern about rape also cuts across party lines. Supporters of both the BJP and Congress Party are about as likely to fault the current laws (77% BJP supporters; 75% Congress supporters) and the police (79% BJP supporters; 80% Congress supporters) for being too lax in cases of rape.