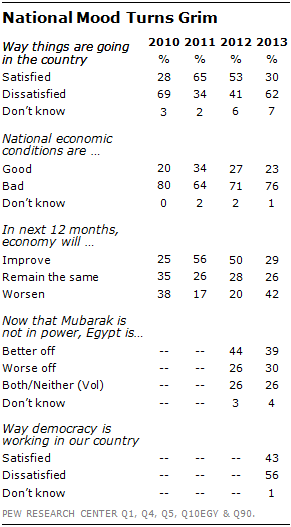 Two years after the overthrow of Hosni Mubarak, the Egyptian public mood is increasingly negative. Month after month of political uncertainty, a weak economy and often violent street protests have taken their toll, and today a majority of Egyptians are dissatisfied with the way their new democracy is working.

Only 30% of Egyptians think the country is headed in the right direction, down from 53% last year and 65% in 2011, in the days after the revolution. Roughly three-in-four say the economy is in bad shape, and optimism about the country’s economic situation has declined sharply.

In turn, just 39% of Egyptians believe things are better off now that Mubarak is out of power. Nonetheless, President Muhammad Morsi, a former Muslim Brotherhood member, receives on balance positive ratings: 53% express a favorable view of him, while 43% see him negatively.

The nation’s new constitution, approved in a controversial December 2012 referendum, is a source of division for Egyptians: 49% favor it, and 45% oppose it. The public is also divided over the fairness of the upcoming parliamentary elections, with 46% expressing confidence that the elections will be fair and 40% saying they expect them to be unfair.

There is a consensus, however, regarding the United States – overwhelmingly, Egyptians see the U.S. negatively. Despite President Barack Obama’s efforts to improve America’s image in the Arab world, beginning with his famous June 2009 Cairo speech, his ratings have slipped steadily in Egypt since he took office, and ratings for the U.S. are lower now than they were during the Bush administration. Moreover, few Egyptians place much value on a close relationship with the U.S.

Meanwhile, the new Pew Research Center poll of Egypt suggests that political divisions are growing deeper. In particular, supporters of Islamist political parties and supporters of the more secular opposition see the state of the nation and the challenges it faces very differently.

Most Egyptians believe democracy is the best form of government, and they embrace key democratic principles and institutions. For example, majorities describe having a free press and a fair judiciary as very important. But 56% are not satisfied with the way democracy is working. And while more than half continue to say that, if they had to choose, they would prioritize democracy over stability, the percentage favoring stability is on the rise.

The public is split over whether personal freedoms are getting better or worse in Egypt. And majorities or pluralities say law and order and the standard of living are in decline. 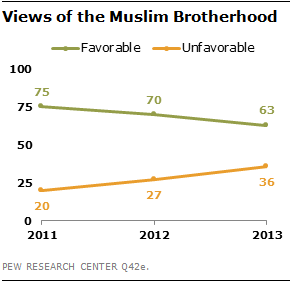 Despite the negative views about the country’s direction, most Egyptians still have a positive view of the Muslim Brotherhood, the organization that has been the dominant political force in post-Mubarak Egypt. Still, the group’s ratings have declined somewhat over the past two years – 63% give it a positive rating today, compared with 75% in 2011. About half (52%) express a favorable opinion of the Muslim Brotherhood-affiliated Freedom and Justice Party (FJP).

The National Salvation Front (NSF), a relatively secular coalition of opposition forces, receives more negative reviews. And less than half of those surveyed express a positive opinion of Hamdeen Sabahi or Mohamed ElBaradei, two of the coalition’s leaders. Ratings for ElBaradei have plummeted since 2011, when nearly six-in-ten had a positive view of the Nobel Peace Prize recipient and former head of the International Atomic Energy Agency. 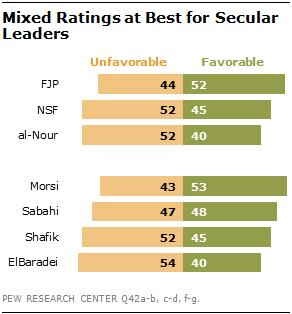 The candidate who finished second to Morsi in last June’s presidential runoff election, Ahmed Shafik, is generally viewed negatively. About half (52%) have an unfavorable opinion of Shafik, a former air force commander who served as Mubarak’s final prime minister; 45% rate him positively. Meanwhile, the Salafist al-Nour Party, which came in second in Egypt’s first parliamentary elections after the revolution, is viewed favorably by just four-in-ten Egyptians.

These are among the key findings from a nationwide survey of Egypt by the Pew Research Center. Face-to-face interviews were conducted with 1,000 adults in Egypt from March 3 to March 23. As the poll reveals, in many ways, ideological and partisan divides are growing sharper in Egypt. In particular, supporters of the opposition NSF see the state of the country quite differently from supporters of the FJP and the al-Nour Party. Those with a favorable view of the NSF are more likely to express dissatisfaction with the country’s direction, oppose the constitution, and believe the next national elections will be unfair; they are also especially likely to value democracy over stability.

Most Still Want Major Role for Islam in Politics

Islam has played an important role in Egyptian politics since the revolution, and most Egyptians continue to want a prominent role for religion in public life. About six-in-ten (58%) say the country’s laws should strictly follow the teachings of the Quran, while 28% believe laws should follow the values and principles of Islam but not strictly follow the Quran. Only 11% think the Quran should have no influence over the nation’s laws.

The view that the legal system should follow the Quran is especially common among those who have a positive view of al-Nour (84%) and the FJP (74%), although almost half (46%) of Egyptians with a favorable opinion of the more secular NSF also hold this view.

About one-quarter of Egyptians (27%) say they want religious leaders to have a large influence in political matters, while an additional 42% want them to have some influence. Roughly one-in-five (21%) say these leaders should not have much influence; just 8% believe they should have no influence at all. 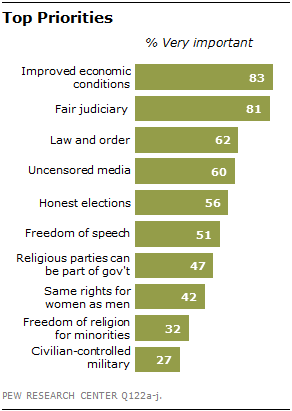 At least six-in-ten Egyptians prefer democracy to any other kind of government and believe that a democratic government, rather than a strong leader, is best suited for solving the country’s problems. Moreover, Egyptians clearly express a desire for specific democratic freedoms. Majorities consider all of the democratic rights and institutions included on the survey important, and most rate several, including a fair judicial system, free media, and honest, competitive elections as very important.

However, it is clear that in addition to democracy, the economy and public safety are top priorities. Fully 83% rate improving economic conditions as very important, and 62% believe it is very important to live in a country with law and order. 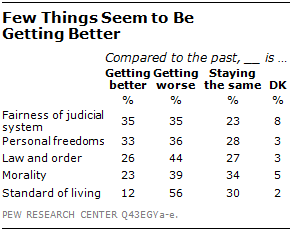 When asked about the current state of individual liberty, the judiciary, the economy, and law and order, Egyptians are not convinced things are getting better. Only about a third say the judicial system and personal freedoms are improving. Most say the nation’s standard of living is deteriorating, and a 44% plurality say law and order is declining.

Overwhelmingly negative attitudes toward America and Israel persist in Egypt. Just 16% have a favorable view of the U.S., lower than the 27% registered in 2009 shortly after President Obama took office, and lower than the 22% who expressed a positive opinion of the U.S. in 2008, President George W. Bush’s final year in the White House. 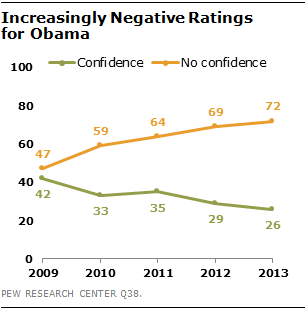 Only 26% say they have confidence that Obama will generally do the right thing in world affairs, while 72% lack confidence in the American leader. Ratings for Obama have steadily declined since 2009, when Egyptians were almost evenly divided on the newly elected American president.

The U.S. provides billions of dollars in assistance to Egypt each year, but few Egyptians believe American aid is helping their country – majorities say both U.S. economic and military aid is having a mostly negative effect on Egypt.

Overall, Egyptians do not see their country’s relationship with the U.S. as a top priority. Only 24% say it is very or somewhat important for Egypt to have good relations with America; 69% believe it is not too important or not at all important.

Meanwhile, extremely few Egyptians think a strong relationship with Israel should be a priority: just 3% say this is very or somewhat important. Additionally, most Egyptians oppose their country’s longstanding peace treaty with Israel: 63% want to annul the treaty, essentially unchanged from last year’s 61%.

Next: Chapter 1. National Conditions
← Prev Page
You are reading page1Page2Page3Page4Page5Page6Page7
Next Page →