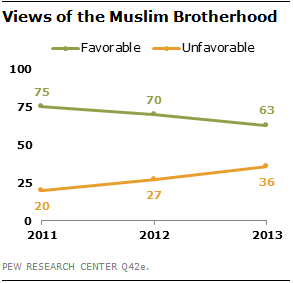 As the overall mood of the country worsens, Egyptians still have a favorable view of President Morsi and the Muslim Brotherhood, although support for the latter has weakened since 2011. And while support for religious leaders, the military and the court system remains high, fewer now see those institutions as a good influence than during the months after the 2011 revolution.

Roughly half of Egyptians (53%) have a favorable view of President Morsi, with 43% holding an unfavorable view of Egypt’s first post-revolution elected leader. This tracks closely with the 51.73% who voted for him in the presidential runoff election of June 2012. 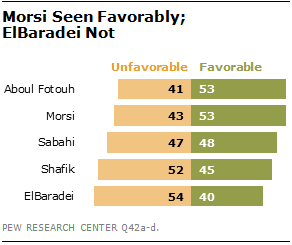 Abdel Moneim Aboul Fotouh, a former Muslim Brotherhood member who finished fourth in the election, is also seen positively by 53% of Egyptians. Presidential runner-up Ahmed Shafik and third-place finisher Hamdeen Sabahi receive generally mixed reviews, with less than half of Egyptians (45% and 48%, respectively) viewing them favorably.

Ratings for ElBaradei, a former head of the International Atomic Energy Agency, have declined since the revolution. In 2011, nearly six-in-ten (57%) had a favorable view of the Nobel Peace Prize winner. And in last year’s poll, 48% gave him favorable marks. 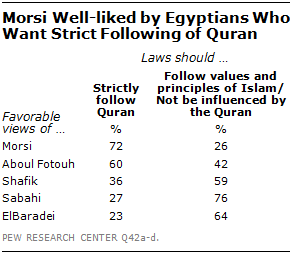 Attitudes toward leaders are shaped in part by the preferred role of Islam in politics and law. For instance, 72% of those Egyptians who say that laws should strictly follow the Quran have a favorable opinion of Morsi. In contrast, only 26% of those who say laws should only follow the values and principles of Islam or not be influenced by the Quran at all hold a positive view of the president. The same pattern holds for former Muslim Brotherhood member Aboul Fotouh.

Meanwhile, more secular leaders, such as ElBaradei, Sabahi and Shafik, get much of their support from those who express less desire for the Islamic holy book to guide the formation of laws. 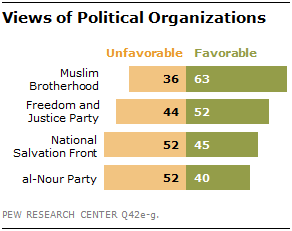 Evaluations of the secular NSF are more mixed; 45% of Egyptians have a positive opinion of the liberal coalition headed by Mohamed ElBaradei, Hamdeen Sabahi and Amr Moussa, while 52% have a negative view. The Salafist al-Nour Party is perceived negatively by the Egyptian people, with only four-in-ten expressing sympathy with the party. 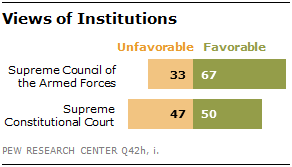 Egyptians continue to have positive feelings toward the Supreme Council of the Armed Forces (SCAF), the military body that took control of Egypt for many months after Mubarak’s ouster in 2011. In the current poll, two-thirds have a favorable view of the SCAF, with one-third expressing negative views, virtually unchanged from 2012. The Supreme Constitutional Court, which was responsible for dissolving the FJP-led parliament in 2012, receives a split verdict from the Egyptian public. Half say that they have a favorable impression of the judicial body, while 47% express an unfavorable opinion.

Influence of Groups on Egypt 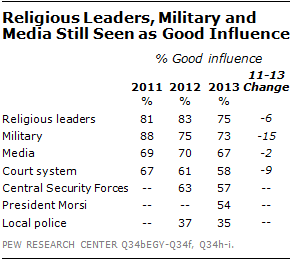 Since 2011, ratings for the military, court system, and religious leaders have fallen, although support for each institution is still high. The biggest decline is on the influence of the military. In 2011, 88% of Egyptians said the military was a good influence on the country, but by 2013 that figure has fallen 15 percentage points. Similarly, positive ratings for the court system and religious leaders have fallen nine and six percentage points, respectively.

In general, support for these institutions is similar across demographic groups. However, men give higher marks than women to the court system, Central Security Forces and the local police. In addition, people who express a favorable view of ElBaradei and the NSF are more likely to have a positive view of the media, while those who have a favorable opinion of President Morsi, the Muslim Brotherhood and the FJP tend to think religious leaders are a good influence.

Next: Chapter 3. Attitudes toward Democracy
← Prev Page
Page1Page2You are reading page3Page4Page5Page6Page7
Next Page →