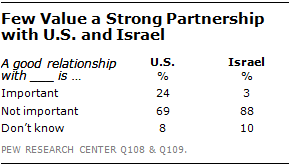 The Egyptian public is overwhelmingly negative toward the U.S. and Israel. Broad majorities hold unfavorable views of both countries, and few Egyptians say it is important to have a strong bilateral relationship with either nation. More than half of the public thinks U.S. financial assistance has a negative impact on Egypt. And roughly six-in-ten want to overturn the 1979 peace treaty with Israel. 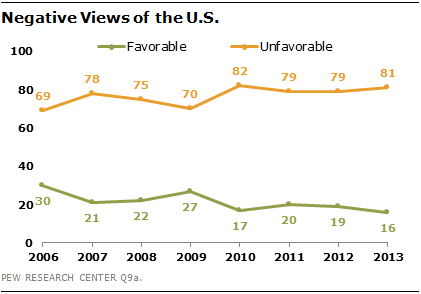 About eight-in-ten Egyptians (81%) express an unfavorable opinion about the U.S.; just 16% are favorable. While this is virtually unchanged from recent years, attitudes are more negative today than at the start of President Barack Obama’s tenure in 2009, as well as somewhat more negative than they were during much of President George W. Bush’s time in office.

President Obama fares little better among the Egyptian public. Nearly three-quarters (72%) express little or no confidence in Obama to do the right thing in world affairs; just 26% have confidence in the American leader. Egyptians’ attitudes about Obama have become increasingly negative since his first days in office in 2009, when 42% were confident in him and 47% were not.

Few in Egypt prioritize having a good relationship with the U.S. Roughly a quarter (24%) says it is important for Egypt to have a strong partnership with America, including just 9% who think it is very important. Nearly seven-in-ten (69%) say a good bilateral relationship is not too important or not at all important.

Egyptians are divided over which type of U.S. aid – military or economic – is most common. A quarter says American aid to Egypt is mostly military assistance; three-in-ten believe it is mostly aid for economic development; and a third says it is both equally. 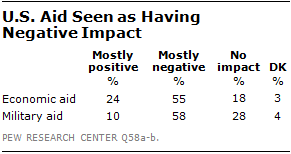 People with a favorable opinion of the NSF (31% positive impact) are more likely than those who are favorable toward the FJP (7%) or al-Nour (7%) to say that American economic aid has a positive influence on Egypt. 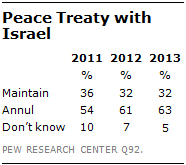 Egyptians’ attitudes about Israel are overwhelmingly negative. Roughly nine-in-ten (92%) are unfavorable toward their neighbor, including 89% who are very unfavorable. Fewer than one-in-ten (7%) hold positive views of Israel.

Similarly, very few in Egypt (3%) prioritize having a good relationship with Israel. The vast majority (88%) thinks it is not important for the two countries to be on good terms.

Roughly six-in-ten Egyptians (63%) want to annul the historic 1979 peace treaty between Egypt and Israel; 32% want to maintain it.