As economic and geopolitical competition grows between the U.S. and China, Americans and Chinese have hardened their views about each other. The desire of Americans to get tougher with China on economic relations has injected that issue into the U.S. presidential campaign. And, for China’s part, views about relations with the U.S. have become significantly more negative in the last two years.

These trends come against a backdrop where the competition is seen keenly by publics around the world. A Pew Global Attitudes survey conducted in spring, 2011 found that, in 15 of 22 nations, the balance of opinion is that China will replace the U.S. as the world’s leading superpower, or already has. 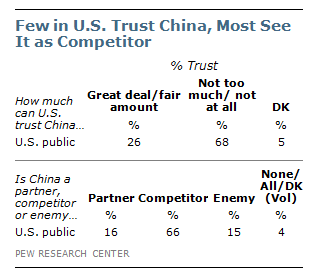 Perceptions of China’s economic power have been on the rise since 2008, and the spring 2012 Global Attitudes survey found that a median of 41% in 21 countries named China as the world’s economic leader compared with 37% who named the U.S. Americans were almost evenly divided on the question while, ironically, the Chinese public rated the U.S. as the top economic power over their own country by a 48% to 29% margin.

While nearly two-thirds of Americans (65%) in an April-May survey rated overall relations between the U.S. and China as good compared with 29% who said they were bad, that masks more negative sentiments about Chinese intentions and growing concerns about a range of economic issues.1

Asked how much the U.S. could trust China, 68% of Americans answered not too much or not at all compared with 26% who say China can be trusted a great deal or a fair amount. Republicans and independents hold that view strongly (74% and 73% respectively), and while Democratic sentiment on the question is less pronounced, it is still strong, at 61%.

As for the Chinese, their views about the U.S. have shifted substantially since 2010. The number of Chinese who regard the U.S. favorably has fallen 15 percentage points in the last two years, from 58% to 43%.2 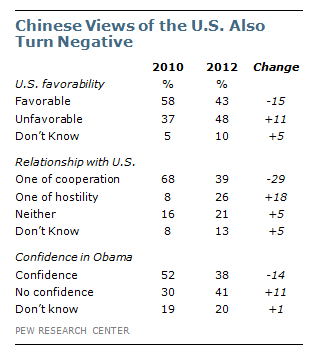 Chinese confidence in President Obama has also declined. Currently, 38% of Chinese express confidence that Obama will do the right thing in world affairs compared with 52% in 2010 and 62% in a 2009 poll conducted shortly after Obama took office. The 24-point drop since 2009 in China exceeded that of any other country which Pew had surveyed during that period.

Although the competition between U.S. and China has included military and diplomatic strategies to extend their influence, Americans are primarily concerned about the economic challenge. About six-in-ten (59%) say their biggest concern is China’s economic strength while only 28% say it is that country’s military power.

Nearly two-thirds of Americans (66%) regard China as a competitor (compared with 16% who call it a partner and 15% who say it is an enemy) and that sense of competition revolves around the economic.

The top concern of Americans — cited by 78% — is the large amount of American debt held by China. About seven-in-ten (71%) say the loss of U.S. jobs to China is a very serious problem for the U.S. and 61% say the same about the trade deficit with China. Non-economic issues such as cyber attacks from China, its military power or human rights policies are cited by 50% or less of those surveyed.

There has been a shift in the public’s priorities when it comes to economic and trade policy toward China. In March 2011, Americans saw building stronger relations with China as more important than getting tougher with it by a 53% to 40% margin; the public now says getting tougher is the priority by 49% to 42%. 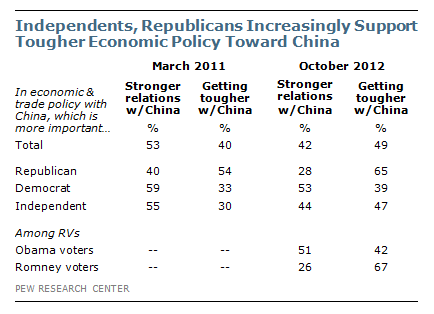 Republicans are the strongest advocates of get-tough policies with 65% of them favoring that course over building stronger relations; independents are more divided with 47% putting the priority on getting tough and 44% on better relations, but that contrasts with 2011 when they thought building stronger relations with China was more important by a 55% to 30% margin. Democrats come down on the other side, with 53% putting priority on better relations and 39% on getting tough with trade policy. That same partisan divide plays out among supports of President Obama and Mitt Romney with 51% of Obama supporters putting the emphasis on better relations and 67% of Romney backers wanting tougher policies.