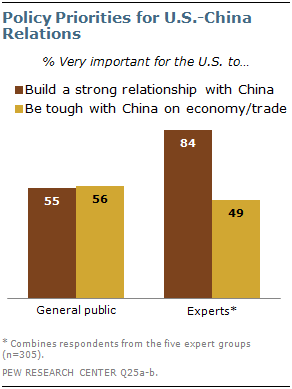 With China a key foreign policy issue in the 2012 presidential contest, and both Barack Obama and Mitt Romney promising to “get tough” with the Asian power, the American public expresses both positive and negative views about China and U.S. policy towards it.

Nearly two-thirds describe relations between the U.S. and China as good, and most consider China a competitor rather than an enemy. At the same time, majorities say the U.S. cannot trust China and that the Asian nation does not consider the interests of other countries when making foreign policy decisions. 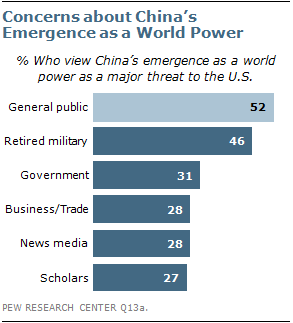 When it comes to dealing with China, as many say being tough with China on economic issues is a very important priority for the U.S. as say the same about building a strong bilateral relationship.

Despite generally positive assessments of U.S.-China relations, Americans are clearly concerned about China’s growing economic strength and its impact on the United States. Most consider the large amount of American debt held by China, the loss of U.S. jobs to China and the U.S. trade deficit with China to be very serious problems, and about half say the Asian nation’s emergence as a world power poses a major threat to America.

In contrast to the general public, American foreign affairs experts are far less concerned about China’s rising power. With the exception of retired military officers, only about three-in-ten among the experts surveyed consider China’s emergence as a world power to be a major threat. Fewer than four-in-ten experts consider the U.S. trade deficit with China to be a very serious problem, compared with about six-in-ten of the broader public; and even fewer experts express concern about the loss of U.S. jobs to China. Moreover, unlike the general public, experts are far more likely to support building a strong relationship with China than to back being tough with Beijing on economic issues.

These are among the key findings of a survey of U.S. foreign affairs experts in government, business, academia, the military and the news media and the American public conducted by the Pew Research Center’s Global Attitudes Project. The survey is part of the broader U.S.-China Security Perceptions Project, conducted in collaboration with the Carnegie Endowment for International Peace, the Kissinger Institute on China and the United States at the Woodrow Wilson International Center for Scholars, the China Strategic Culture Promotion Association and the Research Center for Contemporary China at Peking University.

The general public survey was conducted April 30-May 13, 2012, among 1,004 adults. The elite survey was conducted March 1-May 20, 2012, among 305 foreign affairs experts, including 54 government officials in the executive and legislative branches, 52 retired military officers, 74 business and trade leaders, 93 academics, think tank experts and NGO leaders, and 32 reporters, editors and commentators. Although not representative of all U.S. foreign affairs experts, the elite survey findings are indicative of attitudes among high-ranking individuals responsible for matters related to national security or foreign policy.1

Most See China as a Competitor, Say U.S. Can’t Trust It 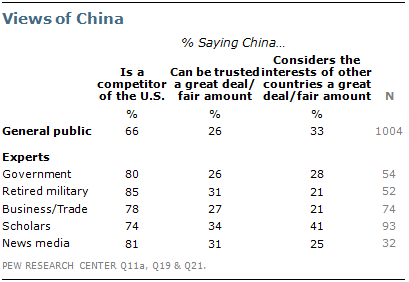 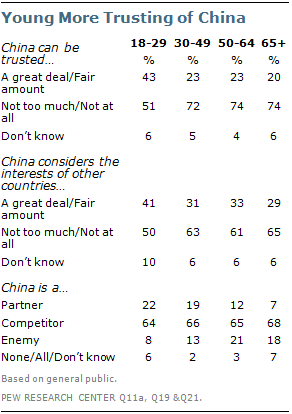 Views of China are generally more positive among young people. More than four-in-ten respondents younger than 30 see China as trustworthy (43%), compared with fewer than a quarter in older age groups. Younger people are also more likely than older respondents to say China takes the interest of other countries into account when making foreign policy decisions. And while about two-thirds across all age groups describe China as a competitor of the U.S., more 18- to 29-year-olds (22%) and 30- to 49-year-olds (19%) see China as a partner than do 50- to 64-year-olds (12%) and those 65 or older (7%).2

Nearly nine-in-ten government officials, and at least six-in-ten members of the news media, scholars, and business and trade leaders, approve of the way Obama is handling foreign policy. However, Obama receives lower marks among retired military officers, with a majority saying they disapprove of the president’s performance. 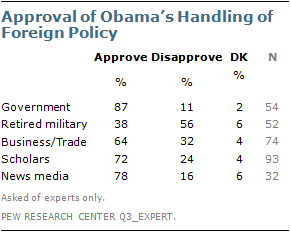 Asked to assess the Obama administration’s handling of China in particular, retired military officers also express more critical views than their counterparts. About half of retired military officers say Obama is not being tough enough with China, while 35% say his policy is about right. In contrast, majorities among the other four expert groups endorse the administration’s handling of China, including about two-thirds or more of government officials, scholars, and the news media. 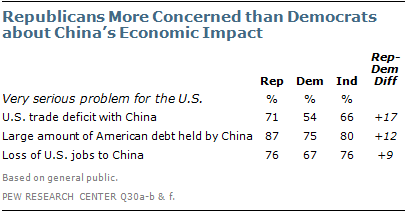 Republicans are considerably more concerned than Democrats about the impact of China’s rise. Six-in-ten Republicans believe China’s emergence as a world power poses a major threat to the U.S., compared with 48% of Democrats. Moreover, far more Republicans than Democrats see the U.S. trade deficit with China, the loss of U.S. jobs to China and the large amount of American debt held by the Asian nation as very serious problems.

Next: Foreword
← Prev Page
You are reading page1Page2Page3Page4Page5Page6Page7Page8
Next Page →