The euro crisis has hit the southern European nations surveyed (Greece, Italy and Spain) much harder than the northern (Britain, France and Germany) or eastern countries, (Poland and the Czech Republic). But it is Greece’s reputation, more than that of Italy and Spain, that has suffered the most in the eyes of the public. German Chancellor Angela Merkel receives the highest marks among leading European officials for her handling of the euro crisis, except in Greece. And Germans are among the most judgmental of Greece. The Spanish are the most critical of themselves while the Greeks are the least self-critical.

Germany is the most respected EU country among those nations surveyed. Roughly eight-in-ten people in France (84%), the Czech Republic (80%) and Poland (78%) hold a favorable view of Germany. The Greeks, however, are harshly critical of Germany. Only 21% have a positive view of Germany, while 78% have an unfavorable view. Berlin’s hard line in dealing with the euro crisis may have cost it some support among its fellow EU members. Germany’s favorability is down 10 points in Spain since 2011, down six points in France and Britain. 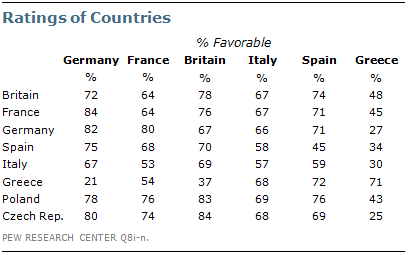 France is also held in high regard. Overwhelming majorities in Germany (80%), Poland (76%) and the Czech Republic (74%) express a positive view of France. Only the Greeks (54%) and the Italians (53%) are sparing in their praise. However, in a possible sign of intra-European tension as a result of the euro crisis, positive Italian assessment of France has fallen 20 percentage points since 2007, as has favorable sentiment toward France in the Czech Republic (-11) and Spain (-9). 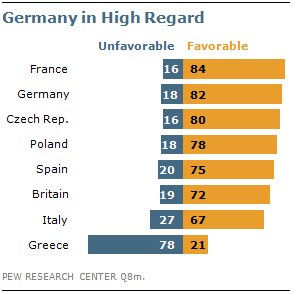 Strong majorities in seven of the eight countries surveyed have a favorable view of Britain, including 84% in the Czech Republic and 83% in Poland. And these views are largely unchanged from 2007. Only in Greece do people lack enthusiasm: just 37% of Greeks see Britain in a good light.

Spain is broadly popular. About seven-in-ten or more people in most of the countries surveyed have a favorable opinion of Spain, including 76% in Poland, 74% in Britain and 72% in Greece. The Italians (59%) evidence less enthusiasm.

Despite its recent troubles, roughly two-thirds of Europeans surveyed have a positive view of Italy, including 67% of the British, 67% of the French and 66% of the Germans. Only the Spanish, at 58%, are slightly less supportive. But in a sign that Italy’s problems may have affected other Europeans’ views of the country, the Polish assessment is down 15 points from 2010, as is the Spanish (-11), the French (-10), and the British rating (-6). Italy fares relatively poorly among its own people in opinions of the country: 57% of Italians rate their nation favorably. 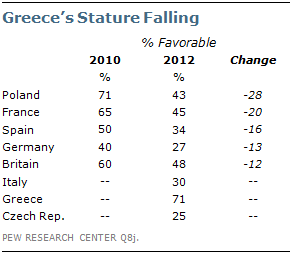 Among the major European countries, Greece is clearly the least popular. And its reputation is slipping. In no country, other than Greece itself, is there a majority with a favorable view of Greece. Only 25% of the Czech’s have a positive opinion of the Aegean nation. Polish favorable rating of Greece has fallen 28 points since 2010, Spanish ratings of Greece are down 16 points and favorability of Greece among the British has declined 12 points. Just 27% of Germans see Greece in a positive light and that is down 13 points from 2010. In France, 45% judge Greece favorably, down 20 points from 2010. Contrary to the views of other Europeans, 71% of the Greeks have a favorable view of their own country.

German Chancellor Angela Merkel is widely seen as the most effective national leader in dealing with the European economic crisis. Eight-in-ten Germans say she is doing a good job, as do about three-quarters of the French (76%) and two-thirds of the Czechs (67%), Poles (66%) and British (66%).

In Germany, Merkel is significantly more popular among older people than among the young, but in other European nations her appeal cuts across generations. Notably, there is no significant gender gap in her appeal. Her efforts are appreciated equally by men and women. In most countries, Merkel is popular across ideological lines, including support by 78% of Germans on the left. The French left is not nearly as appreciative, a difference that bears watching with a new left-of-center government in Paris. Only 54% of French respondents from the left think she is doing a good job with the crisis, 32 points lower than the approval she gets from the French right. Only in Greece (84%) does a majority think Merkel has performed poorly in the crisis. And they are harshly critical: 57% of Greeks say she has done a very bad job. 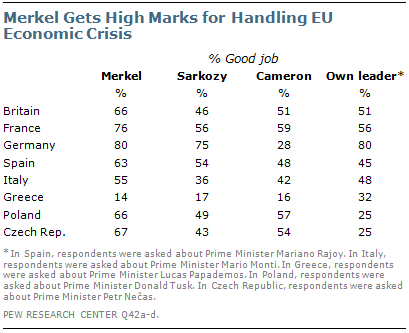 Recently ousted French president Nicholas Sarkozy might have fared better running in Germany than in France. While in the run-up to his re-election campaign, 56% of his fellow countrymen thought Sarkozy had done a good job dealing with the European economic crisis, 75% of the Germans thought he was handling the crisis well. Sarkozy may have fared less well in other European countries, lacking majority approval of his crisis performance in Poland (49%), Britain (46%), the Czech Republic (43%) and Italy (36%). But the Greeks are his toughest graders; only 17% say Sarkozy is doing a good job.

British Prime Minister David Cameron comes in for similar criticism. Only 16% of Greeks and 28 % of Germans approve of his handling of the European economic crisis. And only 51% of his own people think he is doing a good job. The French see Cameron differently; 59% approve of his performance. In a number of countries, however, Cameron’s name recognition is so low that many respondents did not voice an opinion about him. 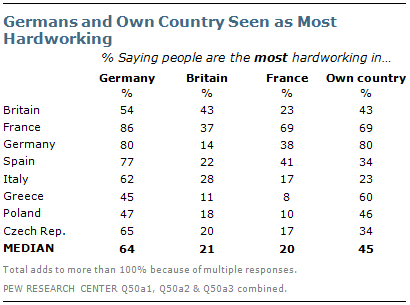 When asked to name who they think are the hardest working Europeans, the Germans are the overwhelming choice. The French (86%) hold the German work ethic in high regard, as do the Spanish (77%) and the Germans themselves (80%). Like the Germans, many respondents also give themselves high marks. The French (69%), in particular, claim to be hardworking and, to a lesser extent, so do the Poles (46%) and the British (43%). The Greeks have a similarly favorable view of their own industriousness. They are more likely to name themselves (60%) as hard workers than they are to cite the Germans (45%) or any other nationality. 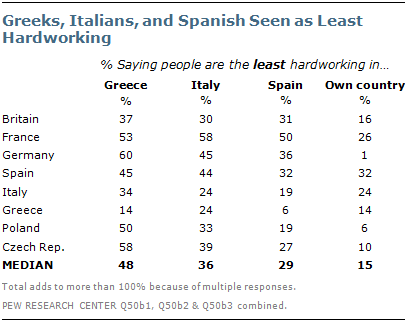 Europeans are also in agreement as to who are the least hardworking among them: it’s the southern Europeans, and especially the Greeks. The Germans (60%) are harsh judges of Greek work habits, but so are the Czechs (58%), French (53%) and the Poles (50%). The French are equally judgmental of the Italians (58%) and the Spanish (50%). And even Italians and Spanish are likely to name their own countrymen and women among the least hardworking Europeans. Greeks are not so self-critical. Only 14% call themselves lazy. Instead, they name the Italians (24%), the French (23%) and the Germans (19%) as less industrious. 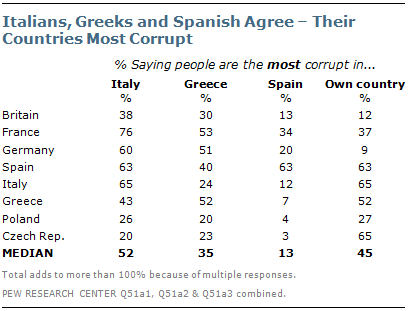 In all eight countries surveyed, the Italians and the Greeks rank in the top three mentioned as the most corrupt. But it is the Italians who come in for particular criticism. About three-quarters (76%) of the French say the Italians are dishonest, as do 63% of the Spanish and 60% of the Germans. People often also see themselves as the most corrupt, particularly in Italy (65%) and Spain (63%). The Greeks share this self-critique. About half (52%) of Greeks say that corruption is most widespread among their fellow citizens. 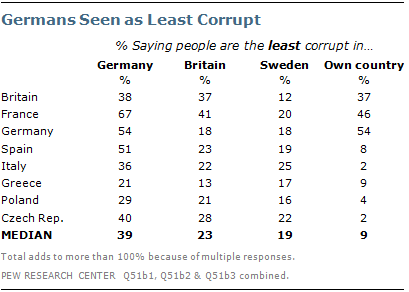 Germans are seen as the least corrupt people in the European Union, followed by the British and the Swedes. The Germans (54%) and the French (46%) have a particular high regard for their own integrity. At the same time, respondents outside of northern Europe are more self-critical. About one-in-ten or fewer people in Spain, Italy, Greece, Poland, and the Czech Republic say their countrymen and women are the least corrupt.