Austerity, bailouts and increased outside scrutiny of national budgets have been, so far, the principal policy responses to the euro crisis. These efforts receive mixed grades from European publics. They are divided over the fiscal belt-tightening to date and most question the need for further spending cuts. Richer northern European nations are skeptical about aiding EU member states in need. Poorer southern and eastern countries back such financial assistance. There is almost no support for the recently agreed upon pact giving Brussels greater oversight of national budgets. 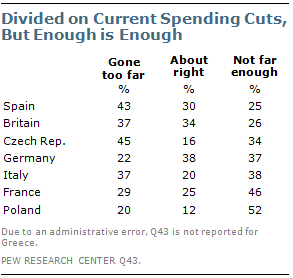 Debate over cuts in government spending have been the focal point of European politics in recent months. European citizens are divided on the efficacy of austerity. Among the nations surveyed, a median of 37% say cuts have not gone far enough, 37% say they have gone too far and 25% say they have been about right.

Roughly half in Poland (52%) and France (46%) say their country’s efforts to reduce government spending have not cut deep enough. A plurality in Spain (43%) and the Czech Republic (45%) say belt-tightening has been excessive. And Italians are divided on their government’s efforts.

These findings reflect conditions on the ground in each of these nations. In France, nominal government expenditures have increased throughout the crisis, so there have been no cutbacks in public spending. The plurality of the left in France that thinks austerity has gone too far may reflect anxiety about anticipated cuts and could help explain their support for the new French president, Francois Hollande, who has promised some increases in spending. In Spain, concern that austerity has gone too far tracks with the fact that government expenditures have gone down both in real terms and as a per cent of GDP every year since 2009. 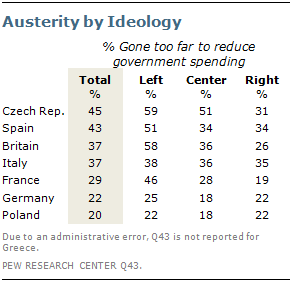 The view that spending cuts have gone too far is especially common on the left in the Czech Republic, Britain, Spain and France – all nations ruled by center-right governments at the time of the survey. But there is no real ideological divide on budget cutting in Italy, Germany and Poland.

Public support for further austerity is questionable, however. Majorities in five of the seven countries surveyed say efforts to reduce government spending are about right or have gone too far. This includes strong majorities in Spain (73%) and Britain (71%) and a lesser majority in Italy (57%). 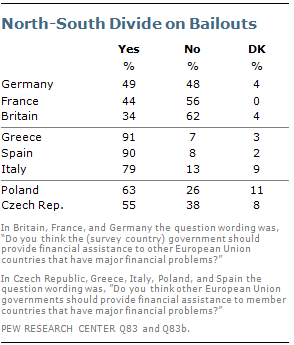 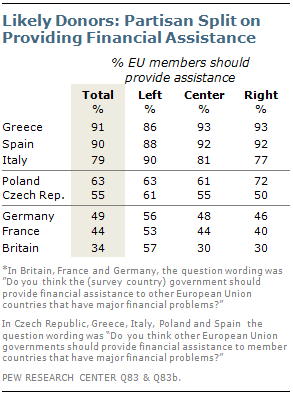 Public attitudes toward bailouts are in flux. Opinion has flip flopped in France. In 2010, 53% supported assisting others in distress. In 2012 a majority (56%) oppose such aid.

Over the same time period, German support for such assistance actually rose from 42% in 2010 to 49% today. This may reflect the fact that Germans are feeling much better about their own economy. And those who feel good about the German economy are much more likely to be willing to provide financial assistance to other European Union countries in distress than are Germans who think their economy is doing poorly. 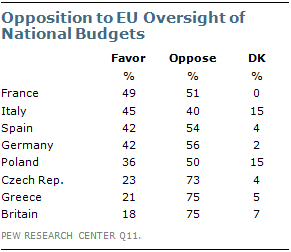 As might be expected, people in southern European countries that are recipients or potential beneficiaries of aid – Greece (91%), Spain (90%), and Italy (79%) – overwhelmingly favor other European Union governments providing financial assistance to EU member countries that experience major financial problems.

It is notable, however, that eastern Europeans, who are currently not considered candidates for bailouts – Poland (63%) and the Czech Republic (55%) – also back such aid. These nations were the beneficiaries of considerable assistance when they first joined the EU. 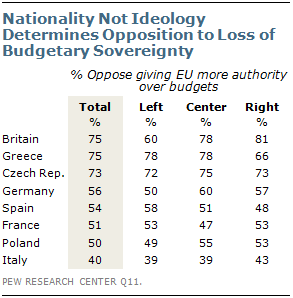 Clear majorities in four of the eight EU nations surveyed oppose giving the European Union more authority over the national budgets of member countries. Such budgetary deferral to Brussels is a key element in the European Union Treaty on Stability, Coordination and Governance in the Economic and Monetary Union – known as the Fiscal Pact – that comes into force January 1, 2013. Opposition to the loss of sovereignty over the domestic budget is found in Germany (56%) and Spain (54%) and is overwhelming in Britain (75%) and the Czech Republic (73%), where the governments have refused to sign the Fiscal Pact. (Their participation is not needed for the treaty to come into force.) Opinions are roughly divided in France (51% oppose, 49% favor) and Italy (40% oppose, 45% favor).

There is no clear-cut, European-wide ideological split over budgetary sovereignty. It is the right in Britain (81%) who most strongly oppose EU oversight of the national budget. But it is the left who oppose such supervision in Spain.

Next: Chapter 4. Views of EU Countries and Leaders
← Prev Page
Page1Page2Page3You are reading page4Page5Page6
Next Page →