Assessment of the EU as an institution, while generally positive, has fallen, especially in eastern and southern Europe. Many are critical of the European Central Bank. And in none of the euro area countries surveyed does a majority think the common currency has been good for their nation. Moreover, nations that have yet to adopt the euro are very glad they have waited. Nevertheless, there is no support in the euro zone for going back to national currencies. In general, support for the European project tends to be stronger among those with a college education.

Most Say Economic Integration Has Weakened the Economy 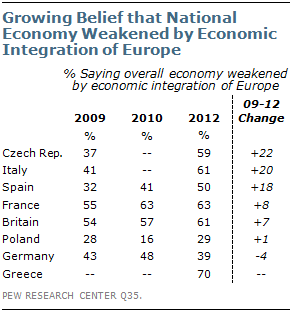 Creation of an integrated European market that would create a cornucopia of benefits for consumers and businesses has long been a European goal. But today, majorities in five of eight countries surveyed think that such economic integration has actually weakened their nation’s economy. This negative assessment is particularly strong in Greece (70%), France (63%), Italy (61%) and Britain (61%). In addition, the Spanish are divided on the issue. Germany is now the only society where a healthy majority (59%) think integration has actually bolstered their economy.

Women in Germany, Spain and the Czech Republic are more likely than men to say integration has been bad for the local economy. Moreover, concern about the impact of creating a single European market breaks sharply along educational lines. By a large margin, less educated people in France, Germany, Spain and the Czech Republic say integration has weakened their economy. Better educated people say it has boosted the economy.

In Spain, where roughly half the younger population is jobless, it is people 18 to 29 years old who are more likely than people 30 years of age and older to say business and commercial integration with the EU has worsened the economy. In the Czech Republic, it is older people who hold such critical views.

Since 2009, such negative sentiment has increased in five of the seven countries where there is comparable data, especially in the Czech Republic (up 22 points), Italy (up 20 points) and Spain (up 18 points). 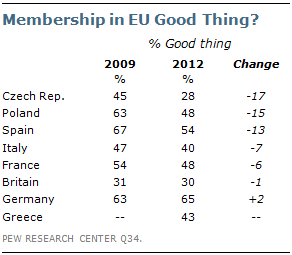 Doubts about European integration have led many Europeans to second guess their own country’s EU membership. By far, Germans (65%) are the most likely to say membership is a good thing for their country. Only about half hold that view in Spain (54%), France (48%), and Poland (48%), and in Greece just 43% still say membership is positive. The British are almost equally divided. A plurality of the Czechs say the EU has been neither a good nor a bad thing for their country. Since 2009, positive sentiment about EU membership is down 17 points in the Czech Republic, 15 points in Poland and 13 points in Spain. People with a college education are most likely to see participation in the EU in a favorable light. 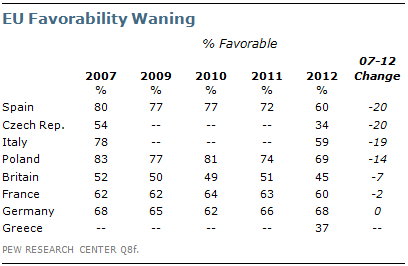 Second thoughts about economic integration and EU membership have also eroded the stature of the European Union, the symbolic institutional representation of the European project. The Brussels-based institution still maintains majority support in five of the eight European countries surveyed. The most favorably disposed are the Poles (69%) and the Germans (68%). But just 34% of the Czechs, 37% of the Greeks and 45% of the British have a favorable impression of the EU.

EU favorability is down almost everywhere from 2007, before the euro crisis began, having fallen 20 points in the Czech Republic and Spain, 19 points in Italy and 14 points in Poland. Those with a college education tend to favor the EU more than those who have no college degree.

Thumbs Down on the European Central Bank 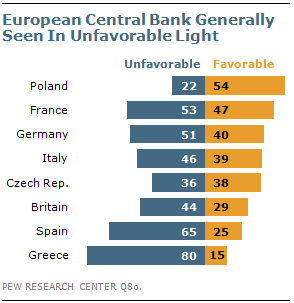 Half or more of the populations in four of the five euro area countries surveyed have a negative view of the European Central Bank, including 80% of the Greeks, 65% of the Spanish, 53% of the French and 51% of the Germans. Among non-euro area nations, 54% of the Poles actually have a positive opinion of the ECB, the only people in the survey to hold such views. The Czechs are divided. And a plurality (44%) of the British have an unfavorable opinion of the Frankfurt-based institution.

Ambivalence About the Euro 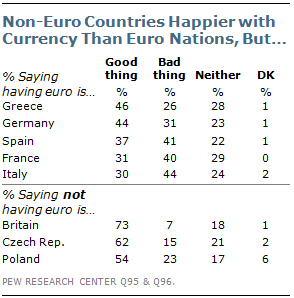 Doubt about the European Central Bank is mirrored by ambivalence about the euro, the common currency of 17 European nations. In no country among the five euro area nations surveyed is there a majority who thinks that the currency has been good for them. In two, Greece (46%) and Germany (44%), a plurality still believe having the euro has been positive for their country. However, in Italy (44%) and France (40%), a plurality of the population now actually thinks the euro has been a bad thing. Men are more likely than women to say the euro has been a good thing, as are people with a college education.

There is no ambivalence about the euro among populations that do not currently use it as their currency. Solid majorities in Britain (73%) and the Czech Republic (62%) say not having the euro has proven beneficial for their country, as do 54% of Poles. 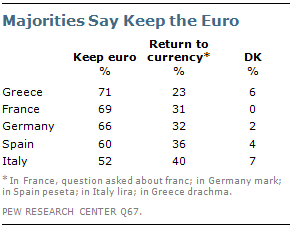 Nevertheless, there is no appetite for abandoning the euro and returning to previous national currencies in any of the euro area countries surveyed. Strong majorities in Greece (71%), France (69%) and Germany (66%) want to keep the common currency. Even in Spain, where support for the euro has fallen nine percentage points since 2009, 60% of the population still stands behind the currency. And roughly half of Italians (52%) are similarly committed to it.

Less than a quarter of the Greeks (23%) want to return to using the drachma. And about a third of the French (31%) pine to revive the franc. Similarly, only about a third of the Germans (32%) call for a reissuing of the mark. The college educated are consistently more supportive of the euro, except in Greece. Notably, it is older people in Spain and France who are especially supportive of the single currency.

Next: Chapter 3. Taming the Crisis
← Prev Page
Page1Page2You are reading page3Page4Page5Page6
Next Page →

European Unity on the Rocks Chapter 1. National Conditions and Economic Ratings
Chapter 2. Views of European Unity
Most Say Economic Integration Has Weakened the EconomyQuestioning EU MembershipErosion of EU SupportThumbs Down on the European Central BankAmbivalence About the EuroBut Keep It!
Chapter 3. Taming the Crisis Chapter 4. Views of EU Countries and Leaders Survey Methods