On the eve of the first presidential election of the post-Mubarak era, Egyptians remain hopeful about the future of their country, and they strongly desire both an improved economy and the democratic freedoms they were denied under the previous regime.

A recent survey by the Pew Research Center’s Global Attitudes Project found that 52% of Egyptians are optimistic about the future, while just 18% are pessimistic. And 53% are satisfied with the direction of the country, down slightly from 65% in a 2011 poll conducted shortly after the fall of Mubarak, but still considerably higher than the 28% registered in 2010, during the final year of the autocrat’s three decades in power. 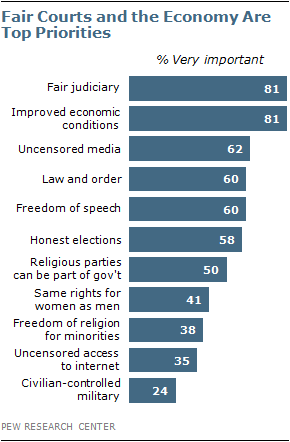 As Egyptians head to the polls, the economy is their biggest concern, according to the Pew survey conducted March 19 to April 10. Roughly eight-in-ten (81%) consider improving the economy a very important priority for the country. Only 27% describe the current economic situation as good. And regardless of which candidate wins the presidency, he will face high economic expectations – 50% think the economy will improve in the next 12 months; just 20% say it will get worse.

While growing the economy is clearly a top priority for Egyptians, so is democracy. In fact, when asked which is more important, a strong economy or a good democracy, the public is divided: 49% say the former and 48% the latter.

And despite a tumultuous and often difficult year, support for democracy has not ebbed. Two-in-three Egyptians (67%) believe democracy is the best form of government, basically unchanged from 71% in 2011.

Meanwhile, civilian control of the military is considered a relatively low priority, as just 24% think this is very important. Overall, the military continues to receive positive marks. Three-in-four say it is having a good influence on the country and 63% express a favorable view of the Supreme Council of the Armed Forces (SCAF), which has led the country throughout the transition period. And while ratings for SCAF Chairman Mohamed Tantawi have fallen from last year’s sky-high 90%, he is still viewed favorably by 63% of Egyptians.