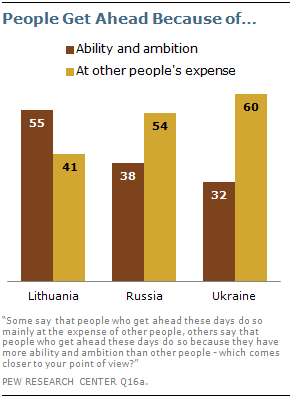 Twenty years after their country began the transition from state-directed collectivism to a free-market-capitalist approach, Lithuanians place greater stock in individual achievement and responsibility than do publics in Russia or Ukraine. While majorities in these countries believe people get ahead at other people’s expense, Lithuanians tend to attribute success to ability and ambition.

Moreover, most Lithuanians blame individual failure on personal shortcomings, while Ukrainians and Russians are more divided on whether to blame society or the individual. However, there is overwhelming agreement across these three former Soviet republics that the state should play an active role in society so that nobody is in need. 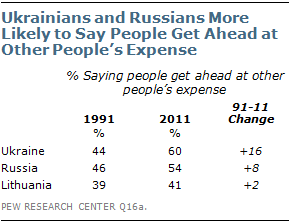 A majority of Lithuanians (55%) believe that people who get ahead these days do so because they have more ability and ambition than other people, while 41% say people who get ahead do so mainly at the expense of others. In contrast, fewer than four-in-ten in Russia (38%) and Ukraine (32%) say people succeed because of their own ability.

Ukrainians and Russians are more likely than they were two decades ago to say that people get ahead at other people’s expense. This is especially the case in Ukraine, where 44% shared this view in 1991. The change has been more modest in Russia; 46% said that people got ahead at the expense of others in 1991. Opinions in Lithuania have remained generally steady since the early 1990’s. 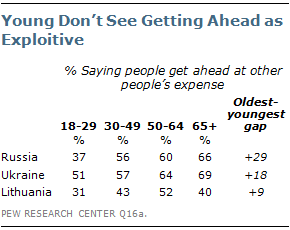 Younger people, who grew up in post-communist societies, are less likely than older generations to say that people who get ahead do so at the expense of others; rather, young people tend to credit ability and ambition. For example, just 37% of Russians younger than 30 believe that people get ahead at the expense of others, compared with majorities of those ages 30 to 49 (56%), 50 to 65 (60%) and ages 65 or older (66%). A similar pattern is evident in Ukraine, but not as clear among Lithuanians. 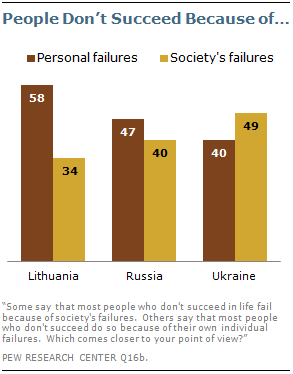 Nearly six-in-ten (58%) in Lithuania say that people who don’t succeed in life fail as the result of their own shortcomings, while only about a third (34%) blame society at large. A plurality (47%) in Russia also points to personal shortcomings, but only somewhat fewer (40%) say society is to blame for individual failures.

Ukrainians, however, have the opposite view, with only 40% saying that people who don’t succeed do so because of their own personal failures; about half (49%) say that people who don’t succeed in life fail because of society’s faults. In all three countries, views on what is to blame for one’s lack of success have remained stable since the question was last asked in 1991.

For the most part, views on personal failure do not vary considerably across demographic groups. In Russia, however, those who are 65 or older tend to place more blame on society than do those in younger generations. This gap is particularly notable between the older generation and those who are younger than 30. Half of Russians ages 65 or older say people who don’t succeed have society to blame, while 30% say personal shortcomings are responsible for individual failure; among the younger group, 55% blame individuals themselves, while 36% hold society responsible.

Role of the State 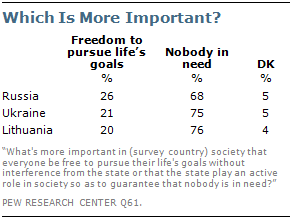 When asked which is more important, “that everyone be free to pursue their life’s goals without interference from the state” or “that the state play an active role in society so as to guarantee that nobody is in need,” overwhelming majorities in all three countries favor a stronger role for the state. At least two-thirds of Russians (68%), Ukrainians (75%), and Lithuanians (76%) prefer that the state ensures that nobody is in need within their society. Few in each country prioritize freedom to pursue life’s goals without interference.

Opinions in these three former Soviet republics are consistent with those of other Eastern and Western European publics. In a 2009 survey, opinions from the rest of Europe generally conformed to this pattern. Majorities or pluralities in all European countries in fall 2009 said that it is more important that the state ensure that no one is in need. (For more information on European views on this issue, see “ End of Communism Cheered but Now with More Reservations ,” released November 2, 2009.) 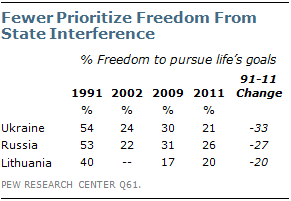 People in the three former Soviet republics surveyed now consider freedom from state interference much less of a priority than they did 20 years ago. The steepest decline has occurred in Ukraine, where the percentage saying that they should be able to pursue life’s goals unhindered has dropped by 33 percentage points, from 54% in 1991. Comparable declines have also occurred in Russia (-27 percentage points) and Lithuania (-20 percentage points).

In the three countries, those younger than 30 are about twice as likely as those ages 65 and older to prefer a society where everyone is free to pursue life’s goals; still, solid majorities across all age groups say ensuring nobody is in need should be the state’s priority.

Confidence in Democracy and Capitalism Wanes in Former Soviet Union Chapter 1. Views of Democracy Chapter 2. Views of Economic Changes and National Conditions Chapter 3. Evaluating Societal Change Chapter 4. Ratings of Countries and Organizations Chapter 5. Nationalism in Russia
Chapter 6. Individualism and the Role of the State
Reasons for SuccessReasons for FailureRole of the State
Survey Methods