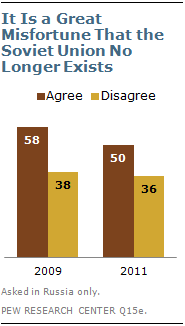 Nationalist sentiments remain widespread in Russia, in some ways even more so than when the Soviet Union was collapsing in 1991. Half of Russians say it is a great misfortune that the Soviet Union no longer exists. Moreover, as compared with 1991, a larger percentage now says it is natural for Russia to have an empire and, as a fall 2009 survey shows, more than twice as many believe there are parts of neighboring countries that belong to Russia and that Russia should be for Russians. 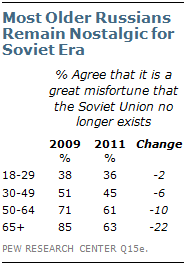 Russians remain largely nostalgic for the Soviet era, although this sentiment has abated somewhat over the past two years. Half of Russians now agree that it is a great misfortune that the Soviet Union no longer exists, while 36% disagree; in 2009, nearly six-in-ten (58%) lamented the disintegration of the Soviet Union, while 38% did not share this view.

The drop in the percentage expressing regret about the demise of the Soviet Union has been especially notable among older Russians, although most in these groups remain nostalgic.

Nationalism on the Rise 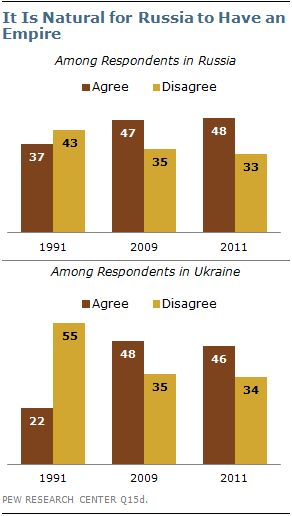 Similarly, the 2009 survey found that Russians were far more likely than they were two decades ago to agree that “there are parts of neighboring countries that really belong to us;” about six-in-ten (58%) said this was the case two years ago, compared with just 22% in 1991. Moreover, about twice as many Russians agreed that Russia should be for Russians in 2009 as did so in 1991 (54% vs. 26%). 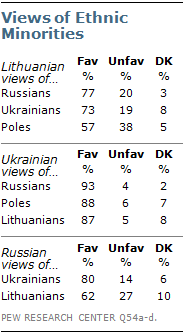 As was the case two decades ago, publics in the three former Soviet republics surveyed hold favorable views of some key ethnic minorities in their countries. That is especially the case in Ukraine, where about nine-in-ten express positive opinions of Russians (93%), Poles (88%) and Lithuanians (87%).

At least seven-in-ten Lithuanians have favorable views of Russians (77%) and Ukrainians (73%); a narrower majority (57%) expresses similar views of Poles. And in Russia, 80% give ethnic Ukrainians positive marks, while 62% say the same about Lithuanians in their country.

Next: Chapter 6. Individualism and the Role of the State
← Prev Page
Page1Page2Page3Page4Page5You are reading page6Page7Page8
Next Page →