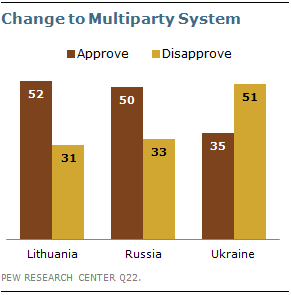 Two decades after the dissolution of the Soviet Union, publics in Russia, Ukraine and Lithuania are far less enthusiastic about the political changes in their countries. In Lithuania and Russia, more still approve than disapprove of the switch to a multiparty system, but the level of support trails the level seen in 1991, when solid majorities approved of the changes; in Ukraine, about half now say they disapprove.

Assessments of the current state of democracy are overwhelmingly negative, with majorities in the three former Soviet republics surveyed saying they are dissatisfied with the way democracy is working in their country. This discontent stems at least in part from a perception that elected officials do not care what they think and that the state is not run for the benefit of all people, as indicated in a Pew Global Attitudes fall 2009 survey.

Moreover, few in Russia, Ukraine and Lithuania believe key principles and institutions of democracy, such as a fair judiciary, honest multiparty elections, freedom of the press, free speech and civilian control of the military describe their country very well, although many place high value on these elements of democracy.

When asked whether a democratic government or a strong leader can best solve their country’s problems, most Russians and Ukrainians prioritize strong leadership, while more in Lithuania choose democracy. Given the choice between a good democracy and a strong economy, however, solid majorities in all three countries opt for economic prosperity.

Less Support for a Multiparty System 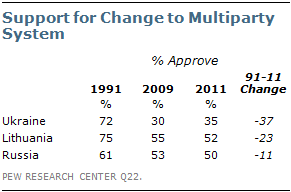 Enthusiasm for the switch from one-party to multiparty systems has waned considerably since the dissolution of the Soviet Union. Currently, about half in Lithuania (52%) and Russia (50%) and just 35% in Ukraine approve of the changes; in 1991, solid majorities in these three former Soviet republics endorsed efforts to establish a multiparty system (75% in Lithuania, 72% in Ukraine and 61% in Russia).

By comparison, the 2009 survey found that support for a multiparty system among other Eastern Europeans remained high 20 years after the fall of the Berlin Wall. In particular, at least seven-in-ten in the former East Germany (85%), Czech Republic (80%), Slovakia (71%) and Poland (70%) expressed approval of the changes, virtually unchanged from 1991. 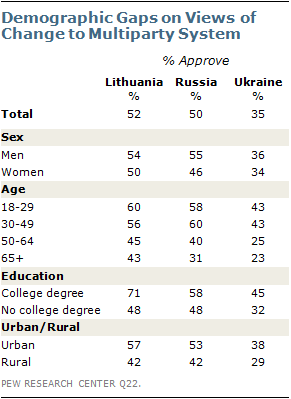 As was the case 20 years ago, support for the change to a multiparty democracy is more prevalent among younger respondents, the well-educated and urban dwellers; in Russia, gender differences are also evident, with more men than women expressing support for democracy (55% vs. 46%).

And while fewer than half across age groups in Ukraine approve of the switch to a multiparty democracy, opinions are more positive among those younger than 50 (43% approve) than among older Ukrainians (25% of those ages 50 to 64 and 23% of those 65 or older approve).

In all three of the former Soviet republics surveyed, college graduates are far more likely than those with less education to approve of the changes in their countries. This gap is especially pronounced in Lithuania, where 71% of those who have graduated from college support the change to a multiparty system, compared with just 48% of those who do not have a college degree. Smaller but considerable differences are also present in Ukraine and Russia (13 percentage points and 10 percentage points, respectively).

In Lithuania (57%) and Russia (53%), more than half of urban dwellers endorse efforts to establish a multiparty system in their countries; 42% of those living in rural areas in each of these countries share this view. In Ukraine, more in both groups disapprove than approve of the change, but support is more common among those in urban areas (38%) than among the rural population (29%). 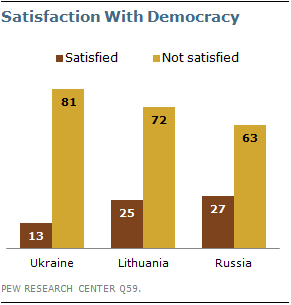 When asked to assess the current state of democracy, few in the former Soviet republics surveyed say they are satisfied with the way it is working in their country. In Ukraine, just 13% offer a positive assessment, while 81% are dissatisfied with the way democracy is working. About a quarter in Russia (27%) and Lithuania (25%) are satisfied, while 63% and 72%, respectively, express discontent.

Compared with two years ago, when negative views of democracy were already widespread, even fewer now say they are satisfied with the way democracy is working in their country. For example, in Lithuania, the percentage expressing satisfaction has declined by 10 percentage points, from 35% in 2009. 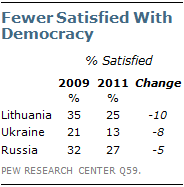 Discontent with the way democracy is working reflects, at least in part, feelings of low political efficacy. In 2009, about a quarter of Russians (26%) and Ukrainians (23%), and even fewer Lithuanians (15%), agreed with the statement “most elected officials care what people like me think.” Moreover, few believed that, generally, the state is run for the benefit of all people; 37% in Russia, 23% in Lithuania and 20% in Ukraine said this was the case in 2009. 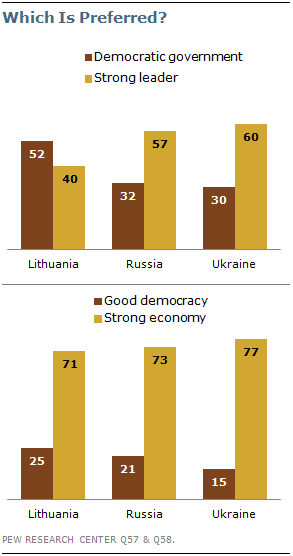 Support for democracy over a strong leader is more common in Lithuania, where a slim majority (52%) says a democratic government is preferable. Still, a sizeable minority (40%) of Lithuanians say their country should rely on a strong leader.

Confidence in democracy has waned considerably in these three countries over the past two decades. In 1991, about eight-in-ten Lithuanians (79%), 57% of Ukrainians and 51% of Russians said a democratic government, rather than a strong leader, could best solve their country’s problems.

When asked to choose between a good democracy and a strong economy, at least seven-in-ten in each of the three countries say a strong economy is more important; 77% in Ukraine, 73% in Russia and 71% in Lithuania prioritize economic prosperity. 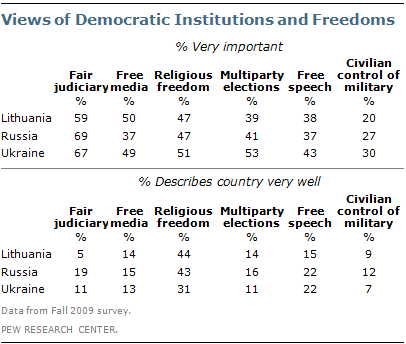 While Lithuanians, Russians and Ukrainians express discontent with the way democracy is working in their countries, the 2009 survey suggests that dissatisfaction reflects frustration about the lack of democratic institutions and freedoms rather than a repudiation of democratic values.

In that survey, majorities in Lithuania, Russia and Ukraine said it was important to live in a country with a fair judiciary, honest multiparty elections, freedom of the press, freedom of religion, free speech and civilian control of the military; and many believed it was very important to live in a country where these key features of democracy were present.

However, fewer than a quarter of Lithuanians, Russians and Ukrainians said a fair judiciary, honest multiparty elections, freedom of the press, free speech and civilian control of the military described their countries very well. Of the principles tested, freedom of religion was the one that people in these countries were most likely to say applied to their country; 44% in Lithuania, 43% in Russia and 31% in Ukraine said this was the case. 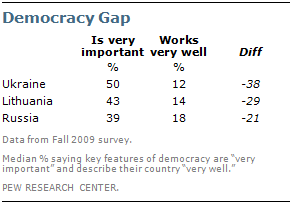 Taking the median percentage saying each of the democratic values tested were very important in each country and comparing it with the median percentage saying these values described their country very well, it is clear that there is a wide gap between what Ukrainians, Lithuanians and Russians want from democracy and the level of democracy they believe their countries have achieved. This gap was especially pronounced in Ukraine, where, in 2009, a median of 50% across the six elements of democracy tested said these features were very important, but just 12% said they described their country very well. Looking at the eight former communist countries surveyed in 2009, only in Hungary and Bulgaria was the democracy gap wider than in Ukraine (49 percentage points and 45 percentage points, respectively).