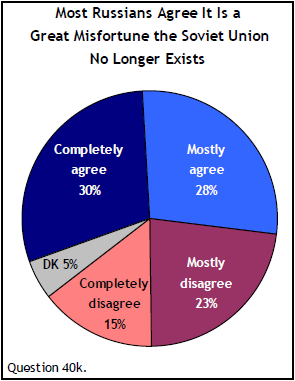 With the collapse of communist rule and the end of the Cold War, nationalism reemerged as a major issue throughout much of Eastern Europe in the 1990s. As the current survey highlights, nationalist sentiments have not disappeared, particularly in Russia. A majority of Russians consider the demise of the Soviet Union a great misfortune, and more now believe it is natural for Russia to have an empire than was the case in 1991. Large numbers in several European countries, as well as in Russia, think that parts of neighboring nations really belong to them.

Over the course of the past two decades, the European Union integrated many aspects of political and economic life in Europe. The EU also has spread eastward and has incorporated nations such as Lithuania that were formerly part of the Soviet Union. However, as this survey makes clear, no continent-wide identity has emerged to supplant national identities – people remain much more likely to think of themselves first as, say, Czechs, Poles or Italians than as Europeans. 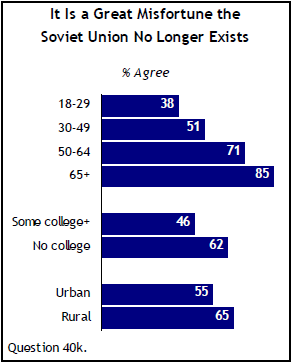 Even though on balance Russians tend to approve of the shifts to a multiparty system and a free market economy that took place in the early 1990s, there is still considerable nostalgia for the Soviet era. Nearly six-in-ten Russians either completely (30%) or mostly (28%) agree that “it is a great misfortune that the Soviet Union no longer exists.” 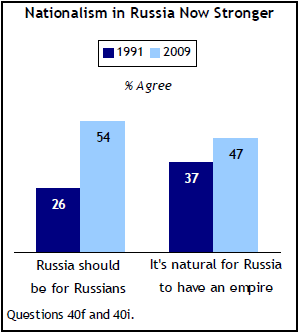 Those who have not attended college are more likely than those who have to hold this view (62% vs. 46%). And residents of rural areas (65%) express more regret about the demise of the Soviet Union than do urban dwellers (55%).

There also is evidence that Russian nationalism is on the rise. Just over half of Russians (54%) say they completely or mostly agree with the statement “Russia should be for Russians.” That is a sharp increase from 1991, when only 26% held that view.

In recent years, many observers have noted the Russian government’s continuing interest in its “near abroad” – neighboring nations that were once part of the Soviet Union – and many Russians believe it is normal for their country to project power beyond its borders. Nearly half (47%) agree that it is “natural for Russia to have an empire,” up from 37% in 1991.

Ukrainians are as likely as Russians to say it is natural for Russia to have an empire. Almost half of Ukrainians (48%) agree with this statement, a significant increase from 1991, when only 22% held this opinion. This is not necessarily an expression of support for a Russian empire; rather, it may simply reflect a perception among Ukrainians that Russia has a long imperial history.

In addition to rising nationalism in Russia, nationalist sentiments have become more
common in Lithuania – 61% completely or mostly agree with the statement “Lithuania should be
for Lithuanians,” up from 45% in 1991. 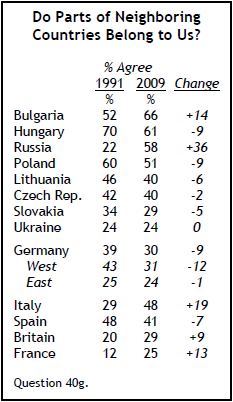 The collapse of the Iron Curtain led to a redrawing of Europe’s political map, with the disintegration of such countries as the Soviet Union and Czechoslovakia, and the creation of nations such as Ukraine and Lithuania. The 1991 Times Mirror Center survey found that European political borders were still a matter of controversy. And as the current survey highlights, in the minds of many, these issues are still unsettled nearly two decades later.

Majorities in Bulgaria, Hungary, Russia and Poland completely or mostly agree that “there are parts of neighboring countries that really belong to us.” In Russia, the share of the public that agrees has more than doubled, rising from 22% in 1991 to 58%. In Bulgaria, roughly two-thirds (66%) express this opinion, up from 52% in 1991. Hungarians are somewhat less likely to agree today, although 61% still think there are parts of other countries that belong to Hungary. Similarly, Poles are less likely to agree, but approximately half (51%) still take this view. Four-in-ten Lithuanians and Czechs think parts of neighboring countries belong to them, while this view is less widespread in Slovakia (29%) and Ukraine (24%).

Three-in-ten Germans think territory elsewhere really belongs to them, although this opinion has become much less common in the former West Germany, where 43% felt this way in 1991, compared with 31% now. In the former East Germany, views are basically unchanged – 25% agreed in 1991 and 24% do so now.

Among the Western European publics surveyed, Italians are the most likely to think parts of neighboring countries are really theirs – nearly half (48%) agree, up steeply from 29% in 1991. Fewer in Spain take this position than did so in 1991, although 41% still agree. Only 29% of the British feel this way, up from 20% in 1991. Similarly, just one-quarter in France believe parts of other countries belong to them, but this is up from 12% nearly two decades ago. 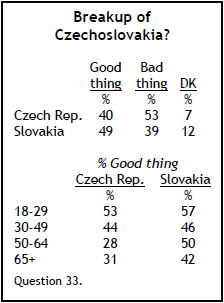 Looking back at their “Velvet Divorce” in 1993, Czechs and Slovaks express mixed feelings. More Czechs say the division of Czechoslovakia into two independent states was a bad thing (53%) than say it was a good thing (40%). In Slovakia, the opposite is true: By a margin of 49% to 39%, Slovaks say it was a good thing. 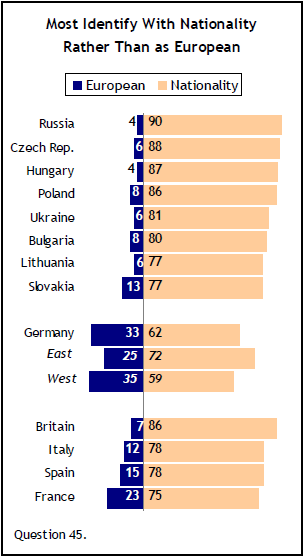 At 13%, Slovakia is the only country in Eastern Europe in which European identity breaks into double digits. European identity is low in the two nations that do not belong to the EU – Russia and Ukraine – but views in these countries do not differ substantially from those elsewhere in the region.

Germany is the nation with the highest level of identification with Europe: 33% think of themselves first as European, rather than as German. In west Germany, 35% identify themselves this way, compared with 25% in the east. European identity is especially strong among highly educated west Germans, who are basically divided on this issue: 48% identify primarily as German, while 47% identify primarily as European.

Fewer in the other Western European nations surveyed think of themselves mainly as European, although nearly a quarter in France (23%) feel this way.

Throughout Eastern and Western Europe, as well as the United States, there is support for stronger controls on immigration. In 13 of 14 nations, majorities completely or mostly agree that “we should restrict and control entry into our country more than we do now.”

Support for immigration controls is particularly high in the Czech Republic, where 80% agree with this view, up from 63% in 1991. Russians are also much more supportive of tighter immigration restrictions now (70% agree) than they were then (45%). Support has also increased in Ukraine, rising from 32% to 55%.

Opinions on this issue are identical in Slovakia and Hungary – in both nations, the share of the public who agrees with the statement has declined by 13 percentage points to 55%. In both Poland and Lithuania, 54% endorse tougher restrictions on immigration, relatively unchanged from 1991. By far, Bulgarians are the least supportive of tighter immigration controls – only 32% agree, down slightly from 38%.

Elsewhere in Western Europe, where debates about immigration and assimilation have been common in recent years, there is widespread support for tighter restrictions. In Spain, the proportion agreeing that stricter immigration controls are needed has increased from 66% in 1991 to 80% now. In Italy and Britain, there has been no change; currently, 83% of Italians and 78% of the British express this view. In France, 64% back more restrictions, however, this view is much less prevalent than it was in 1991, when 86% took this position.

Next: Chapter 8. Views of Other Countries and Organizations
← Prev Page
Page3Page4Page5Page6Page7You are reading page8Page9Page10Page11Page12Page13
Next Page →