Concerns about Russia are common in both Eastern and Western Europe. Majorities in most countries worry about being too dependent on Russia for their energy supplies, and many say Russia is having a negative influence on their countries. Still, this unease is hardly universal. In Ukraine and Bulgaria, more people say Russia is having a positive influence than a negative one.

Both Germany and the European Union earn relatively positive reviews – people in both Eastern and Western Europe tend to believe that Germany and the EU exert positive influences in their countries. Reviews for the United States are more mixed, and assessments of America’s positive impact have declined somewhat since 1991. At that point, the Cold War was ending and U.S. influence was seen in a more favorable light. 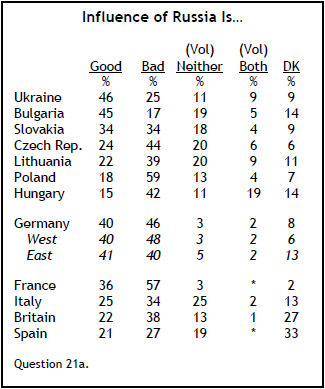 In many of the former Eastern bloc nations surveyed, large numbers believe Russia is having a negative influence on the way things are going in their countries. This is especially true in Poland, where roughly six-in-ten (59%) say Russia is having a bad influence, as well as in the Czech Republic where 44% hold this view. Nearly as many Hungarians (42%) see Russian influence as negative, although this is down from 56% in the 1991 poll when the question was asked about the influence of the Soviet Union. 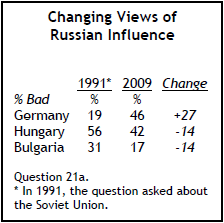 Negative assessments of Russian influence also have declined in Bulgaria – 31% described the Soviet Union’s influence as bad in 1991, compared with 17% now, the lowest percentage among the European nations surveyed.

Views about Russian influence are very different in Ukraine and Lithuania – both of which were part of the Soviet Union in 1991. On balance, Ukrainians see Russia’s influence positively (46% good, 25% bad), while Lithuanians take the opposite view (22% good, 39% bad). 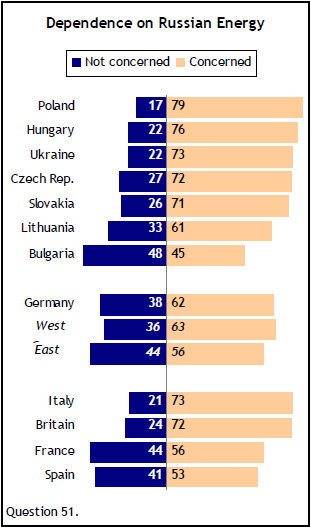 Many in Western Europe also express concerns about Russian influence, especially in France, where 57% say it is having a negative impact.

Across Europe, many are worried about being too reliant on Russia for their energy needs. More than seven-in-ten in Poland, Hungary, Ukraine, the Czech Republic and Slovakia express these concerns, along with about six-in-ten Lithuanians. Since 2007, worries about Russian energy have increased significantly in Slovakia (by 18 percentage points) and the Czech Republic (15 points). There also has been a 10-point increase in Ukraine, which has repeatedly clashed with Russia over energy issues in recent years. Concern is less prevalent among Bulgarians, who are divided on this question, although even here the share of the public saying they are worried has risen eight percentage points in the past two years. 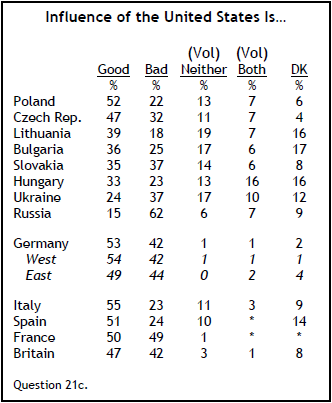 Concerns about being too dependent on Russian energy are also common in Western Europe, especially in Italy and Great Britain, where more than seven-in-ten say they are worried about this issue.

Influence of the United States

American influence receives mixed reviews in Eastern Europe and the former Soviet republics. About half of Poles (52%) and Czechs (47%) say the U.S. is having a positive impact in their countries, but elsewhere fewer express this view, especially in Russia, where only 15% describe America’s influence as good and 62% say it is bad.

In all of the Eastern European nations surveyed, U.S. influence is viewed much less positively than it was in 1991. For instance, in 1991 three-quarters of Hungarians said U.S. influence was good, compared with 33% today. Fully 60% of Ukrainians considered it good then, compared with 24% now. 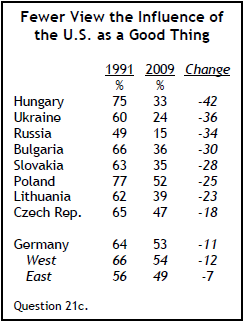 These findings are largely consistent with results from the spring 2009 Pew Global Attitudes survey, which was conducted in 24 nations and the Palestinian territories. The survey found that, despite an improvement in the overall image of the U.S., publics in Europe and elsewhere tended to say the U.S. was having a negative influence in their countries. In particular, many felt the American economy was having a negative impact on their own national economies. (For more findings from this survey, see “Confidence in Obama Lifts U.S. Image around the World; Most Muslim Publics Not So Easily Moved,” released July 23, 2009.) 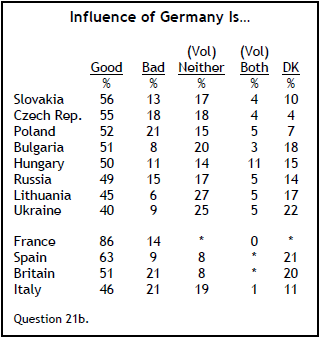 In all 12 countries in which the question was posed, majorities or pluralities say that Germany is having a good influence on the way things are going in their country.

In neighboring Poland, views about the impact of Germany have become more positive since 1991 – then, 41% of Poles described German influence as good; 52% do so today. However, in three other Eastern European nations, attitudes have moved in the opposite direction – the percentage saying German influence is good has declined by 20 points in Ukraine to 40%, 19 points in Bulgaria to 51%, and 18 points in Hungary to 50%.

Germany’s Western European neighbors express mostly positive views about its impact on their countries. The belief that Germany is having a good effect on the way things are going is widespread in France, where more than eight-in-ten (86%) take this view. Just over six-in-ten (63%) in Spain characterize German influence as positive, while somewhat fewer share this opinion in Britain (51%) and Italy (46%).

Influence of the European Union 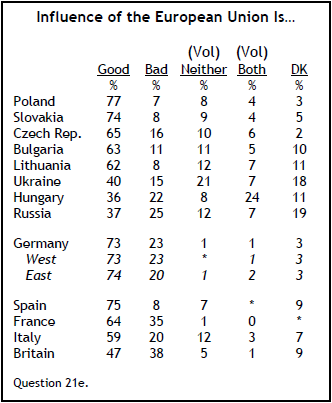 The European Union receives high marks throughout much of Europe. Among Eastern European nations, large majorities say the EU is having a positive impact on their countries in Poland (77%), Slovakia (74%), the Czech Republic (65%), Bulgaria (63%) and Lithuania (62%). All are EU members. However, in Hungary, also an EU member state, assessments are less positive – only 36% describe the organization’s influence as good.

In the two former Soviet bloc countries that are not members of the organization – Ukraine and Russia – views about EU influence are mixed, and they have become less positive in recent years. Currently 40% of Ukrainians rate the EU’s impact as good, down sharply from 2002, when 63% said it was good. Russians also have become slightly less likely to characterize EU influence as a good thing – 45% felt this way in 2002, compared with 37% now.

In Western Europe, roughly three-quarters in Spain (75%) and Germany (73%) judge the influence of the Brussels-based institution as good. In France, most (64%) say the EU’s influence is positive, although this view is less common than it was in 2002, when 79% said it was positive. Similarly, 59% of Italians say the EU’s impact is good, but this represents a 13 percentage point drop since the 2002 poll. Among Western Europeans, the British are the least enthusiastic about the EU – 47% say it is having a good impact, down from 53% seven years ago. 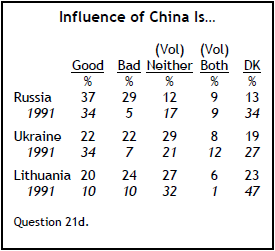 Respondents in the three former Soviet Union countries surveyed were also asked about the influence of China, and in each of these nations, more now say China’s influence is negative than was the case in 1991.

Russians are still more likely to believe China is having a good influence than a bad one (37% good, 29% bad), but the share of the public saying China’s influence is bad has increased by 24 percentage points since 1991.

Ukrainians are now split on this question (22% good, 22% bad). In the earlier survey, 34% said China’s influence was good and just 7% described it as bad. In 1991, only one-in-five Lithuanians offered an opinion about Chinese influence; today, 20% say it is good, while 24% characterize it as bad.

When asked to name the countries they can most rely on as a dependable ally in the future, as well as the countries and organizations that pose the greatest threat, Eastern Europeans offer a variety of responses. Poland is the only nation in which the United States is considered the top ally, although even here only 18% name the U.S. That is down from 40% in 1991, when as the Cold War was ending, many in Poland and other parts of the region saw the U.S. as a key partner. By a wide margin, Poles pick Russia as the biggest threat (45%); similarly, in 1991 most Poles named the Soviet Union.

Czechs and Slovaks, who shared a country from 1918 until 1993, see each other as their top ally. By a slim margin, Czechs see Russia as their greatest threat (21%), while Slovaks name Hungary (34%). Hungarians, in turn, name Slovakia as their top threat (37%). These Hungarian-Slovak tensions may in part reflect controversies over a new law in Slovakia restricting the use of languages other than Slovak in official communications. The law has drawn protests from Slovakia’s Hungarian minority community.

In Bulgaria, the top three allies are the same as they were in the 1991 survey: Russia (then the Soviet Union), Germany and the U.S. And as was the case in 1991, Turkey is considered the leading threat.

On this question, Lithuanians and Ukrainians have very different perspectives on Russia. Roughly four-in-ten Lithuanians name Russia as one of their country’s top threats (39%), while only 19% say this in Ukraine. Indeed, a majority of Ukrainians (58%) think of Russia as one of their nation’s leading allies. More than one-in-four (27%) in Ukraine see the U.S. as one of their top threats. In Russia itself, neighboring Belarus is considered the top ally (34%), while most (57%) identify the U.S. as the greatest threat, followed by Georgia (32%).

As in the Times Mirror survey two decades ago, Germans name major NATO countries as their closest allies. Nearly half (47%) of Germans name France as one of their nation’s most dependable allies, up slightly from 1991, when 41% said France. The U.S. comes in second at 37%, down from 46%. And 17% think of Britain as a dependable partner to Germany, compared with 26% in the earlier poll. Unlike the other European nations surveyed, Germans see their biggest threats in the Middle East – 27% name Iran and 21% mention Iraq. However, they do not solely look to the Middle East for threats – 19% say Russia could pose the greatest danger to Germany in the future.

Next: Chapter 9. Rating the EU and NATO
← Prev Page
Page3Page4Page5Page6Page7Page8You are reading page9Page10Page11Page12Page13
Next Page →