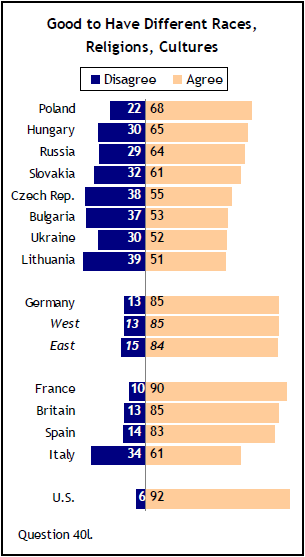 One of the major findings from the 1991 Times Mirror Center study was the high level of antipathy toward ethnic and religious minorities in Eastern Europe. With communist rule over in most of the region, and in its final stages in the Soviet Union, long-simmering conflicts among groups within these societies were reemerging. Today, in many of these nations, tensions have decreased, and there is somewhat less hostility toward ethnic and religious minorities. Even so, negative attitudes persist, and, in some cases, have grown more prevalent since 1991. 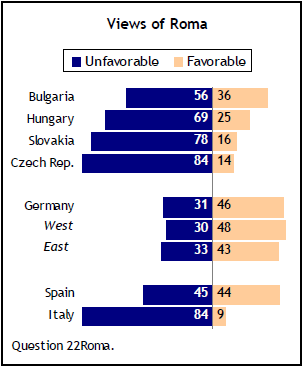 In principle, most Eastern Europeans, as well as even larger numbers in Western Europe and the United States, believe in the idea of a pluralistic society. Majorities in every country surveyed agree that “it is a good thing for any society to be made up of people from different races, religions and cultures,” although in the Czech Republic (55% agree), Bulgaria (53%), Ukraine (52%) and Lithuania (51%) the majorities are far from overwhelming.

But when asked about specific groups in their countries, many in Eastern and Western Europe express negative opinions. Most notably, views toward the Roma (also known as Gypsies) are generally negative, even though they have improved somewhat since 1991. Solid majorities in the Czech Republic, Slovakia, Hungary and Bulgaria say they have an unfavorable view of the Roma, as do 84% of Italians. In Spain, opinions are divided (44% favorable, 45% unfavorable), while Germans are more likely to have an opinion that is favorable (46%) than unfavorable (31%).

Significant minorities in Eastern Europe, including more than one-quarter in five of the nations surveyed, continue to voice negative attitudes toward Jews. In Lithuania and Hungary, anti-Jewish sentiments are much more common now than in 1991.

Negative reactions are directed at Muslims in several countries, both in Eastern and Western Europe. Roughly seven-in-ten Italians express a negative opinion of Muslims, as do nearly half in Spain. Negative views are less common in Britain.

The survey also measures attitudes toward several predominantly Muslim groups. In France, most have a positive view of North Africans, although a still sizable 26% minority expresses a negative opinion. Similarly, 30% of Germans assign an unfavorable rating to Turks, the largest minority group in Germany. In Bulgaria, Turks receive somewhat more negative ratings than do Muslim Bulgarians. 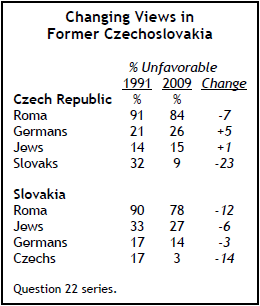 Czechs and Slovaks have overwhelmingly positive views of each other, and these ratings have grown more positive since 1991, when Czechoslovakia still existed. Currently, only 9% in the Czech Republic have an unfavorable opinion of Slovaks, down from 32% in 1991. Just 3% of Slovaks express an unfavorable view of Czechs, down from 17% in the earlier survey.

While attitudes toward the Roma have grown slightly more positive in both nations, they remain overwhelmingly negative: fully 84% of Czechs and 78% of Slovaks say in the current survey they have an unfavorable view of Roma.

Slightly more than a quarter in Slovakia (27%) have a negative opinion of Jews, down six percentage points from 1991, while 15% of Czechs voice a negative view. Germans now receive a slightly more negative rating in the Czech Republic (26% unfavorable) than they did in 1991. Only 14% in Slovakia give Germans an unfavorable rating. 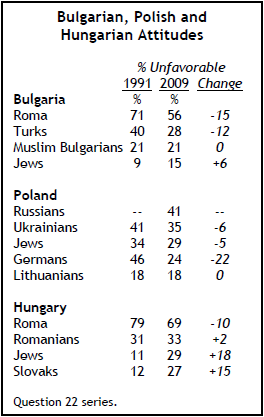 In Bulgaria, opinions of Roma and Turks have become less negative, although a majority (56%) continue to express an unfavorable view of Roma and more than one-quarter (28%) say this about Turks. About one-in-five (21%) have a negative opinion of Muslim Bulgarians, and 15% give Jews a negative rating, up slightly from 1991.

Since 1991, Poles’ views of Germans have shifted dramatically – in 1991, nearly half (46%) had negative views about Germans, compared with 24% today. Unfavorable views of Ukrainians and Jews have declined slightly, although many continue to express negative opinions, including more than a third who feel this way about Ukrainians. Russians – who were not tested in 1991 – also get lukewarm reactions, as 41% of Poles say they have an unfavorable opinion of them.

In Hungary, negative sentiments about Jews and Slovaks have increased – while roughly one-in-ten had an unfavorable view of these groups two decades ago, 29% now say they have a negative opinion of Jews and 27% say this about Slovaks. One-third continue to express negative views about Romanians, and even though there has been a decline in negative attitudes toward Roma, 69% still say their impression of the Roma people is unfavorable.

Attitudes in the Former Soviet Republics 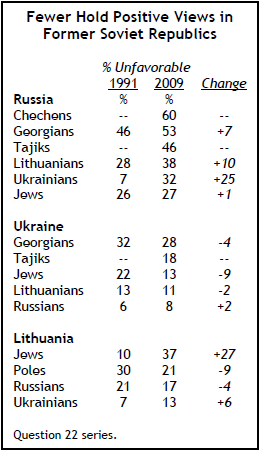 In several instances, opinions of ethnic and religious minorities have become more negative since the end of communism in the three former Soviet republics surveyed. Notably, Russian views about the dominant ethnic groups in several former republics of the Soviet Union are more negative now than they were in 1991.

More Russians now hold negative opinions of Ukrainians – 32% feel this way, compared with 7% in 1991. Similarly, unfavorable ratings for Lithuanians have increased in Russia, from 28% in 1991 to 38% today.

Russian attitudes toward Georgians have also grown more negative: 46% expressed an unfavorable view of Georgians in 1991. Today, roughly one year after the military conflict between Russia and Georgia, 53% do so.

Chechens and Tajiks were not included in 1991, but currently many Russians hold negative views of these predominantly Muslim ethnic groups – 60% feel this way about Chechens and 46% say this about Tajiks.

Ukrainians tend to give positive ratings to the five ethnic groups tested there: Russians, Lithuanians, Jews, Tajiks and Georgians. Negative opinions about Jews have declined by nine percentage points to 13% since 1991.

In 1991, anti-Jewish sentiments were less prevalent in Lithuania than in Russia or Ukraine, but that is no longer the case. Currently, 37% of Lithuanians express a negative view of Jews, up 27 percentage points. Lithuanian attitudes toward Poles, meanwhile, have grown less negative (down nine points) since the earlier survey. Fewer than one-in-five hold negative views of Russians or Ukrainians. 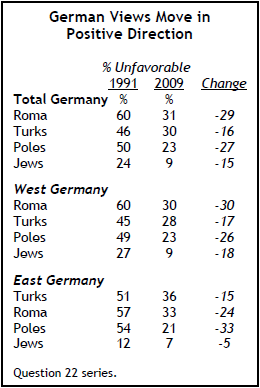 There has been a clear pattern in Germany over the past two decades: Attitudes toward minorities have become more positive. And this is in both the former East Germany and former West Germany.

Negative ratings for Turks, Roma and Poles have declined by double digits in the east and the west. And in west Germany, unfavorable ratings for Jews have dropped steeply, from 27% in 1991 to 9% today. Negative views toward Jews were already low in east Germany in 1991 and have decreased further to 7% in the current survey.

Attitudes in Western Europe and the U.S.

Respondents in Western Europe and the United States were also asked about groups in their countries. In Britain, France and the U.S., the minority groups tested receive generally positive ratings, while in Italy and Spain views are less positive.

French attitudes toward Jews are overwhelmingly positive, as only 10% have a negative view. More express a negative opinion of North Africans (26%), although this view has become much less common since 1991, when 43% had an unfavorable opinion.

Different groups receive very different ratings in Italy. Roma (84% unfavorable) and Muslims (69%) receive largely negative ratings. About three-in-ten (29%) have an unfavorable view of Jews, while only 11% feel that way about Christians. Spanish public opinion is divided over both Roma and Muslims – 45% express a negative view of Roma, while 46% have a negative opinion of Muslims.

All groups tested in the current survey in the United States receive positive marks. Nearly nine-in-ten (89%) Americans have a favorable view of whites, who comprise a majority of the country, and about as many have a positive opinion of blacks (86%). Majorities also rate Asians (81%) and Hispanics (77%) favorably.