Most of the publics in the 14 nations included in the survey are dissatisfied – some by overwhelming margins – with the way things are going in their countries, and majorities in all see their economies as struggling. In most of the Eastern European and former Soviet countries surveyed, people see their nations plagued by corruption, crime and illegal drugs.

Despite some common perceptions about what they view as major national problems, the publics in the former Soviet bloc see their leaders in very different lights. For example, despite broad dissatisfaction with current conditions, 70% of Bulgarians say they approve of the performance of their new prime minister, Boiko Borisov, who took office in July. At the same time, 83% of Ukrainians disapprove of the job being done by their president, Viktor Yushchenko, the country’s leader during a time of economic trouble and continuing tensions with neighboring Russia. 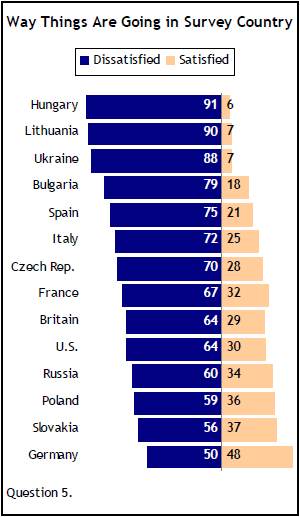 Majorities in 13 of the 14 nations surveyed are dissatisfied with the way things are going in their countries. Dissatisfaction is pervasive among several Eastern European publics – Hungary (91%), Lithuania (90%), Ukraine (88%) and Bulgaria (79%). But it is also high in Western Europe, particularly in Spain (75%) and Italy (72%).

While the survey comes as many nations are grappling with the effects of the recent economic meltdown, the levels of satisfaction among former Eastern bloc nations, in most cases, have changed little or even increased since 2007. For example, in Poland, 36% say they are satisfied with the way things are going there, up from 18% in 2007 and 9% in 2002. In Bulgaria, a relatively low 18% say they are satisfied, but that is up from 9% in 2007 and 4% in 2002. 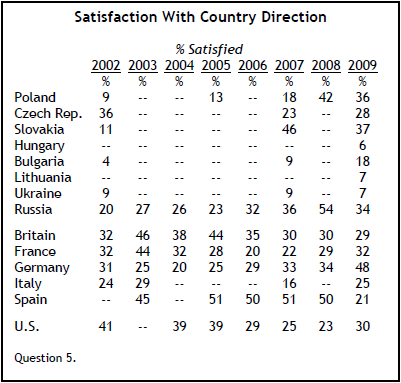 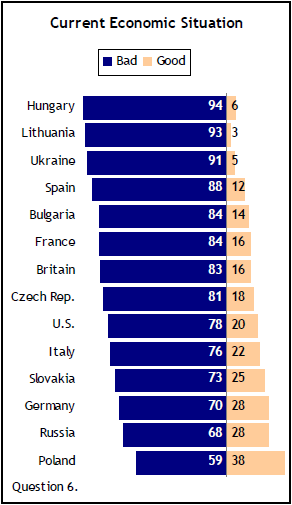 Majorities in all of the countries surveyed say the economic situation in their nation is bad. In several of the Eastern European and former Soviet nations, negative evaluations are nearly universal, including Hungary (94%), Lithuania (93%) and Ukraine (91%). Large majorities in the Western European countries also rate their economies as bad.

In those cases where there are trends, positive economic ratings have declined, in most instances significantly, since the spring of 2007, before the start of the current economic downturn. The one exception is Poland, where there has been no change compared with two years ago: 38% currently view the economic situation there positively, compared with 36% in 2007. That is up sharply from 7% rating the economy as good in 2002.

In several other countries where comparative data is available, the trends have been negative. In 2007, 19% of Ukrainians gave their country’s economy a positive evaluation; today, just 5% do so. There have been larger declines in positive views of the economies in the Czech Republic, Slovakia and Germany. In the Czech Republic, 18% describe the economy as good, down from 41% in 2007. In Slovakia, the percentage giving the economy a good rating dropped from 53% in 2007 to 25% this fall. In Germany, 63% gave the economy a positive rating in 2007; 28% do so today.

The 35-point decline in positive economic views in Germany is comparable to the 30- point drop in the United States; in 2007, 50% of Americans gave the economy a positive rating compared with just 20% today. In Britain, the decline has been even greater: from 69% in 2007 to 16% today, a decline of 53 points.

In some nations, concerns about corruption have eased somewhat since 2002. Currently, 58% in Poland say they see corrupt leaders as a very big problem, compared with 70% who said the same in 2002. In Slovakia, there has been a drop from 79% in 2002 to 52%, while in Russia the percentage fell from 61% to 52%. And among those in what was East Germany, the percentage that says corrupt leaders are a very big problem is down 12 points from 43% in 2002.

More than six-in-ten Ukrainians (64%) and Bulgarians (62%) say pollution is a very big problem for their country. Hungarians are not far behind at 58%. Views in Ukraine and Bulgaria are little changed from 2007, but, in the same time period, the percentage of Russians who say pollution is a very big problem has fallen from 61% to 52%, and the percentage of Slovakians expressing this view fell has declined 52% to 39%.

Among the nations in the survey, Lithuanians express the greatest concern about people leaving their country for jobs elsewhere, with six-in-ten (60%) saying that this is a very big problem. About half of Bulgarians (51%) agree, but the publics in the other nations generally see emigration as less of a problem.

More than four-in-ten Bulgarians (42%) and east Germans (45%) say the poor quality of schools is a very big problem in their country, higher than other nations in the survey and in both cases up from the percentage that cited school quality as a very big problem (23% and 38%, respectively) in 2002. Meanwhile, concerns about schools have dropped significantly since that time in the Czech Republic (41% then to 22%) and Slovakia (50% then to 27%). 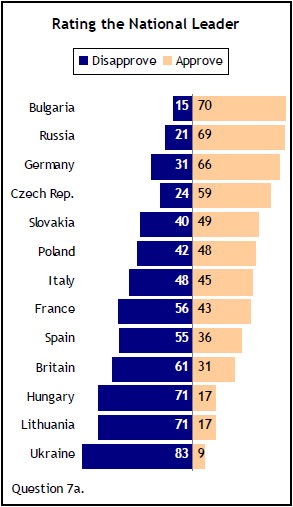 Majorities in only four of the publics surveyed – Bulgaria, Russia, Germany and the Czech Republic – approve of the way their government’s leader is handling the job.

Approval ratings for the leaders in the Eastern European range from a high of 70% for new Bulgarian Prime Minister Boiko Borisov to just 9% for Ukrainian President Viktor Yushchenko. And with the exception of German Chancellor Angela Merkel (66%), all of the ratings for Western European leaders are more negative than positive.

Today’s Russian leaders get much higher approval ratings than their predecessors in 1991, during the final days of the Soviet Union. Until the end of that year, Mikhail Gorbachev was president of the Soviet Union, and Boris Yeltsin was president of the Russian Republic. At that time, just 22% of Russians approved of Gorbachev’s job performance, while 39% said they approved of the way Yeltsin was handling his job.

Today, only small percentages approve of the way Ukraine’s Yushchenko (9%) or Lithuanian Prime Minister Andrius Kubilius (17%) are handling their jobs. The numbers are down from 1991, when 36% approved of the job being done by Vitold Fokin, the prime minister of the Ukrainian Republic at the time, or Vytautas Landsbergis, who was the chairman of the Supreme Council of Lithuania. 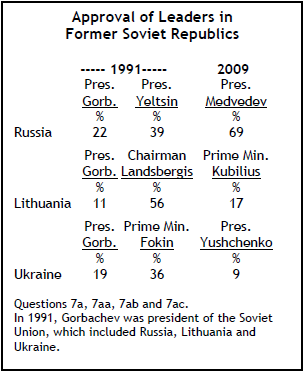 At that time, Lithuanians and Ukrainians showed little support for Gorbachev (11% and 19% approval, respectively) in his role as president of the Soviet Union.

Meanwhile, Germans – both in the west and the east – rate Merkel’s performance more highly than they did Chancellor Helmut Kohl’s in 1991. Today, about two-thirds of Germans (66%) say they approve of the way Merkel is handling her job with little difference between the west (67%) and the east (65%). In 1991, about four-in-ten (41%) Germans approved of Kohl’s performance – 40% in the west and 44% in the east. 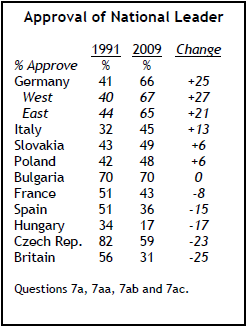 Approval ratings for the leaders of Britain, France and Spain are down from 1991. Currently, 31% approve of British Prime Minister Gordon Brown’s job performance, compared with 56% for John Major’s in 1991, 36% approve of Spain’s Prime Minister José Luis Rodriguez Zapatero; in 1991, 51% approved of Felipe González’s job performance; and French President Nicolas Sarkozy’s 43% approval rating is lower than François Mitterrand’s 51% rating in 1991.

Next: Chapter 11. Religiosity and the Role of Religion
← Prev Page
Page3Page4Page5Page6Page7Page8Page9Page10You are reading page11Page12Page13
Next Page →