As has been the case in recent years, people around the world hold mostly negative views of Iran. Majorities or pluralities in 20 of the 24 countries surveyed express unfavorable opinions about the largely Shia nation, and opinions are often as negative in other Muslim nations as they are in other parts of the world. Many Muslim publics also continue to express doubt about Iranian President Mahmoud Ahmadinejad and majorities of Muslims in six of eight countries with large Muslim populations are opposed to Iran acquiring nuclear weapons. Still, Muslims in the Middle East, Asia and Africa generally do not think a nuclear-armed Iran would pose much of a threat to their country.

More than two-thirds in Poland (68%), Brazil (69%), Japan (70%), Spain (77%), France (82%), and Germany (82%) offer unfavorable ratings of Iran, as do somewhat smaller majorities in 11 other countries, including those in Iran’s backyard. Fully 66% in Lebanon, 56% in Turkey, 56% in Jordan, and 54% in Egypt express negative opinions of Iran, while publics in Nigeria and Tanzania, where there are sizable Muslim minorities, are split.

In Nigeria, Tanzania and Lebanon, views of Iran reflect religious differences. About two-thirds of Nigerian Muslims (68%) have a positive view, and the balance of opinion is also favorable among Muslims in Tanzania (42% vs. 35%). In contrast, only 16% of Christians in Nigeria and 29% of Christians in Tanzania have favorable views and 65% and 40%, respectively, have unfavorable views of the Muslim nation. Lebanese Muslims are split (48% favorable vs. 50% unfavorable), mirroring the divide between Shia and Sunnis in that country, while Lebanese Christians have a decidedly negative opinion of Iran (90% unfavorable vs. 11% favorable).

Positive views of Iran have declined in six countries, including an 11-point drop in Indonesia (from 64% in 2007 to 53% today) and smaller drops in Jordan (5 points) and Turkey (4 points). Fewer people also offer positive ratings in Mexico, India and Spain.

Publics in Great Britain, France, Brazil and the United States, however, offer somewhat more favorable opinions of Iran than they did in 2007, even though Iran’s image remains largely negative in those countries. Favorable ratings have increased the most in Britain, where one-third of respondents have a positive impression of Iran, compared with about a quarter in 2007 (24%). Fewer than half in Britain (46%) rate Iran negatively, down from 57%. In the U.S., one-in-five have a favorable view of Iran, compared with 14% a year ago.

How Muslims View Iran and Its Leader

While Iran is viewed negatively in nearly every country surveyed, Muslim publics in the Middle East, Asia, and Africa offer mixed opinions about Iran and its president. Majorities in Turkey (55%), Jordan (55%) and Egypt (53%) rate Iran unfavorably and even larger majorities in the three countries say they lack confidence in Mahmoud Ahmadinejad to do the right thing regarding world affairs (59% in Turkey, 71% in Jordan, and 73% in Egypt).

In Lebanon, Muslim opinions about Iran and its president reflect differences between Sunnis and Shia. Sunnis are nearly unanimous in their negative view of the Shia nation (94%) while Shia Muslims are equally united in offering positive opinions (97%). Views of Ahmadinejad are equally polarized – 96% of Lebanese Shia have confidence in the leader to do the right thing regarding world affairs and 98% of Sunnis do not.

Lebanese Muslims express considerably more confidence in Iran’s president than they did a year ago, a change that reflects increasingly positive views among the Shia population. Fully 96% of Lebanese Shia have confidence in Ahmadinejad to do the right thing internationally, up from an already strong 75%-majority in 2007. Confidence in the Iranian leader is about as low as it was a year ago among Lebanese Sunnis (98% unfavorable today vs. 93% in 2007). 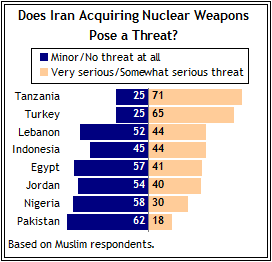 Despite widespread opposition to Iran’s nuclear weapons program among Muslim publics, majorities of Muslims in five of eight countries surveyed do not think a nuclear-armed Iran would represent a threat to their country. Muslims in Pakistan and Nigeria are the least concerned about the possibility of Iran acquiring nuclear weapons – solid majorities in those countries say it would not pose a serious threat, while fewer than one-in-three believe it would pose a serious threat. On the other hand, about two-thirds of Muslims in Turkey (65%) and 71% in Tanzania see Iran’s nuclear weapons program as a potential threat.

In Lebanon, opinions about Iran’s nuclear weapons program again reflect religious and sectarian divides. About nine-in-ten Shia (91%) would welcome a nuclear-armed Iran. In contrast, nearly every Christian (95%) and Sunni (98%) respondent is against Iran obtaining nuclear weapons. And while 52% of all Lebanese Muslims say a nuclear-armed Iran would not pose much of a threat to their country – a position held by 94% of Shia – about eight-in-ten Sunni Muslims (81%) and 87% of Christians worry that Iran would pose a threat to Lebanon if it were to acquire weapons.

Differences in opinion by religion are also evident in Nigeria. Nearly six-in-ten Nigerian Muslims (58%) would be in favor of Iran obtaining nuclear weapons, and the same number do not think Iran would pose much of a threat to their country if it were to acquire such weapons. Among Christians, however, 71% would be against Iran acquiring nuclear weapons and 65% think a nuclear-armed Iran would pose a serious threat to Nigeria.

Next: Chapter 7. Which Governments Respect the Rights of Their People?
← Prev Page
Page1Page2Page3Page4Page5Page6You are reading page7Page8Page9Page10
Next Page →