The youngest adults, those ages 18 to 29, differ from older Americans in their news consumption habits as well as in their responses to major 2020 news events and the coverage they receive – and this often holds true between younger and older adults belonging to the same political party.

Here are five facts about how 18- to 29-year-olds view the coverage and messaging around several dominant stories – particularly the demonstrations following the killing of George Floyd in police custody and the coronavirus pandemic.

To explore how younger Americans’ views differ from those of older adults on the COVID-19 pandemic and the protests following the killing of George Floyd in police custody, we surveyed 9,654 U.S. adults from June 4 to 10, 2020, as part of the American News Pathways project. Everyone who took part is a member of Pew Research Center’s American Trends Panel (ATP), an online survey panel that is recruited through national, random sampling of residential addresses. This way nearly all U.S. adults have a chance of selection. The survey is weighted to be representative of the U.S. adult population by gender, race, ethnicity, partisan affiliation, education and other categories. Read more about the ATP’s methodology. You can find all of the data from this analysis in this interactive tool. Here are the questions used for the report, along with responses, and its methodology. 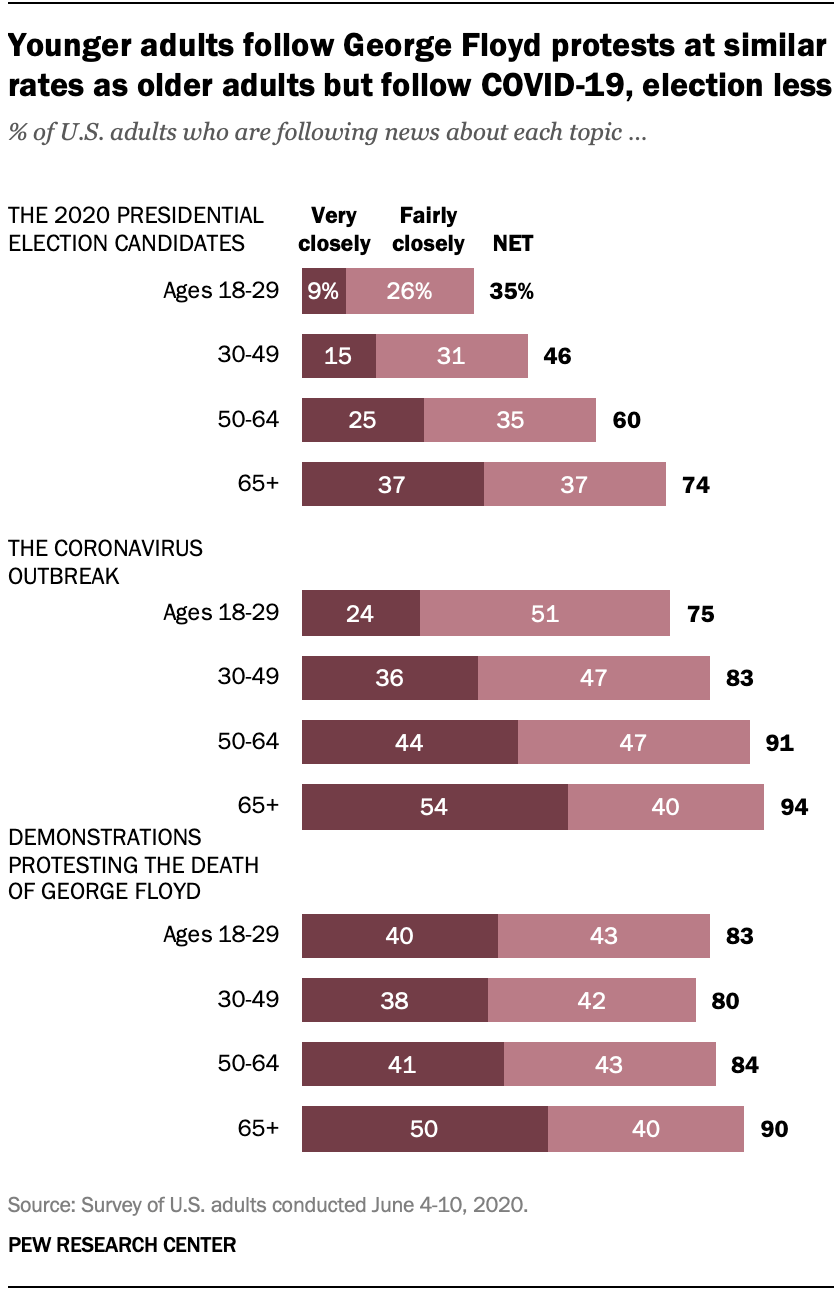 1Younger adults don’t follow election and pandemic news as closely as older ones, but that gap vanishes with the George Floyd demonstrations. Only about one-third of Americans ages 18 to 29 (35%) are following news about the 2020 presidential candidates very or fairly closely, according to a Pew Research Center survey of U.S. adults conducted June 4-10 as part of the American News Pathways project. That compares with 46% of those ages 30 to 49, 60% of those ages 50 to 64 and 74% of those 65 and older. There is a similar pattern with the coronavirus pandemic. While 75% of 18- to 29-year-olds follow that news very or fairly closely, that is less than the three older groups, where that number ranges from 83% to 94%.

That gap closes when it comes to coverage of the protests following the police killing of George Floyd. About eight-in-ten of the youngest adults (83%) follow that news very or fairly closely – roughly on par with every other age group except those 65 and older (90%).

In one respect, those ages 18 to 29 are more engaged than other age groups. Nearly half (46%) say they discuss the demonstrations with others almost all or most of the time – 10 percentage points higher than any other age group. 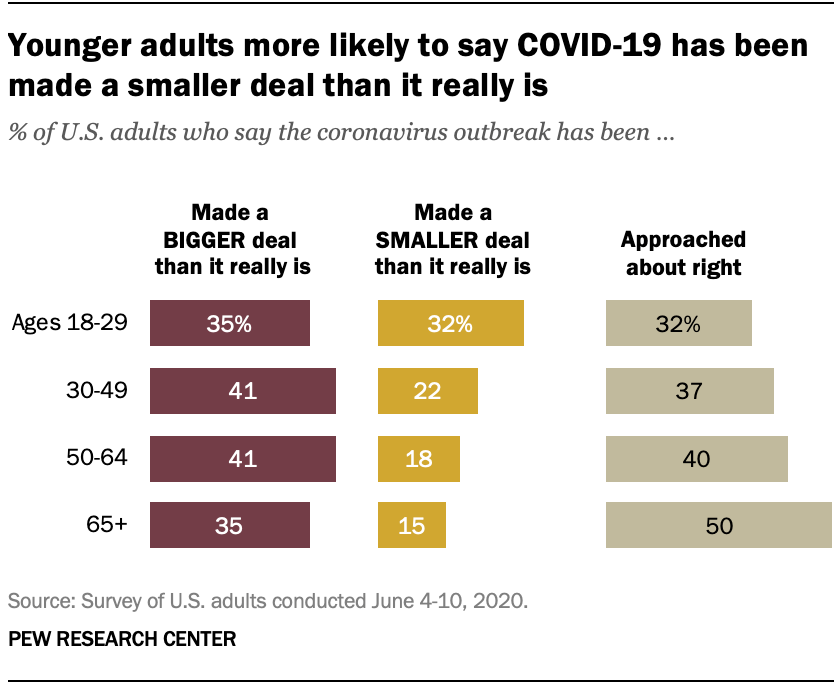 About a third of 18- to 29-year-olds (35%) say the pandemic has been made a bigger deal than it really is, close to the overall average. But those youngest adults are more likely to say it has been made a smaller deal (32%) than any other age group. At the same time, fewer 18- to 29-year-olds say the outbreak has been approached about right (32%) than any other age group. 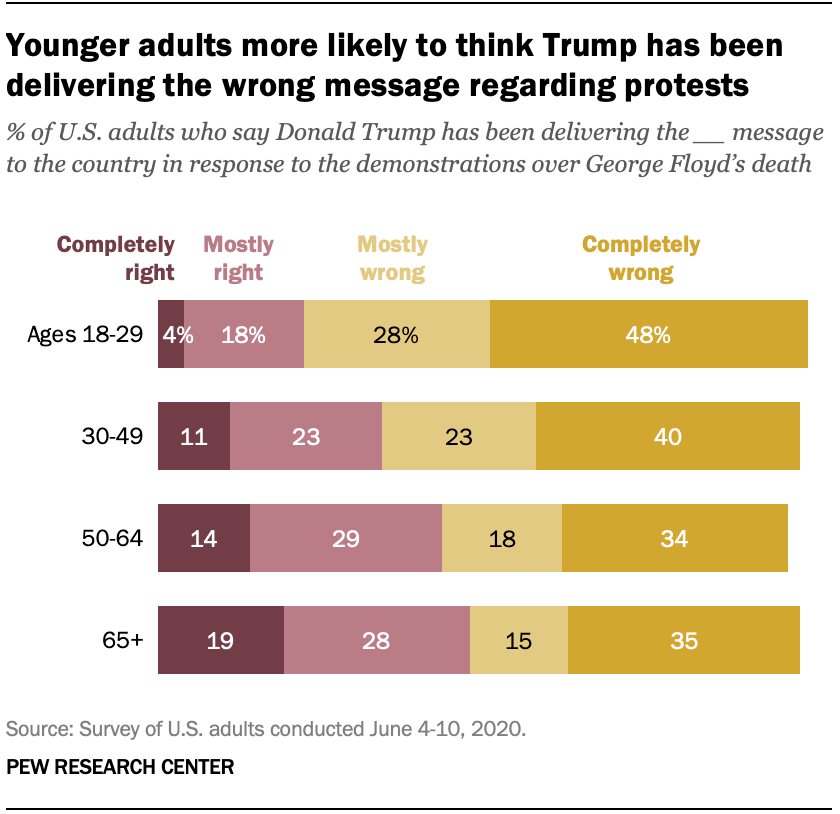 3Americans ages 18 to 29 offer the most critical evaluation of Donald Trump regarding the George Floyd demonstrations and coronavirus outbreak. While six-in-ten U.S. adults say Trump has been delivering a mostly or completely wrong message in response to the Floyd demonstrations, that number rises to 76% among 18- to 29-year-olds. The next harshest critics are those ages 30 to 49, at 63%, with that number falling to 53% among those ages 50 to 64 and to 49% among those 65 and older.

About three-quarters of adults ages 18 to 29 (77%) also say Trump and his administration get their facts right about the coronavirus pandemic only some of the time or hardly ever. That number drops to 68%, 61% and 56%, respectively, among the three older groups.

The youngest adults are also less likely than other age groups, especially those over age 50, to closely follow what Trump has been saying in regard to these two news stories, with around half very or fairly closely following his statements relating to the Floyd demonstrations (50%) and the coronavirus outbreak (52%). Among those 50 and older, the shares who very or fairly closely follow what Trump has been saying on the Floyd demonstrations range from 65% among ages 50 to 64 to 79% among adults 65 and older. On the president’s statements about COVID-19, those numbers are 78% and 84%, respectively. Those ages 30 to 49 fall in the middle on these topics.

4Adults under age 30 offer the most critical evaluation of the media regarding the George Floyd demonstrations and coronavirus outbreak. As with Trump’s messaging, the news media fare worst among those ages 18 to 29. Fewer than half of those adults (43%) say news organizations have done very or somewhat well in covering the George Floyd protests. The next lowest grade comes from those ages 30 to 49, at 56%.

The public’s assessment of media coverage of the pandemic is more positive across the board, with 71% of all adults saying journalists have done very or somewhat well. But that percentage is lowest among 18- to 29-year-olds, at 63%.

In addition, a solid majority of those 18 to 29 (61%) say the media in general only sometimes or hardly ever get their facts right about the coronavirus outbreak. For the other three age groups, that percentage ranges from 52% to 45%.

One source for COVID-19 information that 18- to 29-year-olds find about as credible as the other age groups is the Centers for Disease Control and Prevention and other public health organizations. Two-thirds (67%) of those younger adults say those organizations get their facts right almost all or most of the time, compared with 61% of those ages 30 to 49, 64% of those 50 to 64 and 67% of those 65 and older. 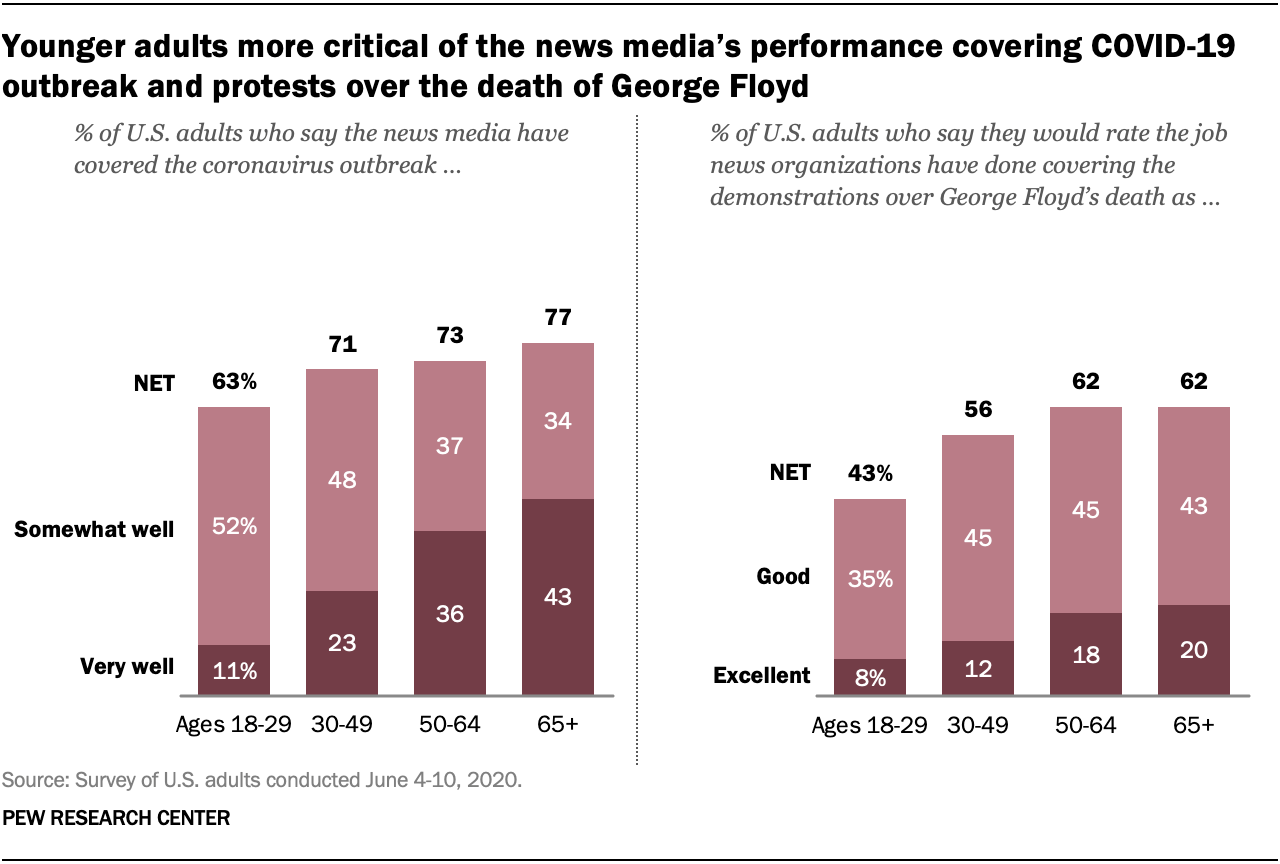 5Democrats ages 18 to 29 differ from other Democrats in views of the media, while Republicans under 30 differ from other Republicans on Trump. Democrats overall tend to express more favorable views of the media than Republicans, but the youngest Democrats have a considerably less favorable view than other age groups in the party. Large majorities of Democrats in older age groups – from 69% among 30- to 49-year-olds to 92% of those 65 and older – say journalists have done an excellent or good job covering the George Floyd protests. Among those ages 18 to 29, 46% agree with that assessment. 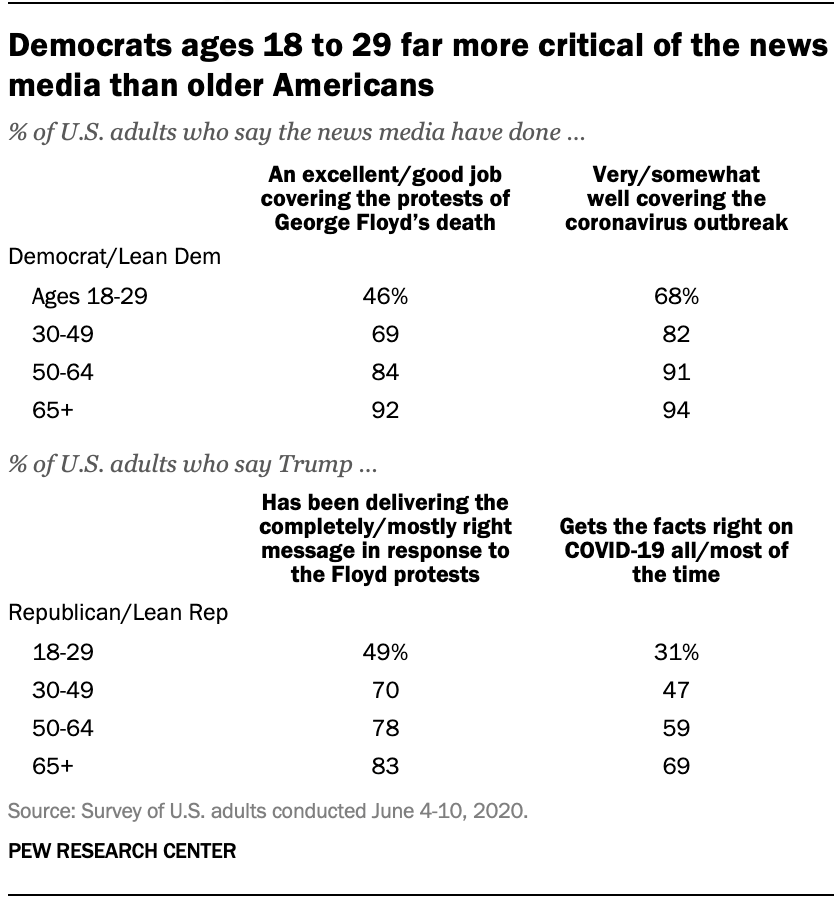 On the Republican side, large majorities of those in the three older age groups — ranging from 70% to 83% – say Trump’s message on the Floyd protests has been completely or mostly right. But only about half of those between 18 and 29 (49%) give the president those high marks for messaging.

In regard to the coronavirus outbreak, about one-third (31%) of Republicans ages 18 to 29 say Trump and his administration get their facts right almost all or most of the time. That is, by a substantial margin, the lowest percentage of any Republican age group and roughly half as many as among Republicans age 65 and older (69%) who say the same.

Note: You can find all of the data from this analysis in this interactive tool. Here are the questions used for the report, along with responses, and its methodology.

A growing share of voters say it’s important to them to hear from the Trump and Biden campaigns
A month before George Floyd’s death, black and white Americans differed sharply in confidence in the police
Black, Hispanic and white adults feel the news media misunderstand them, but for very different reasons
Recent protest attendees are more racially and ethnically diverse, younger than Americans overall
Support for Black Lives Matter declined after George Floyd protests, but has remained unchanged since