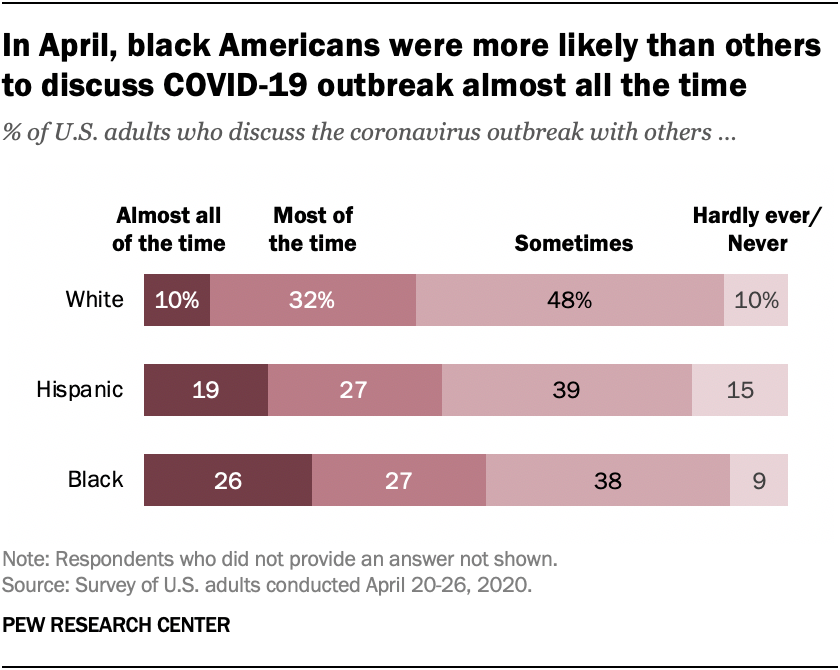 This analysis of how black Americans follow many coronavirus topics more closely than white and Hispanic Americans is based on a survey of 10,139 U.S. adults conducted April 20-26, 2020. Everyone who took part in the survey is a member of Pew Research Center’s American Trends Panel, an online survey panel that is recruited through national, random sampling of residential addresses.

Here are the questions asked for this survey, along with responses, and its methodology.

What black Americans are discussing with others about the outbreak may be influenced by the topics of the outbreak they follow. Of 13 COVID-related topics asked about in the survey — both national and local — black Americans were more likely than white and Hispanic adults to be very closely following most of them. That gap in interest is particularly pronounced between black and white respondents.

At the national level, 55% of black adults said they were very closely following news about the health impact of the COVID-19 outbreak on people like them, substantially more than the 36% of white adults and the 43% of Hispanic adults who do so. 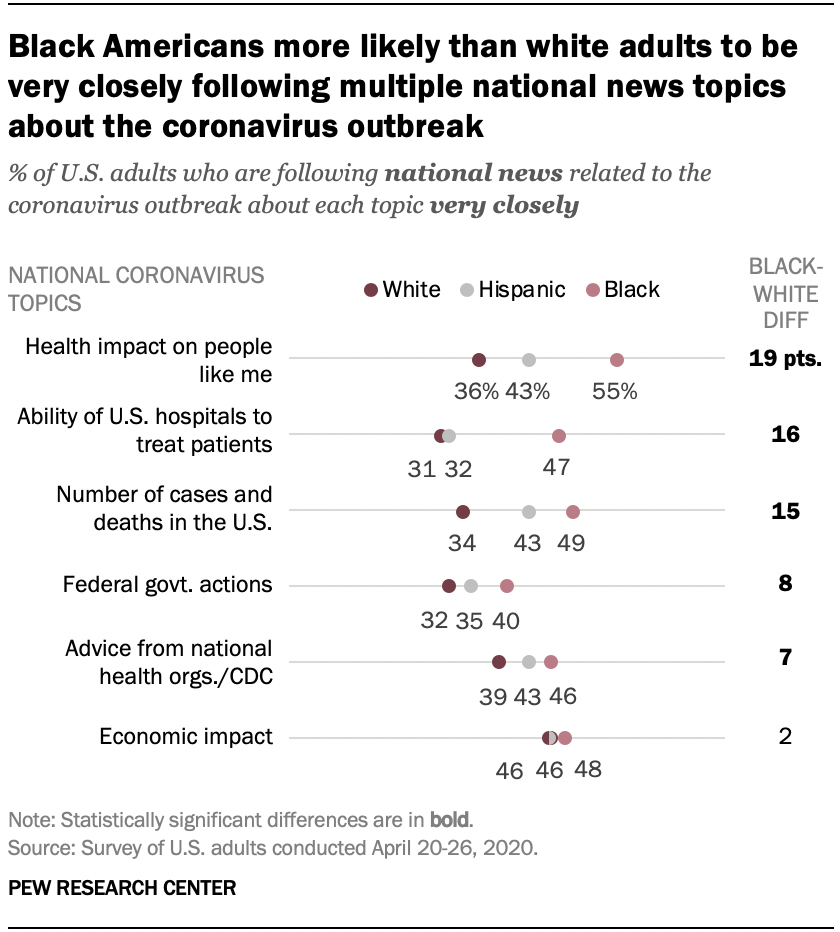 There are more gaps when it comes to local coronavirus topics. Black respondents were more likely than those in the other two racial and ethnic groups to keep a very close eye on all seven topic areas asked about. 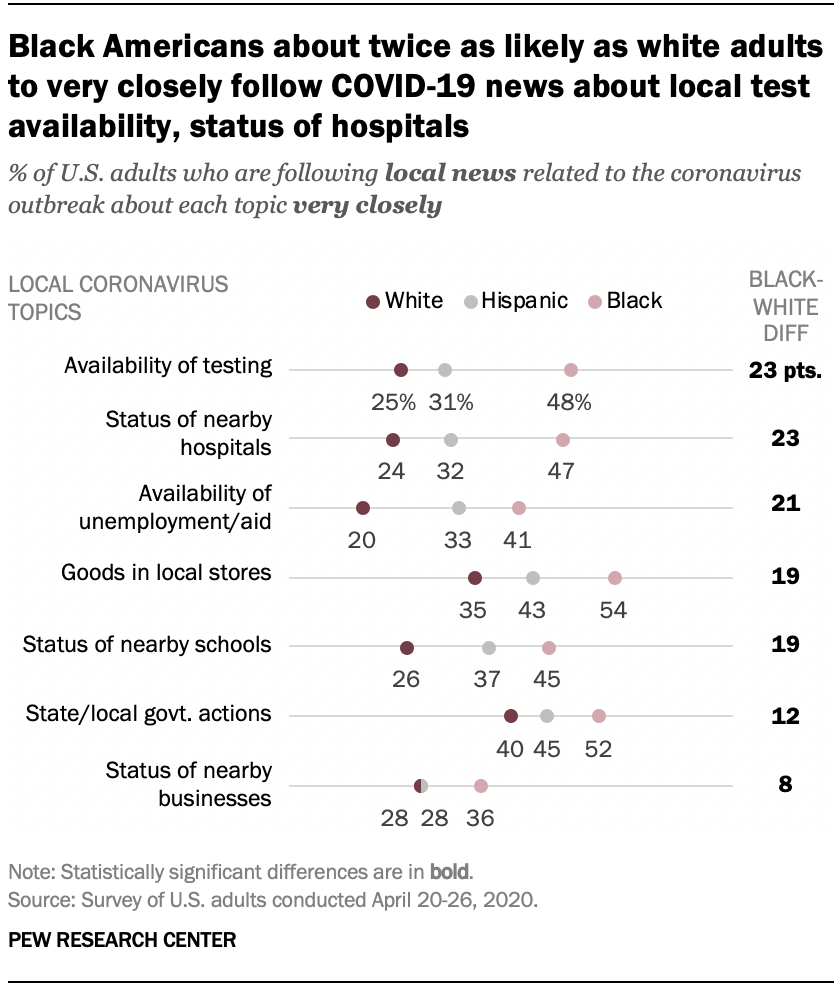 About half (48%) of black adults were very closely following local news about the availability of COVID-19 tests, nearly twice the share of white adults (25%) and higher than the 31% of Hispanic adults. A similar portion of black Americans (47%) said they were very closely following the status of nearby hospitals – again about twice the percentage as white adults (24%) and also substantially higher than the share among Hispanic adults (32%).

News about the availability of food and other local goods was also more closely tracked by black Americans (54% follow it very closely) than by white (35%) or Hispanic adults (43%). And about four-in-ten black adults (41%) said they are very closely following local news related to the availability of unemployment benefits and other aid, compared with two-in-ten white adults and a third of Hispanics. 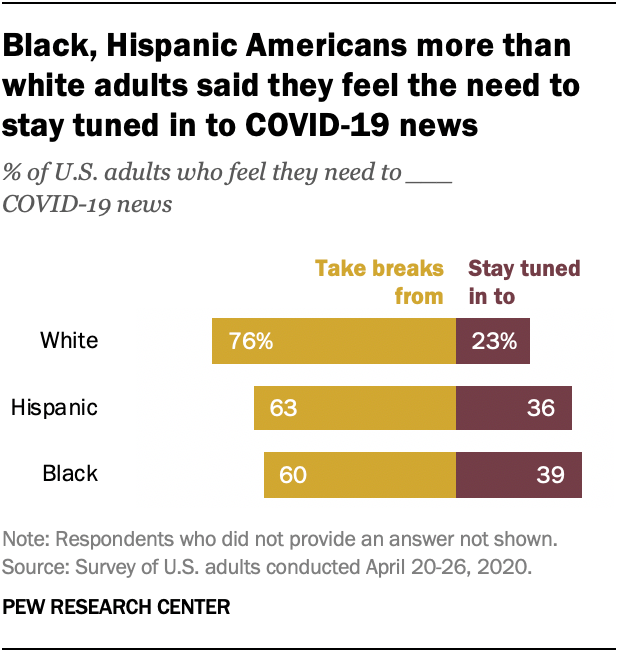 Both black and Hispanic respondents were more likely than whites to say they feel they need to stay tuned in to news about the coronavirus outbreak. Roughly four-in-ten black adults said this (39%), as did 36% of Hispanics. Around a quarter of white adults (23%) said the same. Still, majorities in all three groups said they need to take breaks from this news from time to time (76% of white, 63% of Hispanic and 60% of black adults).

Note: You can find all of the data from this analysis in this interactive tool. Here are the questions asked for this survey, along with responses, and its methodology.