In that respect, COVID-19 may yet do what years of advocacy have failed to: Make telework a benefit available to more than a relative handful of U.S. workers. Only 7% of civilian workers in the United States, or roughly 9.8 million of the nation’s approximately 140 million civilian workers, have access to a “flexible workplace” benefit, or telework, according to the 2019 National Compensation Survey (NCS) from the federal Bureau of Labor Statistics. And those workers who have access to it are largely managers, other white-collar professionals and the highly paid. (“Civilian workers” refers to private industry workers and state and local government workers combined.)

The main source for this post is the 2019 National Compensation Survey, an annual survey of pay and benefits conducted by the federal Bureau of Labor Statistics. A total of 9,881 U.S. business establishments (such as individual offices, stores or factories) and 1,596 state and local government entities (such as school districts or police departments) were surveyed. Of these, 6,470 business establishments and 1,441 governmental entities responded.

To determine who had access to telework, we used the BLS’s definition of “flexible workplace” benefits. Such benefits allow workers to “work an agreed-upon portion of their work schedule at home or at some other approved location, such as a regional work center. Such arrangements are especially compatible with work requiring the use of computers linking the home or work center to the central office.”

Some jobs, by their very nature, are difficult or impossible to do away from the standard worksite: Think of restaurant servers, hair stylists, plumbers, police officers or construction workers. In fact, according to the NCS, just 1% of service-sector workers and the same share of construction workers have access to telework, the lowest shares among major occupational groups.

So who does have this perk? Generally speaking, so-called “knowledge workers” and people who do most of their work on computers. Around a quarter (24%) of workers in “management, business and financial” occupations – such as corporate executives, IT managers, financial analysts, accountants and insurance underwriters – have access to telework. So do 14% of “professional and related” workers, such as lawyers, software designers, scientists and engineers. 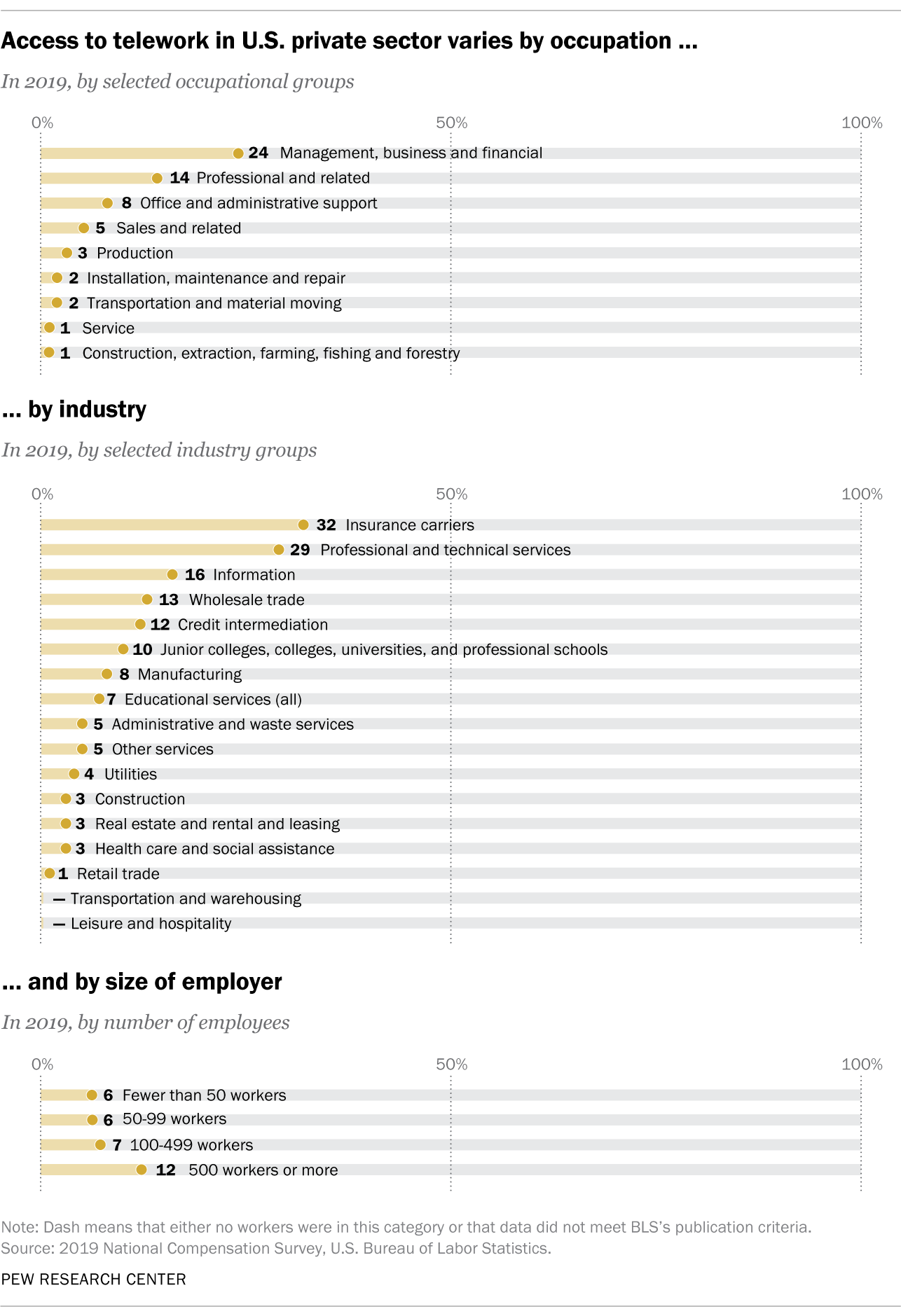 Looking at telework access by industry reveals a similar pattern. About a third of employers of insurance carriers (32%) have this benefit, followed closely by “professional and technical services” (29%), such as law firms, accounting firms, advertising agencies and consultancies. The information sector has the third-highest share of workers with telework access: 16% of workers in this industry have it.

Employees of larger firms are more likely to be offered telework as an option. At business places with 500 or more workers, 12% have access to telework, compared with 6% at places with fewer than 100 workers. (The NCS is a survey of “establishments,” not workers. An establishment in the private sector is typically a single factory, office, store or other worksite.)

There are few regional variations in access to telework, with levels ranging between 6% and 8% of private-sector workers in most of the country. The exception is New England, where 11% of workers have access to it.

Telework is more common in some other countries than it is in the United States. A 2016 Swedish study, for instance, found that “telework has become routine for over 20 per cent of all gainfully employed” in that country. A 2017 study of 30 European countries found that 23% of Danes, 21% of Dutch and 18% of Swedes worked from home “at least several times a month.” The lowest work-from-home rates in that sample, 6% in Bulgaria and Cyprus, were on par with the U.S.

It’s unclear how U.S. workers for whom working from home is now a requirement rather than an option will feel about their new responsibilities. But there have been somewhat analogous situations in the not-too-distant past.

A 2015 New Zealand study, for example, examined home-based teleworking at a government agency following a series of earthquakes in Christchurch between 2010 and 2012. That study found employees felt somewhat more positive about telework than team leaders – perhaps, the authors suggested, because team leaders had “greater demands on them in disaster situations, particularly with regard to maintaining control and coordination of operations.”

For instance, when asked to rate (on a scale of one to five) whether working from home gave them more independence, employees’ average rating was 4.09, versus 3.45 for team leaders. On whether working from home reduced commuting stress, employees’ average rating was 4.11, but team leaders averaged only 3.39. In addition, women were less likely to report positive benefits from telework (enhanced concentration, reduced commuting stress, feeling safer at home) and more likely to report social costs (reduced mutual learning, loss of visibility and career development).

Along with the added stress on managers, the researchers noted, “the extension of work to an individual’s home raises significant legal and employment concerns around the balancing of worker privacy and safety rights with organizational data security.” One way to address such issues, they said: Make telework more widely available and commonly used before disaster strikes.