Climate change has emerged as a key issue in the 2020 Democratic primary season. Candidates are debating how best to address the subject, which many Americans see as a growing national priority. As 14 states and one territory prepare to hold primaries or caucuses on Super Tuesday, here’s a look at how Democrats see climate change – and how their views differ from those of Republicans.

The Jan. 6-19, 2020, October 2019 and September 2019 surveys were conducted using the American Trends Panel (ATP), an online survey panel that is recruited through national, random sampling of residential addresses. This allows for nearly all U.S. adults to have a chance of selection. The surveys are weighted to be representative of the U.S. adult population by gender, race, ethnicity, partisan affiliation, education and other categories. Read more about the ATP’s methodology. A separate survey was conducted Jan. 8-13, 2020, by telephone through a sample of randomly selected U.S. adults.

The share of Americans who say global climate change is a major threat to the well-being of the United States has also increased in recent years. But on this question too, the rise in concern has come primarily among Democrats, regardless of ideology. Among both moderate and conservative Republicans there has been no statistically significant change since 2013. 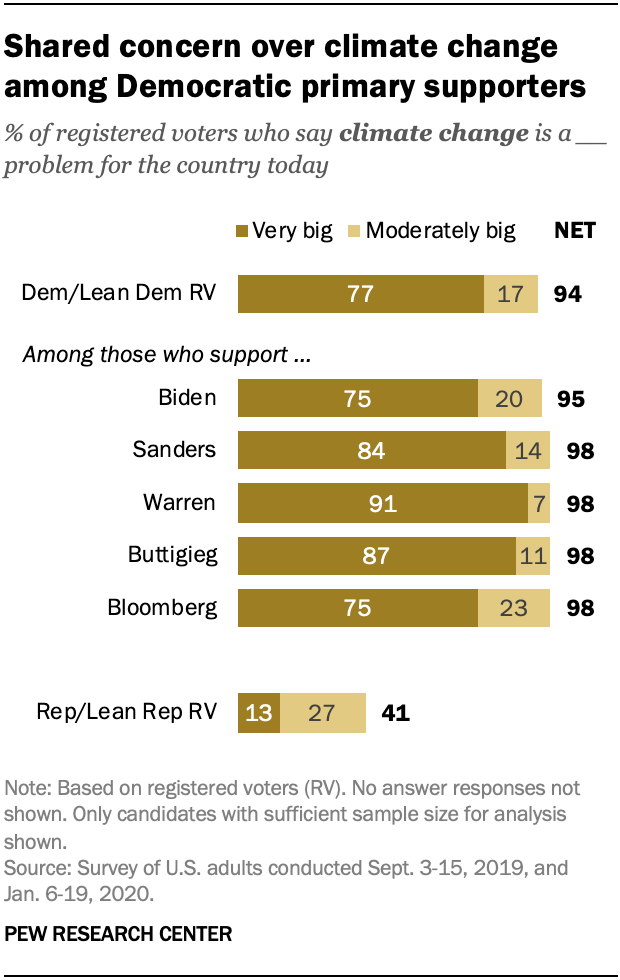 2A near-consensus of Democratic voters say climate change is a problem for the U.S. Among Democratic registered voters (including those who lean to the Democratic Party) who support any of the five leading candidates for their party’s nomination as of mid-January, more than nine-in-ten say climate change is at least a moderately big problem for the country today – including three-quarters or more who say it’s a very big problem. There are some differences in voters’ degree of concern: Joe Biden and Michael Bloomberg supporters are slightly less likely to describe climate change as a very big problem, compared with supporters of other candidates.

As with other issues related to climate and the environment, the partisan divide on this question is large: Just 41% of Republican registered voters (including those who lean to the GOP) say climate change is a moderately or very big problem for the country. 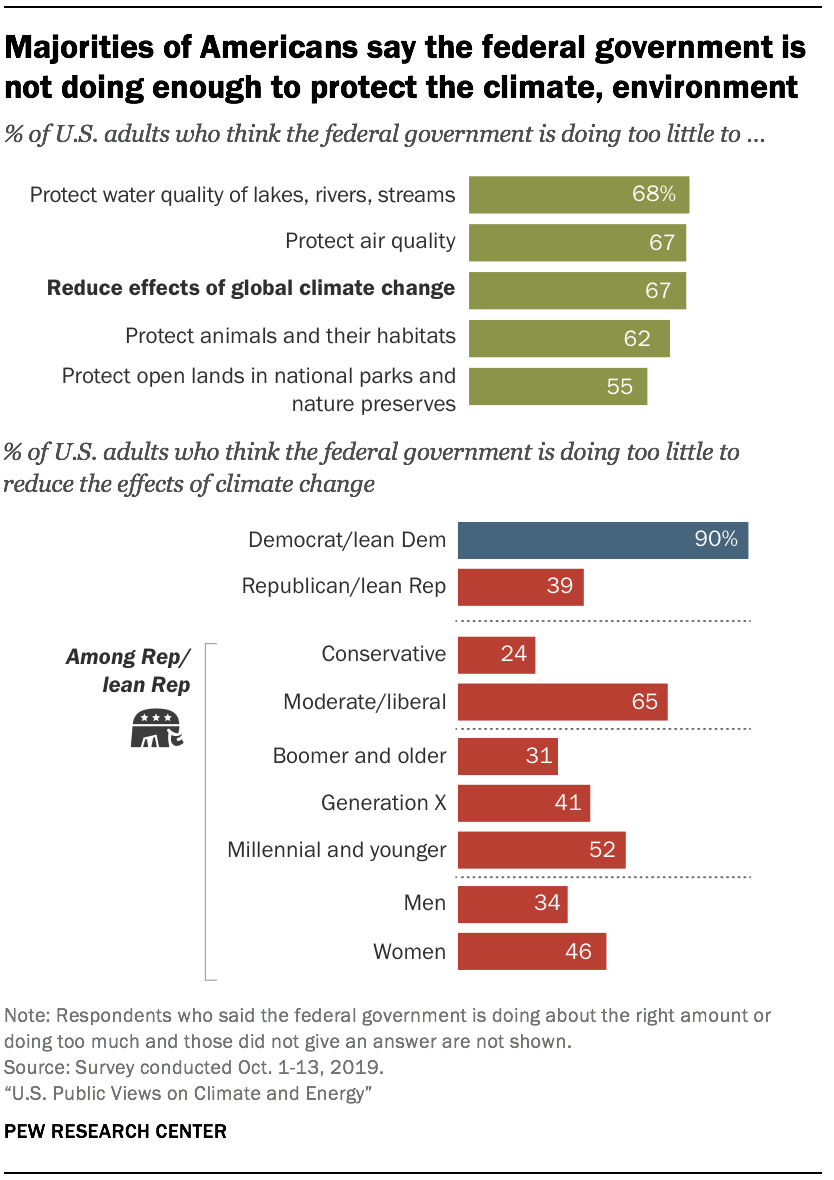 But Republicans differ widely in their views on this issue by ideology. About two-thirds of moderate or liberal Republicans (65%) say the federal government is doing too little to reduce the effects of climate change, compared with roughly one-quarter of conservative Republicans (24%). 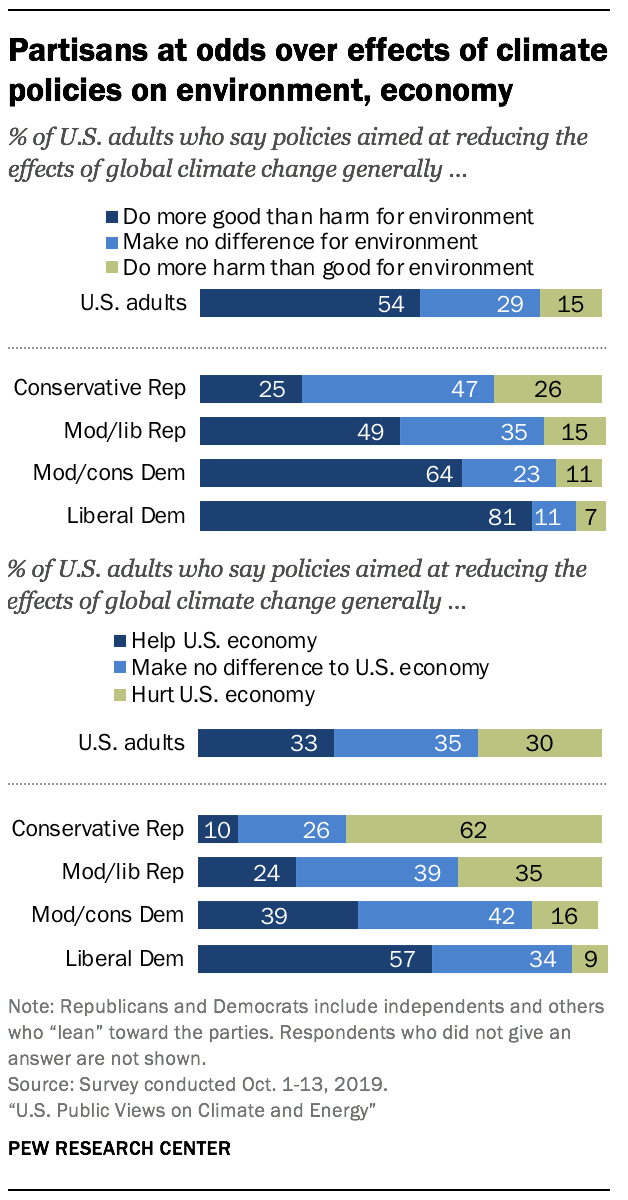 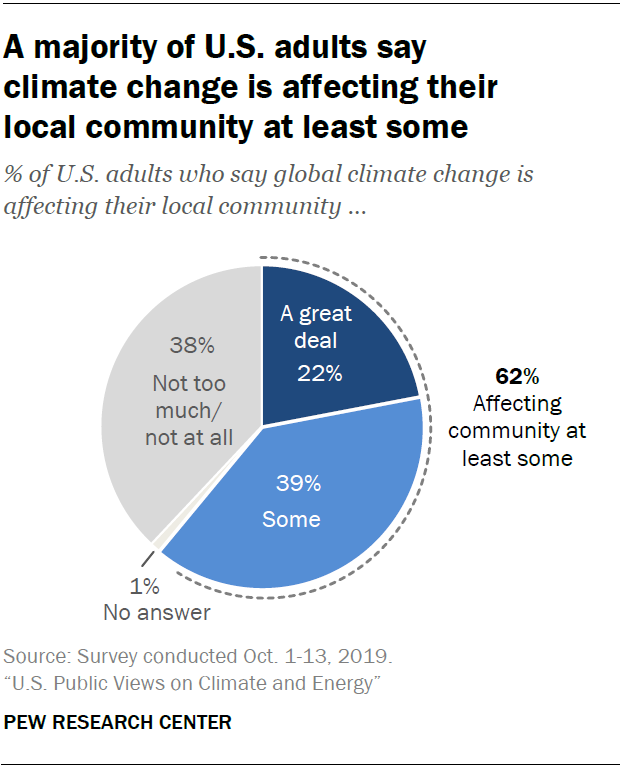 Among Americans who say they’re seeing at least some local effects of climate change, large majorities report long periods of unusually hot weather (79%), severe weather like floods or intense storms (70%), harm to animal wildlife (69%) and forests (67%), and droughts (64%). More than half also say their community has been impacted by more frequent wildfires and rising sea levels (both 56%).