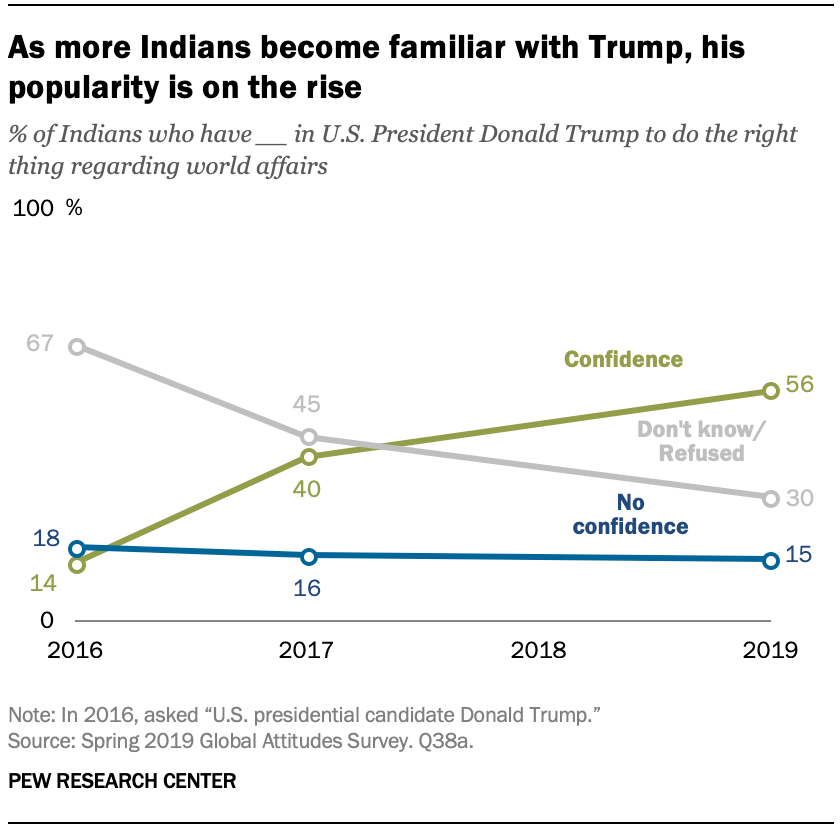 The data for this post on public opinion in India about President Trump and the U.S. is drawn from our face-to-face 2019 Global Attitudes Survey of 2,476 respondents conducted June 24-Oct. 2, 2019.

Those who associate more with Indian Prime Minister Narendra Modi’s Hindu nationalist Bharatiya Janata Party (BJP) are more likely than supporters of the Indian National Congress opposition party to voice confidence in Trump. (Those who are closer to the BJP are also more likely to offer an opinion.)

However, when asked about their views of Trump’s policy on increasing tariffs or fees on imported goods from other countries, about half of Indians (48%) say they disapprove. A quarter approve, and roughly another quarter do not offer an opinion. Those who most identify with BJP are just as likely as Congress supporters to disapprove of this measure and less likely to provide an answer. 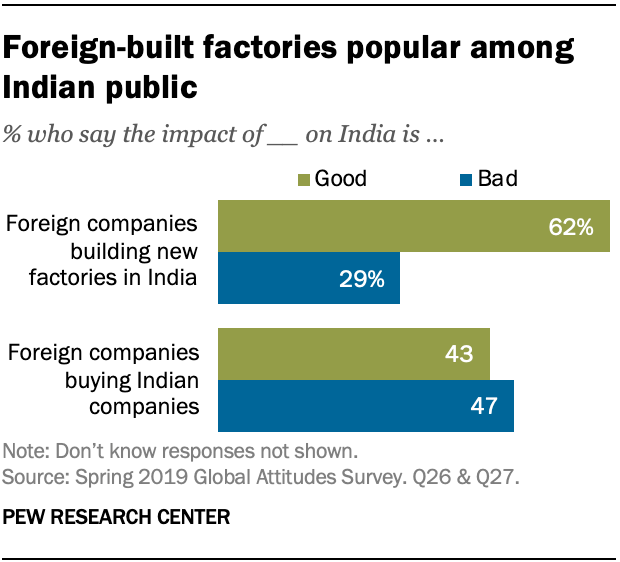 In the past year, the U.S. expanded aluminum and steel tariffs and also stripped India of its preferential trading partner status under the U.S. Generalized System of Preferences that provided better access to American markets and better tariff rates for Indian exporters; the Indian government then issued retaliatory tariffs against the U.S.

One ongoing point of contention for Trump in bilateral trade relations has been tariffs on high-end Harley-Davidson motorcycles imposed by India. Most of the Harley-Davidsons solid in India are not actually subject to trade barriers because they are  made in the country at an American-owned factory located in Bawal.

The Indian public voices much enthusiasm for this kind of so-called “greenfield” investment arrangement, in which a company establishes operations in a foreign country. A majority believes that foreign companies building new factories in India has a good impact on their country, including 24% who say this is very good. This type of investment is more popular than foreign mergers and acquisitions, where a foreign company buys a domestic company outright. Just 43% of Indians say it’s good when foreign companies buy Indian companies, compared with 47% who think that has a bad impact on their nation.

Views of U.S. and Chinese influence on India’s economy

One key goal of Trump’s upcoming trip is for his administration to strengthen its relationship with the world’s largest democracy as a counterbalance to growing Chinese influence around the globe. And India stands out as a prime place for the U.S. president to curry favor: When asked whether having stronger economic ties with the U.S. or China was more important, 62% of Indians pick the United States.

U.S.-Indian relations are held in high regard among Indian adults, with about three-quarters saying current relations overall as well as economic ties are good between the two nations. But when it comes to China, the Indian public is more negative: 61% of Indians say China’s growing economy is a bad thing for their country. And unlike the positive marks India gives the U.S. and its president, views of China and Chinese President Xi Jinping tilt more negative. While 21% of Indians have confidence in Xi, 36% say they lack confidence in him when it comes to world affairs. Likewise, 23% have a favorable view of China while 46% have an unfavorable view of the country. Indians are also much more likely to see the U.S. as an ally and China as a threat. 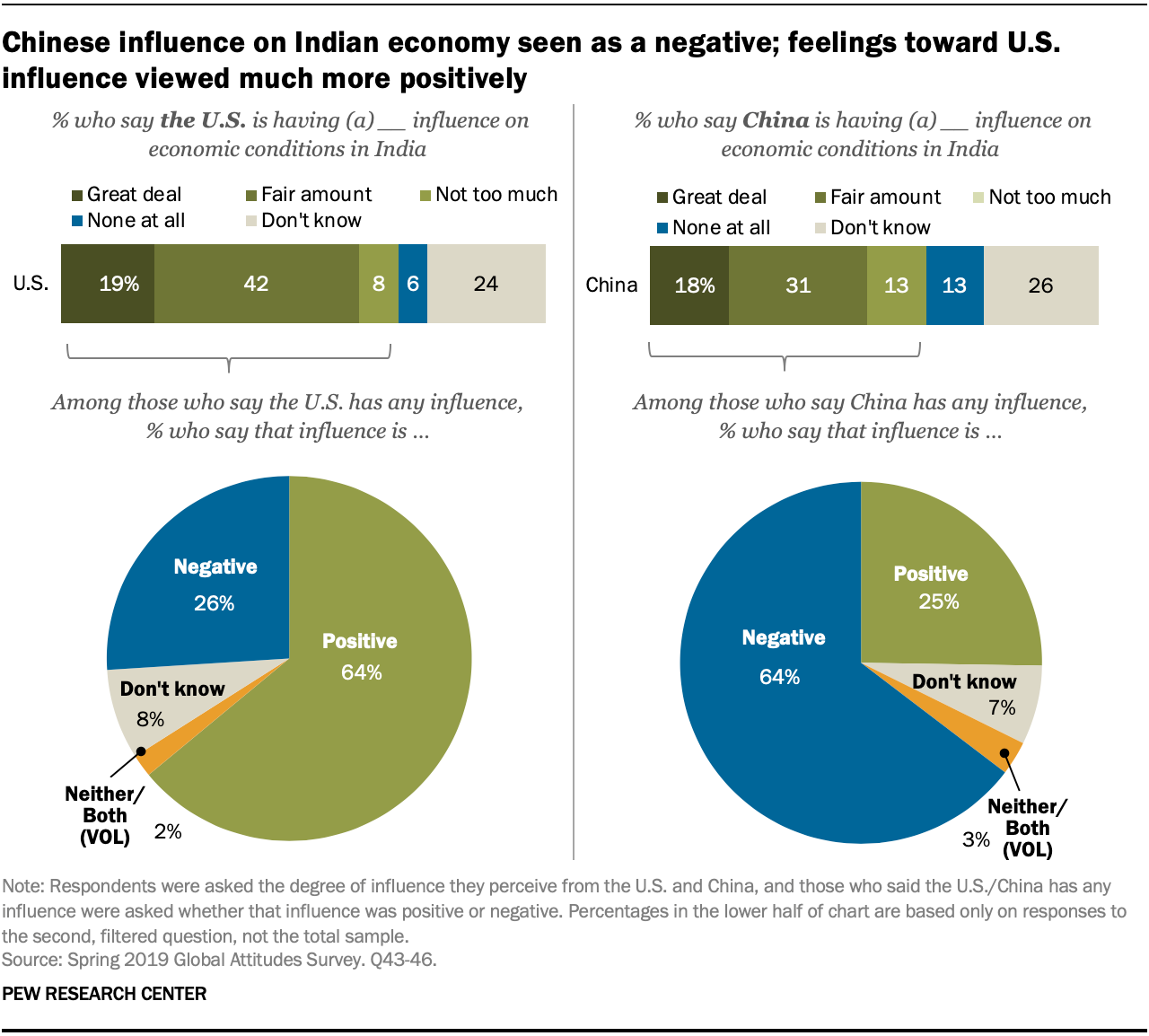 On global affairs, Americans have more confidence in other world leaders than in Trump
People in Asia-Pacific regard the U.S. more favorably than China, but Trump gets negative marks
How people around the world see the U.S. and Donald Trump in 10 charts
Key takeaways on international image of the U.S., Obama and presidential candidates
People in other countries don’t necessarily see U.S. and China in a zero-sum competition