The past decade in the United States has seen technological advancements, demographic shifts and major changes in public opinion. Pew Research Center has tracked these developments through surveys, demographic analyses and other research. As the 2010s draw to a close, here are key ways the country looks different from 10 years ago:

From smartphones to social media, tech use has become the norm. As of 2019, nine-in-ten U.S. adults say they go online, 81% say they own a smartphone and 72% say they use social media. Growth in adoption of some technologies has slowed in recent years, in some instances because there just aren’t many non-users left, especially among younger generations. For example, 93% of Millennials (ages 23 to 38 in 2019) own smartphones, and nearly 100% say they use the internet. 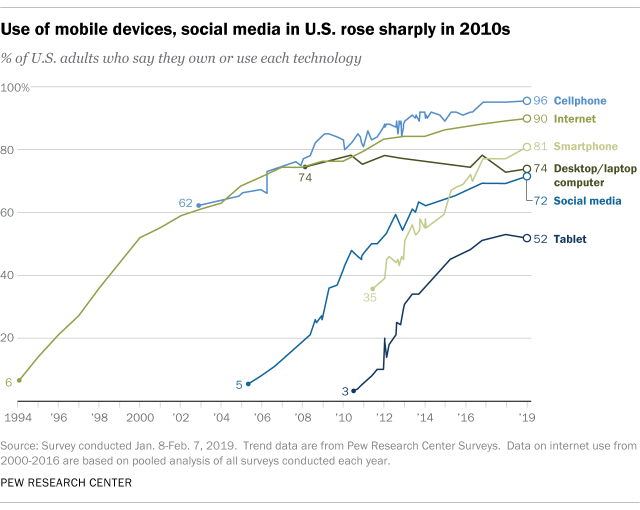 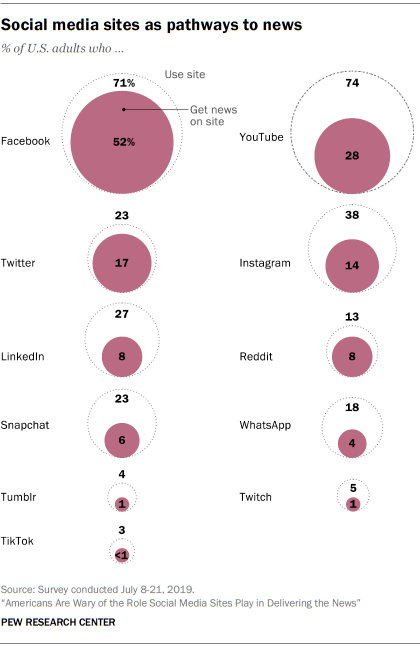 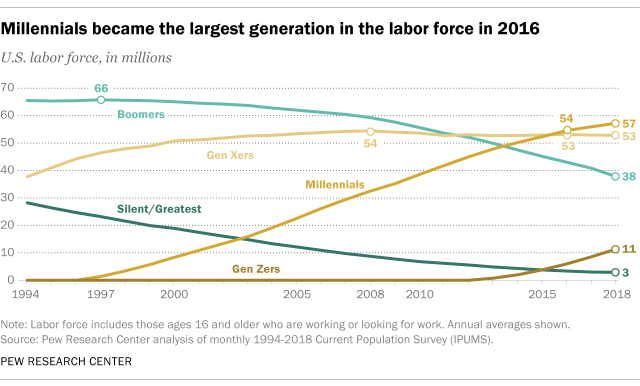 Following the Great Recession, the U.S. unemployment rate declined from a near record high level (9.5%) in the second quarter of 2010 to a near-record low (3.5%) in the second quarter of 2019 (figures are non-seasonally adjusted). Despite the downward trend in unemployment, the recovery in other labor market indicators has been anemic to absent in the post-Great Recession era. For example, the U.S. employment rate in 2019 is several percentage points lower than it was at the start of the Great Recession in 2007, primarily because of the aging U.S. population. 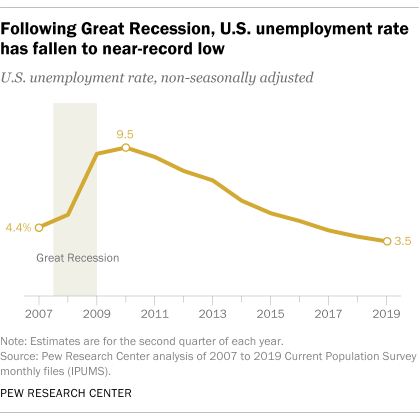 The 2010s will likely be the first decade in at least 160 years to see an increase in the average number of people living in U.S. households. This is in part because of the rising number of Americans living in multigenerational households. In 2016, a record 64 million people, or 20% of the U.S. population, lived with multiple generations under one roof, even with improvements in the U.S. economy since the Great Recession. Another factor behind the increase in household size: More Americans are “doubled up” in shared living quarters. 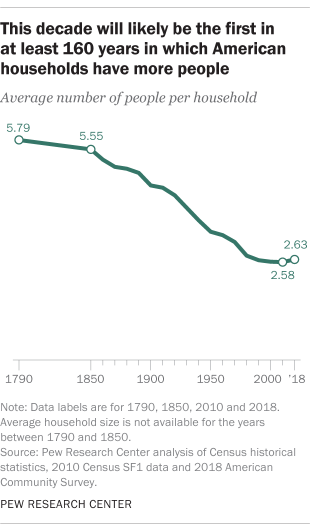 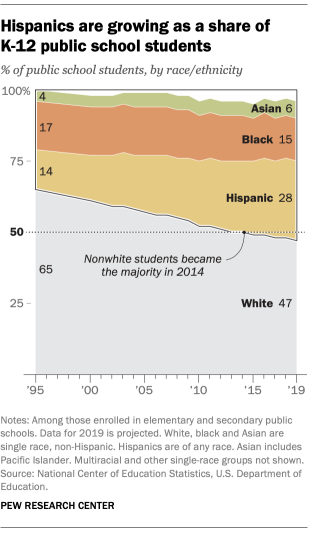 It’s become more common for Americans to attend church a few times a year or less (54%) than monthly or more (45%). This is just one measure by which the religious landscape of the country has changed. Since 2009, the share of Americans who describe their religious identity as atheist, agnostic or “nothing in particular” has grown from 17% to 26%, while the share who describe themselves as Christians has declined from 77% to 65%.

Americans increasingly support the legalization of marijuana. Two-thirds of U.S. adults now back legalization. A little less than a decade ago, in 2010, fewer than half (41%) did so. The change in public sentiment has been accompanied by a changing legal landscape: As of this year, 11 states and the District of Columbia have legalized small amounts of marijuana for adult recreational use, while many others have legalized it for medical use. The drug remains illegal under federal law. 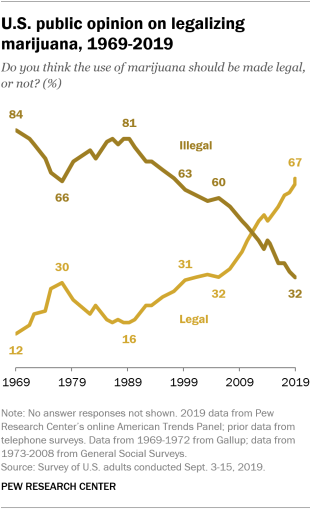 Same-sex marriage has the backing of a majority of U.S. adults. Same-sex marriage is another policy area where support surpassed opposition during the 2010s. As of this year, 61% of Americans favor allowing gays and lesbians to marry legally. In 2015, the U.S. Supreme Court issued its landmark Obergefell v. Hodges ruling, which established that same-sex couples have a constitutional right to marry.

Note: This post contains updated data on the use of smartphones and other technologies, as well as the generational makeup of the U.S. labor force.