The United States stands out to many around the world as the country their own nation can rely on most, according to a new Pew Research Center survey. Pluralities or majorities in around half of the 17 countries where an open-ended question was asked named the U.S. as their most dependable ally going forward. At the same time, substantial shares of people in some countries also perceive Washington as their greatest threat.

Israelis are the most likely to name the U.S. as a reliable partner (82%) among the countries surveyed. In fact, no more than 2% of Israelis name any other country as a dependable ally. In recent years, Israelis have diverged from people in most other countries surveyed with their widespread sense that relations with the U.S. have improved in recent years and that the U.S. is doing more to address global problems. 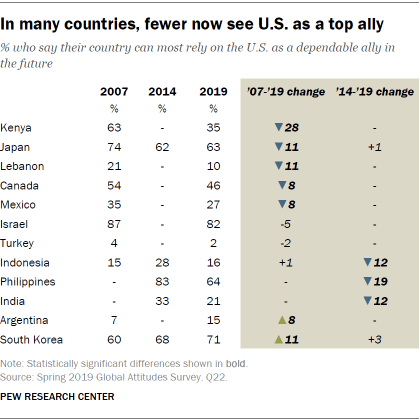 Many of China’s neighbors name the U.S. as their most dependable ally by a wide margin, including South Korea (71%), the Philippines (64%) and Japan (63%).

People in Australia and Canada – countries that, like South Korea, are American allies by treaty – are also more likely to name the U.S. as their top ally than any other country, though fewer than half hold that view. In Canada, this reflects a drop of 8 percentage points since people were last asked their top ally in 2007, from 54% to 46%. At the same time, large minorities of people in these treaty ally countries say the U.S. represents the greatest threat to them going forward, including 20% of Canadians, 13% of South Koreans and 12% of Australians.

There is much more ambiguity over the role of the U.S. in the Latin American and sub-Saharan African countries surveyed. While the U.S. tends to be seen as an ally by the largest share in each of these countries, only around a third or fewer say that (in part because substantial numbers in many of these countries do not offer a response). And, in countries like Nigeria, Kenya and South Africa, nearly as many name China as their most dependable ally as name the U.S. In Kenya, there was a 28 percentage point drop in those naming the U.S. as an ally since 2007 (35%, down from 63%). Only in Lebanon, Tunisia and Turkey do fewer name the U.S. as their most dependable ally than other countries.

Substantial shares in some countries also perceive Washington as their greatest threat – even in some in which the U.S. is the most named top ally. In Mexico, 56% say the U.S. is the greatest threat to their country, while 27% cite the U.S. as their most dependable ally (around 5% say both, concurrently). Recent Pew Research Center surveys found that Mexicans have almost no confidence in U.S. President Donald Trump, and there is widespread opposition to the proposed border wall. The other countries with the biggest shares of people naming the U.S. as a threat include Turkey (46%), Argentina (40%), Brazil (18%), Nigeria (14%) and Tunisia (12%). 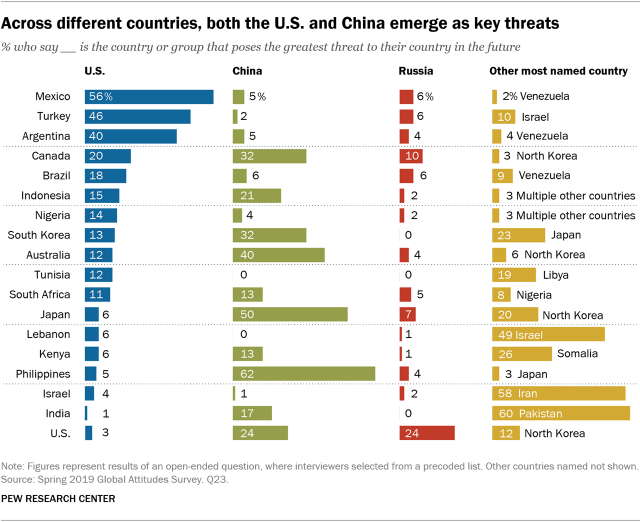 Majorities in most countries agree China’s influence on the world stage has grown markedly, and nearly as many see China as the world’s leading economic power as the U.S. But in no country surveyed does more than a third see China as their country’s top ally. Across the 17 non-U.S. countries surveyed, only a median of 6% cite China as their most dependable partner, compared with 27% who name the United States.

China stands out as a danger particularly among its regional neighbors. It is the country most named as a threat by 62% of Filipinos, 50% of Japanese, 40% of Australians, 32% of South Koreans and 21% of Indonesians. In South Korea and Indonesia, perceived threats from China have also increased by 15 points and 11 points, respectively, since the countries were last asked in 2014. Over the same period, the perceived threat in Japan has fallen 18 percentage points.

China is also the top named threat in both the U.S. (24%) and Canada (32%), up substantially since 2007 in both countries (by 12 and 20 points, respectively). These increased threats are accompanied by record-high unfavorability numbers in both countries and trade-related tensions with the U.S.

Recent surveys find that Russia’s global image is poor, even as people see it playing a more important role in international affairs today than it did a decade ago. But, outside of India (15%) and Turkey (9%), no more than 4% in any country surveyed name Russia as their most dependable ally.

While around a quarter of Americans cite Russia as the greatest threat facing the country, few other countries see Moscow’s role in comparable terms. For example, in Canada, 10% name Russia as their country’s greatest threat – fewer than the 20% who name the U.S. or the 32% who say the same of China.

North Korea is not named as a top ally by more than 1% in any country surveyed except South Korea, where 4% name their neighbor.

While China and the United States are seen as the top threats for most countries surveyed, there are a few regional threats that are of particular concern to specific publics. For example, 60% of Indians name Pakistan as the country that most threatens their own – and this is up from the 45% who said the same in 2014. There is a growing sense that relations in Kashmir – a disputed region between the two powers – has gotten worse in recent years.

Israelis are most apt to name Iran as the greatest threat facing their country (58%), while few in any other country surveyed say the same (only 10% of Lebanese and 6% of Americans cite Iran). Outside of Iran, only Syria (7%) is named by more than 5% of the Israeli population. In contrast, Israel itself ranks as the top threat for Lebanese (49%) and one of the top most named threats in the other majority-Muslim countries surveyed: Turkey (10%), Tunisia (5%) and Indonesia (3%).

Kenyans are most likely to name their neighbor, Somalia (26%), as the top threat facing their country.

Around the world, more see the U.S. positively than China, but little confidence in Trump or Xi
Before Soleimani's death, concerns about Iran had fallen in many countries – including the U.S.
People in Asia-Pacific regard the U.S. more favorably than China, but Trump gets negative marks
How people in 14 countries view the state of the world in 2020
American, Israeli publics see Iran’s nuclear program as a top global threat