Americans agree that religion’s role in public life is ebbing. But while Republicans largely lament the trend, Democrats are split in their reactions. 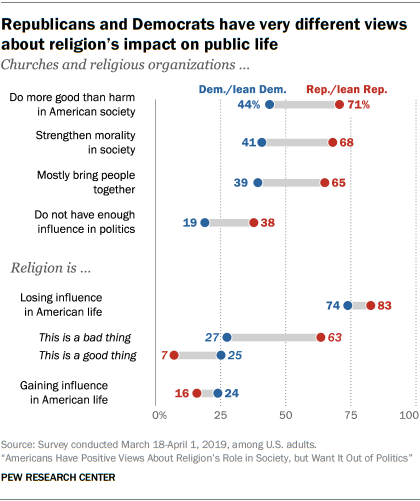 A majority of U.S. adults who identify with or lean toward the GOP (63%) say that religion is losing influence in American life and that this is a “bad thing,” while just 7% say it is a “good thing,” according to a recent Pew Research Center survey. But there is no clear consensus among Democrats and Democratic leaners: Similar shares either say religion’s declining influence is a bad thing (27%) or a good thing (25%), while 22% say that it doesn’t make a difference. At the same time, a quarter (24%) feel that religion is gaining influence in society.

This partisan gap manifests itself in several other ways. Most Republicans say churches and other religious organizations generally do more good than harm in American society (71%), strengthen morality in society (68%) and mostly bring people together rather than push them apart (65%), while fewer than half of Democrats take each of these positions. Republicans also are much more likely than Democrats to say religious leaders have “high” or “very high” ethical standards (76% vs. 57%) and that religious people are generally more trustworthy than nonreligious people (32% vs. 13%), although most in both parties say religious and nonreligious people are equally trustworthy.

Despite these gaps, Democrats and those who lean Democratic are not uniformly secular or anti-religion. In fact, there is a stark divide within the Democratic Party when it comes to views toward religion, much of it along racial and ethnic lines. While white Democrats are relatively lukewarm about religion’s role in society, black Democrats consistently express more positive views. Just 9% of black Democrats and 18% of Hispanic Democrats say it is a good thing that religion is losing influence in society, compared with one-third of white Democrats (33%) who say this. 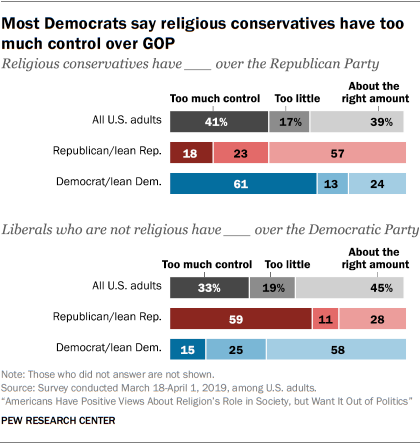 Still, religiously unaffiliated voters make up a growing share of Democrats, while religious conservatives have long been an important part of the Republican coalition. With these patterns in mind, the survey also asked all respondents about the amount of influence that religious conservatives have over the GOP, and the amount of control that nonreligious liberals have over the Democratic Party.