5 facts about unauthorized immigrants in Europe

Senior Researcher Phillip Connor and Senior Demographer Jeffrey S. Passel developed the Center’s estimates of the unauthorized immigrant population in Europe. In this Q&A, they explain the variety of methods and data sources they used, as well as the challenges they faced. You can also watch the video above for a summary of how they arrived at their estimates.

Who is defined as an unauthorized immigrant in your new study of Europe?

Passel: In general, unauthorized immigrants in Europe are defined as those who are not citizens of a European country and do not have valid residency permits. Some entered their country of residence without authorization, while others became unauthorized immigrants after entering on a visa and staying past its expiration date. Our estimates include some people who have temporary permission to stay in a country but face an uncertain legal future – for example, those whose deportation has been deferred. We also included individuals who applied for asylum but are still waiting for a final decision on their application. (Note: In the Center’s new study, Europe includes countries in the European Union, including the United Kingdom, and the European Free Trade Association countries of Iceland, Liechtenstein, Norway and Switzerland.)

Are unauthorized immigrants the same as illegal or irregular immigrants?

Why did you include waiting asylum seekers in your unauthorized immigrant estimates? 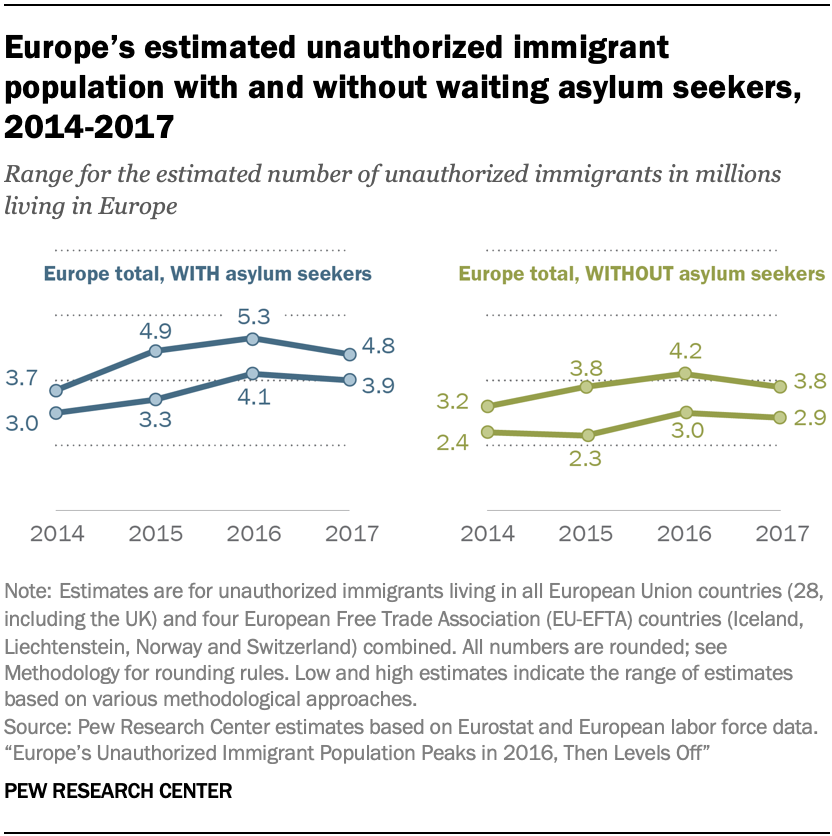 In the case of asylum seekers waiting for a decision on their cases, we included them in our estimate because many entered Europe without permission during the most recent asylum seeker surge. It’s also worth noting that rejection rates on asylum cases are high in many European countries, though this wasn’t a primary factor in our decision to include this group in our estimates. We take a similar approach to our estimates in the U.S.

How did you estimate the number of unauthorized immigrants living in Europe?

Connor: Developing an estimate of the number of immigrants living in a country without authorization is difficult because many in this population prefer to remain hidden. To produce estimates of unauthorized immigrants in each country, and for Europe as a whole, required a thorough assessment of the data available. Depending on the comprehensiveness, recency and completeness of verifiable data sources for each country, we used one of four estimation methods.

The first is referred to as the residual method, which we have successfully used in the United States for more than a decade. In terms of mechanics, the residual method is straightforward: We first determine the total number of noncitizens living in a particular country – in this case, residents who are not citizens of an EU or European Free Trade Association country – and then subtract the number of noncitizens who are authorized to be there. The remainder is the estimate of unauthorized immigrants. We used this technique for 11 countries that were home to 60% of unauthorized immigrants in Europe in 2017.

Estimates of the total number of noncitizens usually come from a national survey (such as a census), a population register (a government database of current residents) or a combination of sources. Since we know not all unauthorized immigrants are included in these data sources, we adjust our estimates in some countries to account for those omitted from the census or population register based on factors like survey quality and previous estimates from other researchers. These slight upward adjustments are consistent with what we do in the United States and have been used previously in the UK.

We used other methods in countries that did not have the data needed for the residual method. In Italy and Greece, we used a second method known as the demographic components method. We started with estimates from 2008, the most recent available. We then updated them by adding information on subsequent births, deaths and new migration, including asylum seekers.

In Spain, we used a third approach, the regularization method, to estimate the size of the country’s unauthorized immigrant population. This involved using data from a Spanish government program that provides unauthorized immigrants in Spain the opportunity to acquire regular immigration status. We used data on the number of immigrants who regularized to project the unauthorized population in Spain into later years. This approach provided a minimum number of people who were at one time living in Spain without authorization; we also added asylum seekers with pending applications to this estimate. 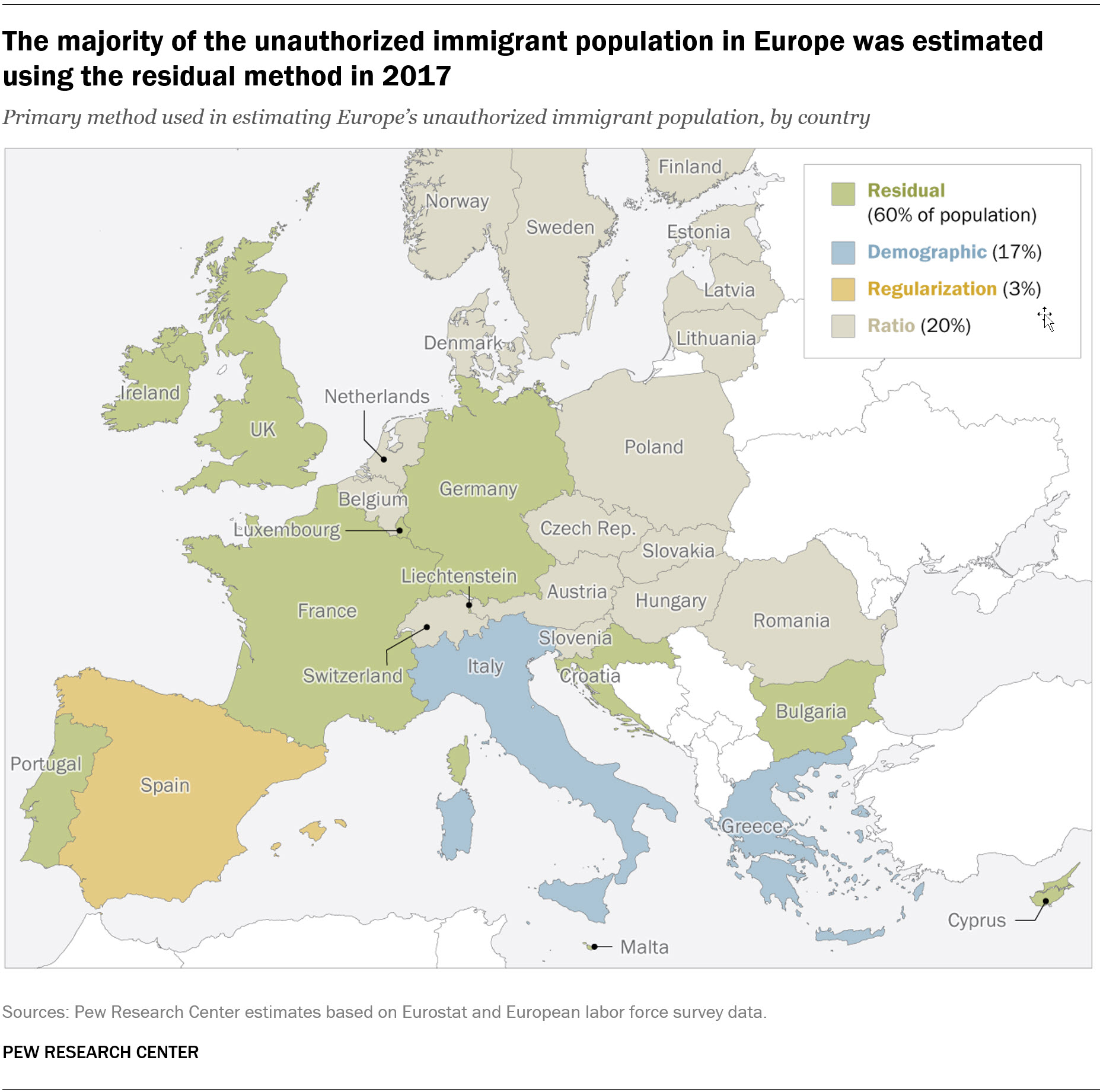 How did you determine the demographic characteristics of Europe’s unauthorized immigrant population?

Passel: Our report includes demographic characteristics like nationality, time living in a country, age and sex for unauthorized immigrants in Europe and select countries. We found that these immigrants are from a diverse set of countries, have generally been in Europe for a relatively short period of time, are majority male, and are mostly under the age of 35. This is the first time such detailed characteristics for all of Europe have been published. To do this, we employed methods similar to those we have used to determine characteristics of unauthorized immigrants in the U.S.

What were the challenges of producing these estimates?

Connor: The Center has 15 years of experience in estimating the size of the unauthorized immigrant population in the U.S., but this is the first time we have estimated the size of this population in Europe. Developing estimates for Europe presented unique challenges, particularly with data.

Our primary data sources were provided by Eurostat, the European Union’s statistical agency. Since data collection practices vary from one nation to the next, we had to determine the best method to use in each country, given the available data. For example, some of the data on noncitizens is based on censuses and surveys while others are based on population registers. Also, some include asylum seekers with pending applications and others do not. Meanwhile, data on unauthorized immigrants may be included in censuses and surveys, but not population registers. To determine the best method, we consulted with data experts, compared various data sources and tried multiple approaches to estimating the unauthorized immigrant population. We also turned to other data sources when Eurostat data didn’t allow us to use our estimation methods.

Connor: The Eurostat data sources we used to estimate the unauthorized immigrant population are available back to 2014. Data from the end of 2017 was the most recent available. Also, it’s common for estimates like these to lag a year or two because it takes time for population data to become available and for researchers to analyze the data to prepare estimates.

Note: For a more detailed explanation of how we estimated the unauthorized immigrant population in Europe, read the report methodology.