The political battle over Brexit in the UK has dragged on for more than three years without resolution, helping to fracture the nation’s politics. A question that has divided British politics – whether to leave the European Union or remain part of it – aligns with attitudes toward the EU, immigration and the country’s culture, but traditional cleavages along party lines and the left-right ideological spectrum still exist on other topics, according to a new Pew Research Center survey.

The survey was conducted among 1,031 UK adults from June 4 to July 20, 2019, before Boris Johnson became prime minister on July 24. Here are its key findings:

1The 2016 EU referendum vote cut across party and ideological lines. Similar to what exit polls after the vote showed, our survey found that people who voted “leave” were on average more likely than those who voted “remain” to be male, older, and have less education and lower incomes, and they were less likely to be from urban areas. 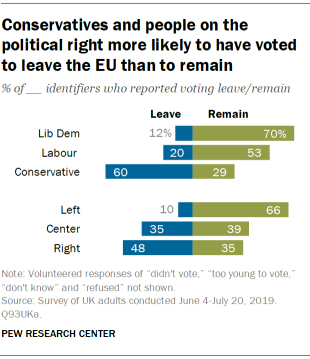 Politically, seven-in-ten Liberal Democrats and about half of Labour identifiers said they voted “remain,” while six-in-ten Conservative supporters reported voting “leave,” our survey found. While these are striking numbers, partisan support does not completely align with vote choice in the referendum, with about two-in-ten Labour and 29% of Conservative supporters saying they voted differently than the majority of their respective parties.

2Remainers and leavers are starkly divided in their views of the EU. 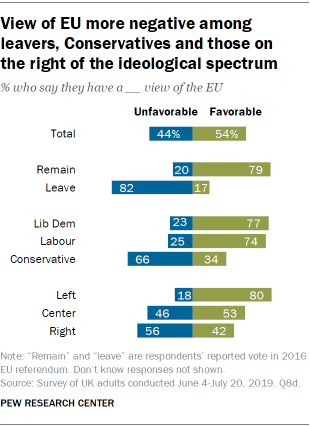 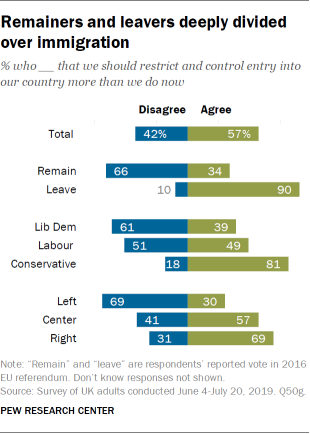 While the leave/remain divide was stark on levels of optimism about the country’s culture, this does not carry over when looking at attitudes toward other domestic concerns. Remainers and leavers were similarly pessimistic about the political system, with only 23% of remainers and 24% of leavers saying they are optimistic. Indeed, greater divides were reflected among partisans and those on the political right and left than among leavers and remainers in views of the political system and other topics. This included relations with Europe, reducing the gap between the rich and poor, the availability of well-paying jobs and the country’s education system. On each of these issues, the difference between leavers and remainers was smaller than the divides between partisans and those on the political left and right.

5Views of the economy are closely associated with party affiliation and where people stand on the political spectrum, less so the EU referendum vote. 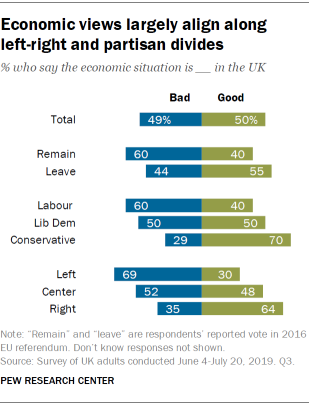 The British public was roughly divided on their views of the economy, with 49% saying that the economic situation is bad in the UK and 50% saying that it is good. Positive views were concentrated among Conservative supporters and those on the political right, with a slimmer majority among “leave” voters. Negative views predominated among those who voted “remain” (60%), supporters of Labour (60%) and people on the political left (69%).

The direction of sentiment about the economy aligns with EU referendum vote choice, party identification and placement on the political spectrum, but the degree of difference within each of these groups vary. Britons on the political right were much more likely than those on the left to have a positive view of the economy (a difference of 34 percentage points), a pattern similar when comparing Conservative and Labour supporters (a 30-point difference).

6Over the period of the Brexit battle, Britons have come to regard their democracy more negatively. In our spring 2019 survey, 69% said they were not satisfied with the way democracy was working in the country. That compares with 55% in 2018 and 47% in 2017.