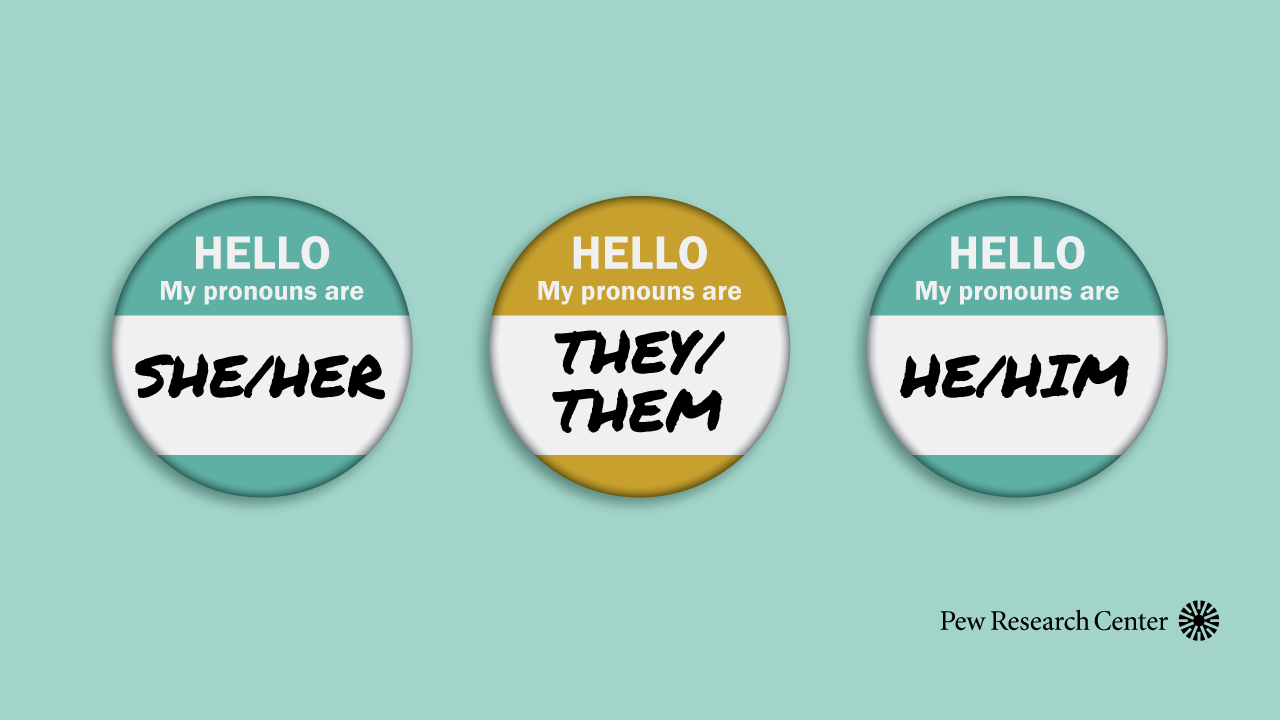 As the experiences of people who don’t identify as a man or a woman have gained attention, a majority of Americans say they have heard at least a little about the use of gender-neutral pronouns. And about one-in-five (18%) say they personally know someone who goes by such pronouns. 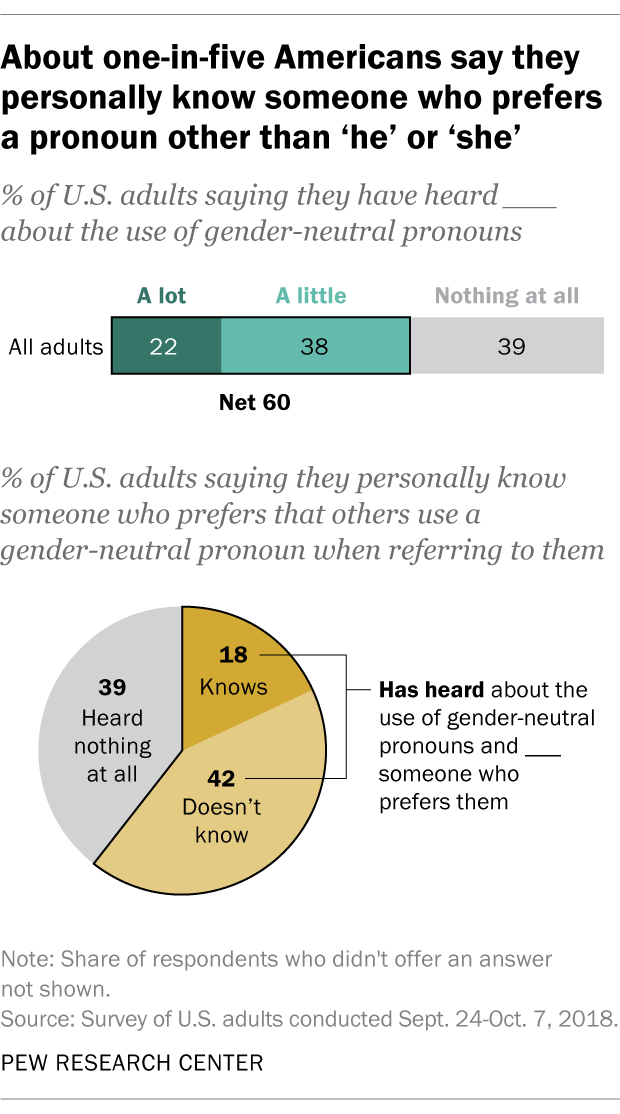 Overall, six-in-ten Americans say they have heard at least a little about people preferring that others use gender-neutral pronouns such as “they” instead of “he” or “she” when referring to them, including 22% who say they have heard a lot about preferences for such pronouns, according to a Pew Research Center survey conducted in fall 2018.

Age and political affiliation are major factors in Americans’ awareness of the use of gender-neutral pronouns. 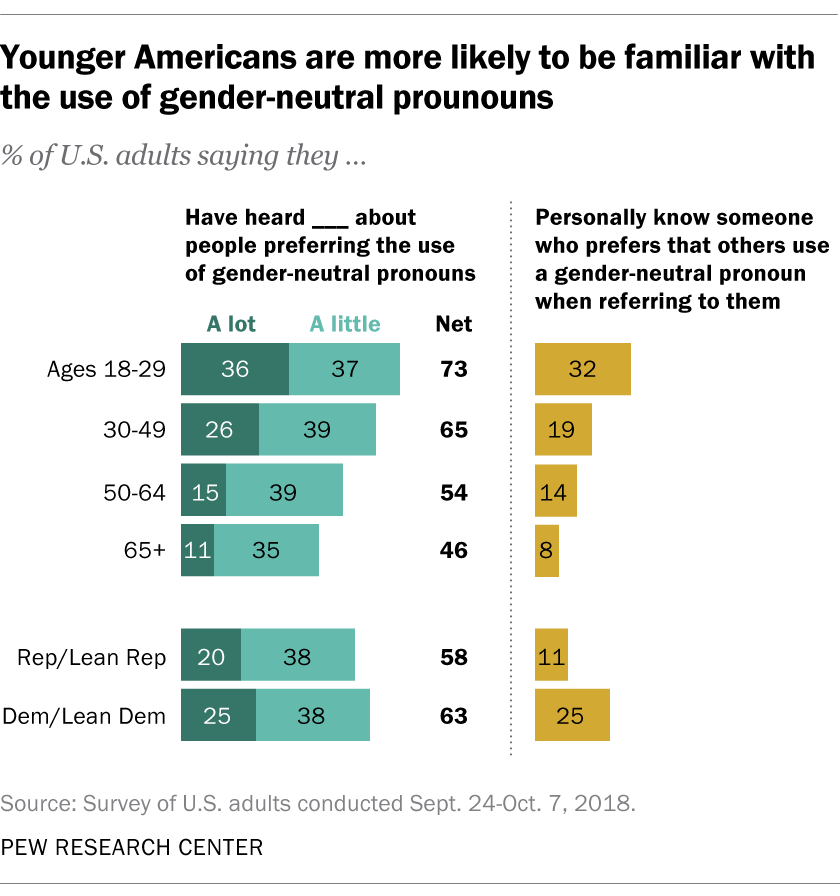 Younger adults are more likely than older adults to say they have heard of people preferring gender-neutral pronouns and to know someone who goes by these pronouns. Roughly three-quarters of Americans ages 18 to 29 (73%) say they have heard a little or a lot about people preferring nonbinary pronouns, compared with about two-thirds of those 30 to 49 (65%) and smaller shares of those ages 50 to 64 (54%) and 65 and older (46%). Meanwhile, about three-in-ten adults ages 18 to 29 (32%) personally know someone who goes by these types of pronouns, compared with smaller shares of older adults.

Are Americans comfortable with the use of gender-neutral pronouns? 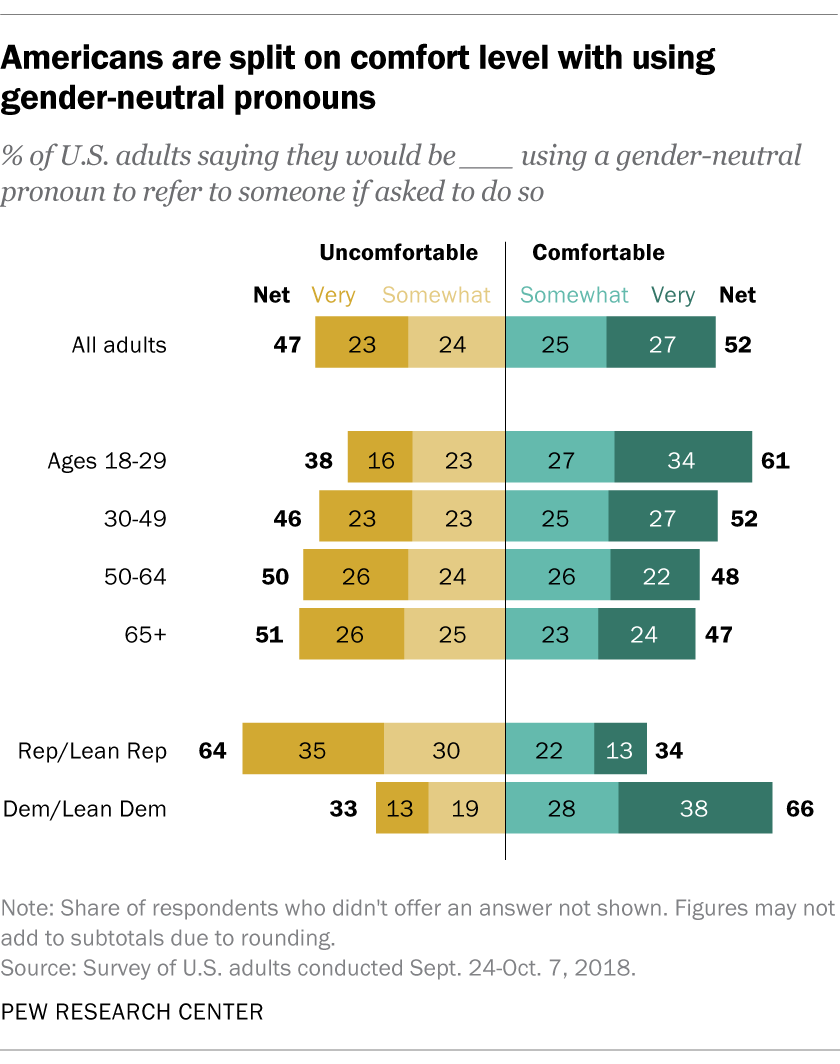 Americans are divided when it comes to their comfort with using gender-neutral pronouns. As is the case with some other questions on nonbinary pronoun use, there are notable differences by age and party on whether Americans feel comfortable using gender-neutral pronouns to address those who ask for it, with young adults and Democrats more likely than older Americans and Republicans to express comfort.

Among Americans ages 18 to 29, about six-in-ten (61%) say they would feel somewhat or very comfortable using a gender-neutral pronoun to refer to someone if they asked them to do so. By comparison, roughly half of those ages 30 to 49 (52%) and 50 and older (48%) express comfort.

About two-thirds of Democrats (66%) say they would be somewhat or very comfortable using these pronouns to refer to someone if asked to do so, compared with 34% of Republicans. Party divides are present among young adults, too: Roughly seven-in-ten Democrats ages 18 to 29 (72%) say they would be comfortable referring to others with nonbinary pronouns, compared with 44% of Republicans in this age group.