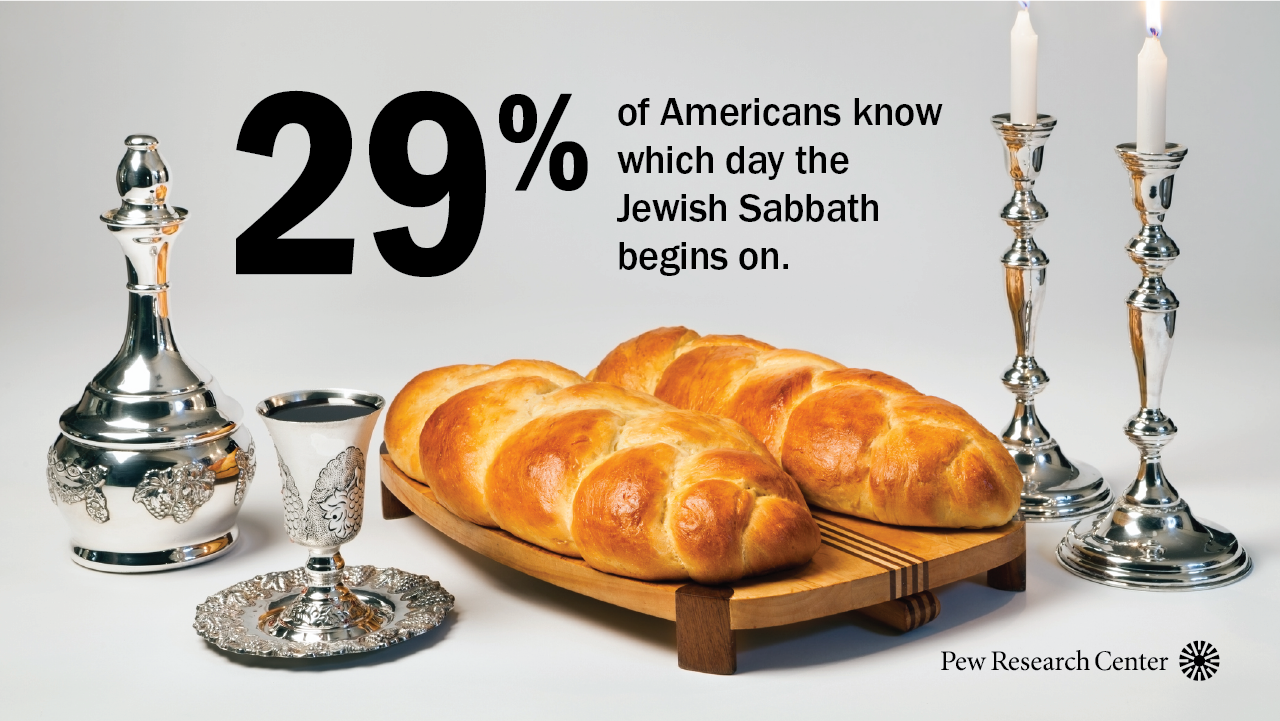 Compared with other Americans, U.S. Jews have relatively high levels of religious knowledge – including about non-Jewish religions like Christianity, Islam and Sikhism. But most non-Jewish Americans are unable to answer some basic factual questions about Jewish practices, including about the Jewish Sabbath and New Year.

This disconnect is apparent in Pew Research Center’s new religious knowledge survey, which asked Americans 32 fact-based multiple-choice questions about religion, each of which had a single correct answer. The survey included questions that gauged knowledge about a range of different religious groups and varied widely in difficulty. (You can test your own knowledge by answering some of these questions in our new quiz.)

On average, U.S. Jews answer about 19 questions right (18.7, to be exact) – considerably more than a variety of other religious groups, including members of several Christian traditions as well as people who say their religion is “nothing in particular.” The only groups comparable to Jews in their levels of religious knowledge are atheists (17.9 questions right, on average), agnostics (17.0) and evangelical Protestants (15.5). While they are more religious than atheists and agnostics, of course, Jewish Americans are on the whole also much less likely than other U.S. adults to consider religion very important in their lives.

Jews, atheists and agnostics also happen to be three of the most highly educated religious categories in the United States. Even so, these groups perform better than others on the survey when controlling for education and other demographic factors.

Not surprisingly, Jewish Americans do especially well on the questions about Judaism. But many also can correctly answer questions about other religions. For example, six-in-ten (59%) know that Jesus spent much of his early life in Nazareth, identical to the share of U.S. Christians who know this. Nearly nine-in-ten know that Ramadan is an Islamic holy month (89%) and that Mecca is Islam’s holiest city (86%), compared with about six-in-ten Americans overall who answer these questions correctly (60% and 62%, respectively). And 71% of U.S. Jews know that Sikhism is the religion that requires men to wear a turban and carry a small dagger, well above the 42% of U.S. adults overall who know this. 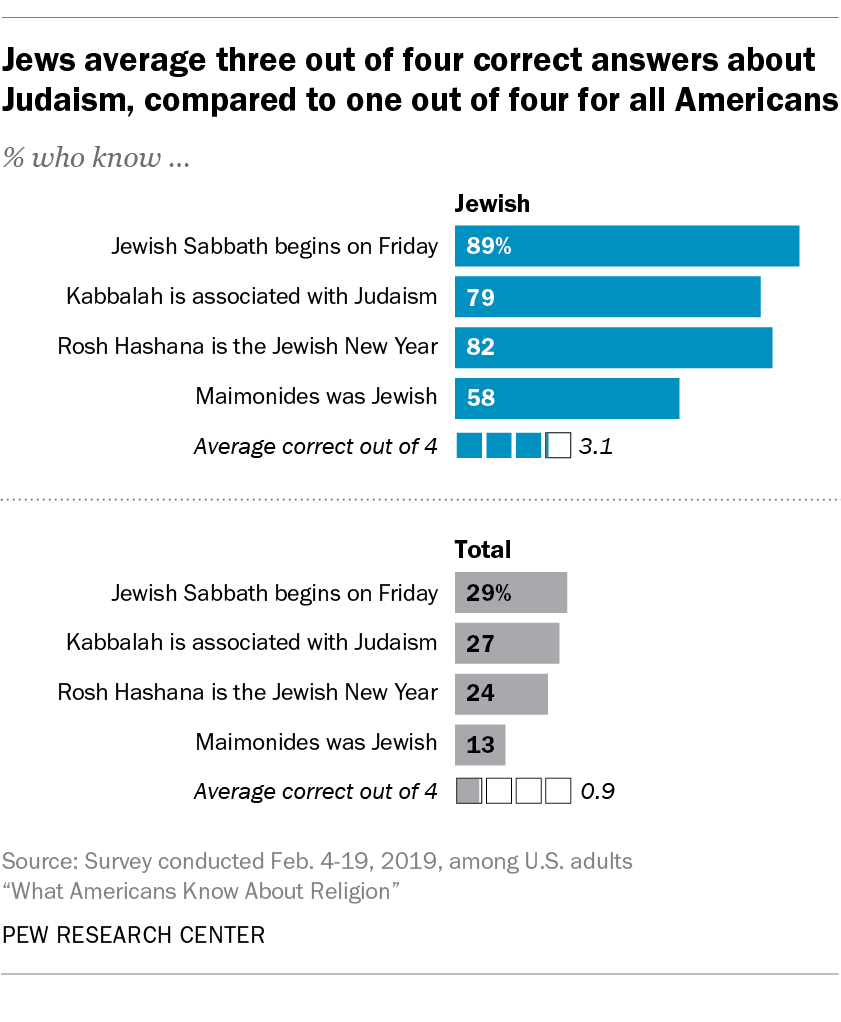 The survey’s four questions about Judaism included two about Jewish holidays, one about Jewish mysticism (Kabbalah) and one about Maimonides, a preeminent Jewish scholar of the Middle Ages. About eight-in-ten Jews or more know that the Jewish Sabbath begins on Friday (89%), that Rosh Hashana is the Jewish New Year (82%) and that Kabbalah is associated with Judaism (79%). The question about Maimonides was one of the toughest on the survey for Americans overall, but still, 58% of U.S. Jews know that Maimonides was Jewish. Jewish respondents correctly answer 3.1 of these four questions, on average.

By contrast, U.S. adults overall answer only about one (0.9) of these four questions correctly, on average. Three-in-ten (29%) know that the Jewish Sabbath begins on Friday, and about a quarter know that Kabbalah is associated with Judaism (27%) or that Rosh Hashana is the Jewish New Year (24%). Just 13% know that Maimonides was Jewish. 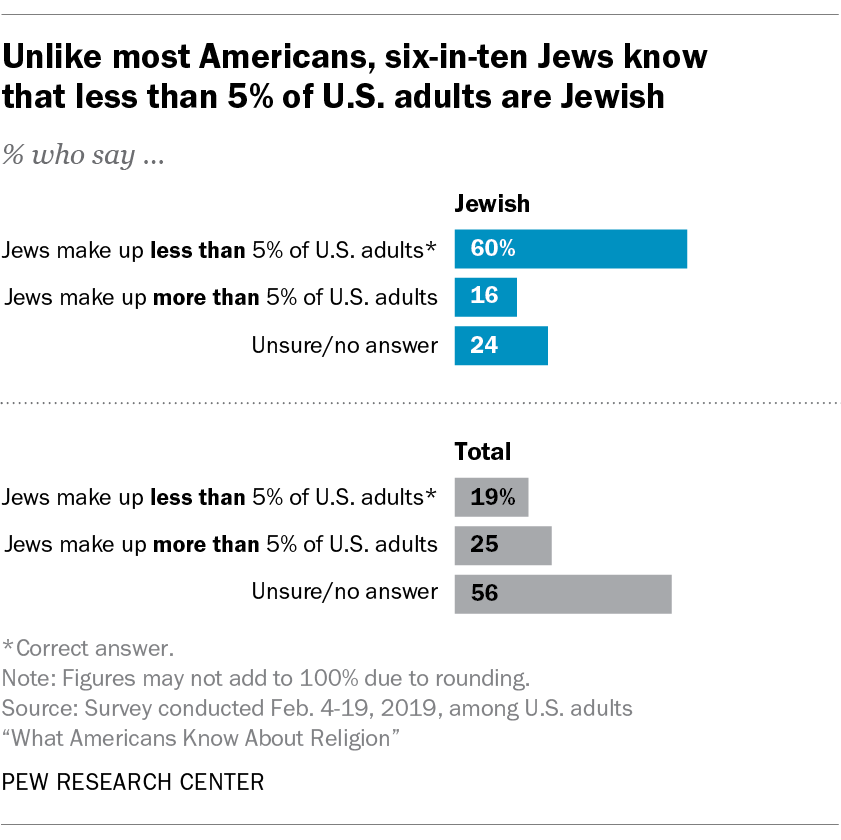 Americans also are largely unaware of the size of the Jewish population in the U.S., which Pew Research Center estimates at around 2%. One-in-five U.S. adults (19%) correctly say that Jews make up less than 5% of the adult population, while a quarter (25%) think they make up a bigger share and a clear majority (56%) say they are unsure. Among Jewish Americans, six-in-ten know that Jews make up less than 5% of all U.S. adults.

The findings from the U.S. religious knowledge survey come amid rising levels of perceived anti-Semitism in the country. A majority of U.S. adults (64%) say Jews face at least “some” discrimination in American society today, according to a March 2019 survey – up 20 percentage points from three years prior.

Overall, Americans feel warmly toward Jews. Indeed, the average rating given to Jews on a “feeling thermometer” from 0 (coldest) to 100 (warmest) is 63, higher than for any other religious group, according to the new survey. Furthermore, non-Jews who know the most about Judaism have even warmer feelings toward Jews than those who know just a little. Among non-Jewish adults in the U.S. who answer at least three of the four questions about Judaism correctly, the average thermometer rating is 69, compared with 62 for non-Jews who get no more than one question correct. There are similar patterns linking religious knowledge with warmer feelings toward Buddhists, Hindus and atheists.