Americans turn to family and friend networks to talk about race and race relations. But who is likely to be having these conversations, with whom and how often depend at least in part on a person’s racial and ethnic identity, age, education and political affiliation, according to a 2019 Pew Research Center survey. 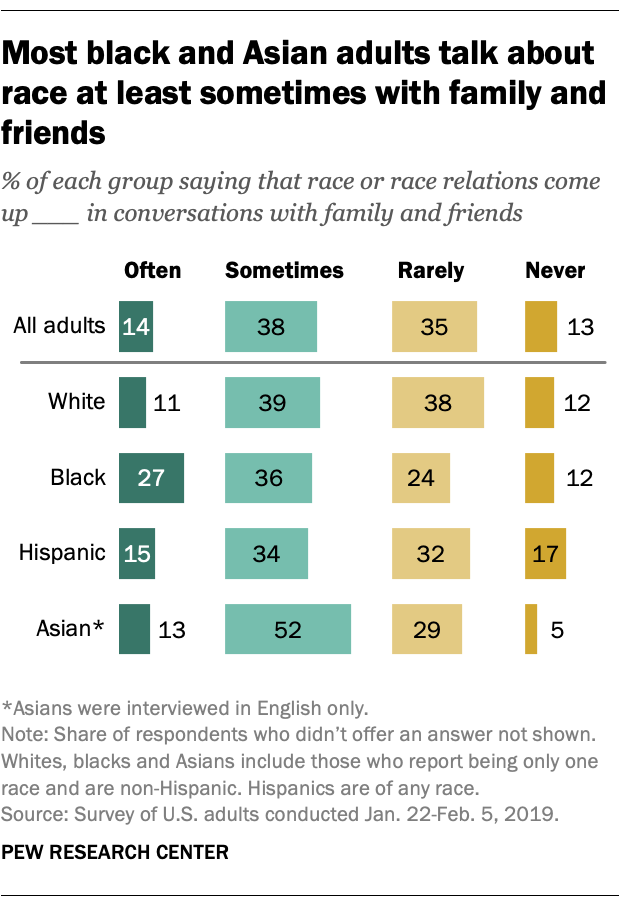 Most black and Asian adults (63% and 66%, respectively) say race or race relations come up in their conversations with family and friends at least sometimes, compared with about half of white (50%) and Hispanic (49%) adults. Blacks are more likely than other racial or ethnic groups to say these topics come up often; 27% of black adults say this compared with 11% of white, 15% of Hispanic and 13% of Asian adults.

There are no meaningful differences in comfort level between men and women or Republicans and Democrats who ever talk about race.

Other differences by education, party affiliation and age 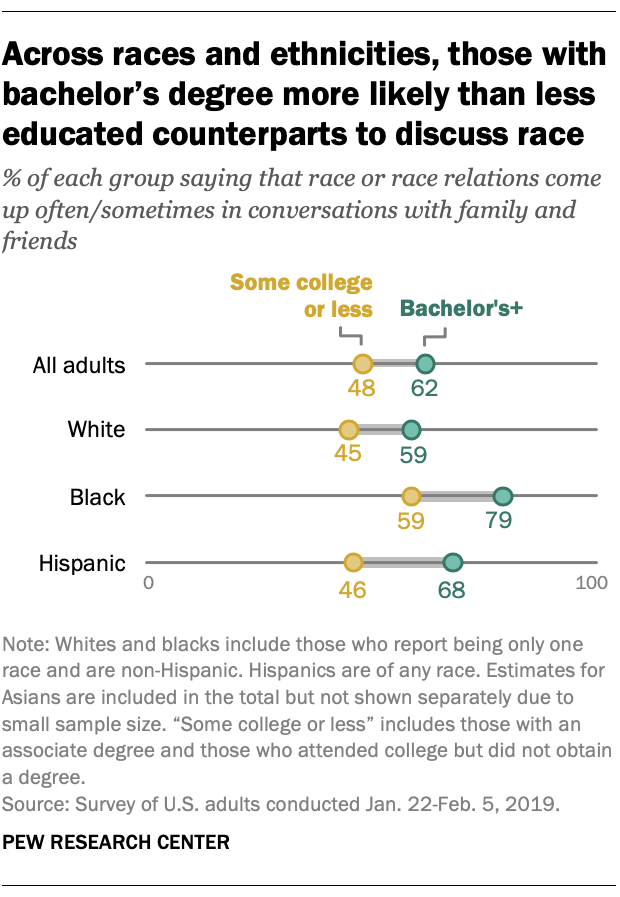 Among whites, blacks and Hispanics, people with at least a bachelor’s degree are more likely to talk about race or race relations at least sometimes than are their counterparts with less education. Still, black (79%) and Hispanic (68%) adults with a bachelor’s degree or higher are more likely than whites (59%) at this education level to say they talk at least sometimes about race relations. (The Asian sample is too small to analyze by education or other demographic factors.)

Party affiliation is also linked to how often people talk about race or race relations with family and friends. About six-in-ten Democrats and those who lean to the Democratic Party (59%) say race sometimes or often comes up in conversations, compared with 45% of Republicans and GOP leaners. This difference also holds when looking only at white Democrats and white Republicans.

Talking about race also varies by age. Among whites, 56% of adults ages 18 to 29 and 57% of those 30 to 49 report talking about race with friends and family at least sometimes, while 45% of whites ages 50 to 64 and 42% of those 65 and older say the same. There are no significant age differences among black and Hispanic adults.

Frequency of these conversations is just part of the story. Among those who say conversations about race come up, even if only rarely, whites (63%) are more likely than blacks (50%), Hispanics (42%) and Asians (37%) to say these conversations generally happen always or mostly with people of the same race as them, rather than a different race.

Most U.S. citizens report a campaign contacted them in 2020, but Latinos and Asians less likely to say so

Racial, ethnic diversity increases yet again with the 117th Congress

Black, Latino and Asian Americans have been key to Georgia’s registered voter growth since 2016