For many Americans, going online is an important way to connect with friends and family, shop, get news and search for information. Yet today, 10% of U.S. adults do not use the internet, according to a new Pew Research Center analysis of survey data.

The size of this group has changed little over the past four years, despite ongoing government and social service programs to encourage internet adoption in underserved areas. But that 10% figure is substantially lower than in 2000, when the Center first began to study the social impact of technology. That year, nearly half (48%) of American adults did not use the internet.

For instance, seniors are much more likely than younger adults to say they never go online. Although the share of non-internet users ages 65 and older has decreased by 7 percentage points since 2018, 27% still do not use the internet, compared with fewer than 10% of adults under the age of 65. Household income and education are also indicators of a person’s likelihood to be offline. Roughly three-in-ten adults with less than a high school education (29%) do not use the internet in 2019, compared with 35% in 2018. But that share falls as the level of educational attainment increases. Adults from households earning less than $30,000 a year are far more likely than the most affluent adults to not use the internet (18% vs. 2%).

Rural Americans are more likely than those who live in urban or suburban settings to never use the internet, but the share who do not use the internet has dropped 7 points since 2018. And due in part to the share of offline whites declining since 2018, blacks and Hispanics are more likely than whites to report that they never go online. (There were not enough Asian respondents in the sample to be broken out into a separate analysis.) 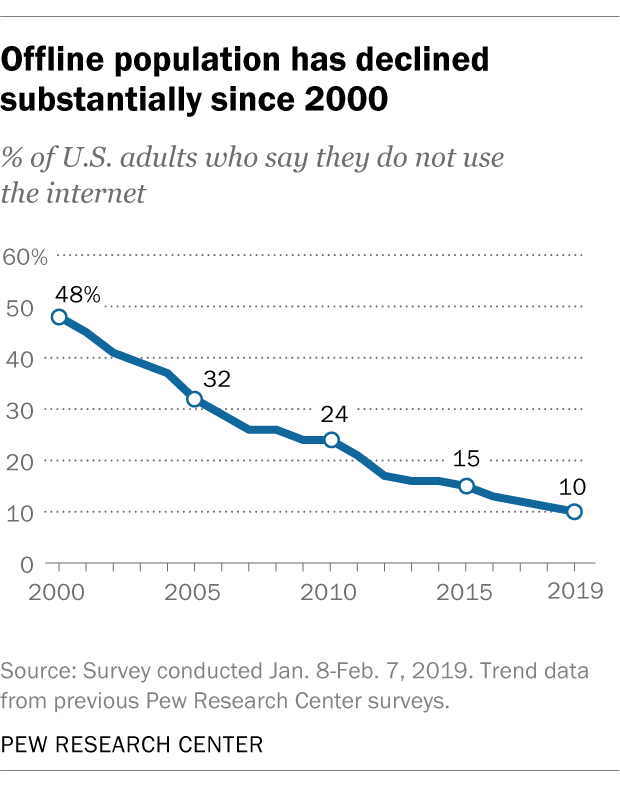 Despite some groups having persistently lower rates of internet adoption, the vast majority of Americans are now online. Over time, the offline population has been shrinking, and for some groups that change has been especially dramatic. For example, 86% of adults ages 65 and older did not go online in 2000; today that figure has been reduced to 27%. Among those without a high school diploma, the share not using the internet dropped from 81% to 29% in the same time period.

A 2013 Pew Research Center survey found some key reasons that some people do not use the internet. A third of non-internet users (34%) did not go online because they had no interest in doing so or did not think the internet was relevant to their lives. Another 32% of non-users said the internet was too difficult to use, including 8% of this group who said they were “too old to learn.” Cost was also a barrier for some adults who were offline – 19% cited the expense of internet service or owning a computer.

Note: Methodology can be found here (PDF). This is an update of a post originally published July 18, 2015.