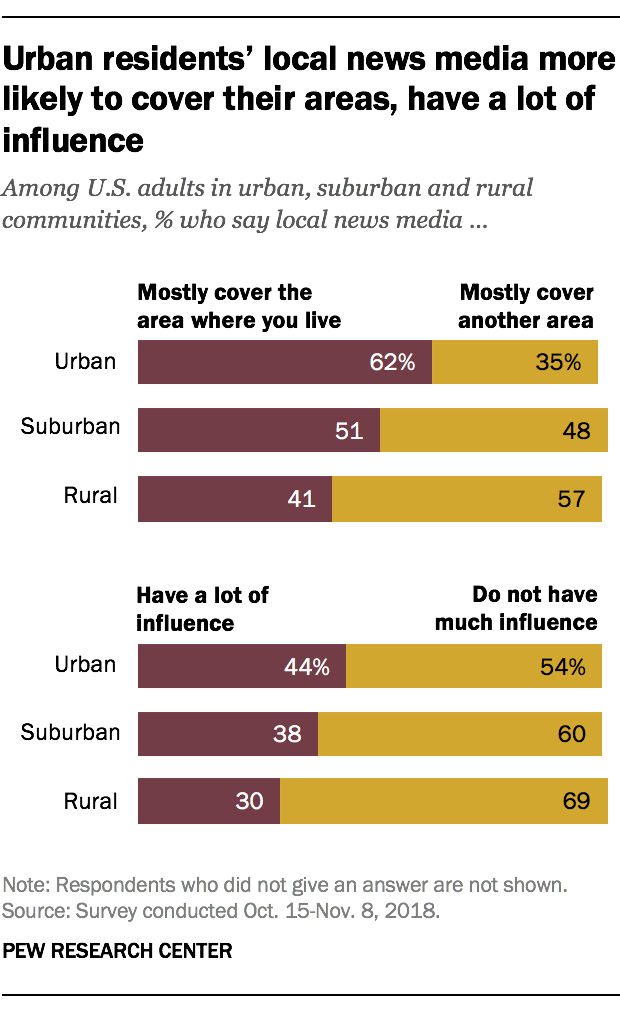 Roughly six-in-ten self-described urban residents (62%) say their local news media mainly cover the area they live in, while a majority of those who describe themselves as rural residents (57%) say the opposite is true – their local news media mostly cover some other area, a concern raised by many journalism watchers following newsroom cutbacks and media consolidation. Self-described suburbanites are more evenly split, according to the survey conducted Oct. 15-Nov. 8, 2018, among nearly 35,000 U.S. adults.

For this analysis, references to urban, suburban and rural communities are based on respondents’ answers to the following question: “How would you describe the community where you currently live?”

There are other areas in which residents of these three community types differ in their views of local news coverage.

All in all, Americans living in urban areas see a greater number of local news topics as vital to their daily lives than do suburban or rural residents. Three-in-ten urban residents say at least five of the 11 local news topics asked about are important for daily life, compared with 21% of adults in suburban and 20% in rural areas.

Previous research by the Center has shown that some differences in views of social and political issues can be attributed to differences in the partisan composition of urban, suburban and rural areas rather than in viewpoints rooted in a particular type of community. Still, when it comes to views of their local news media’s coverage of and influence on the community, news topics that are important to them, and their use of the internet to access local news, the significant gaps in attitudes between urban and rural residents persist even after taking into account party identification.

For more, read the full report and see its methodology.